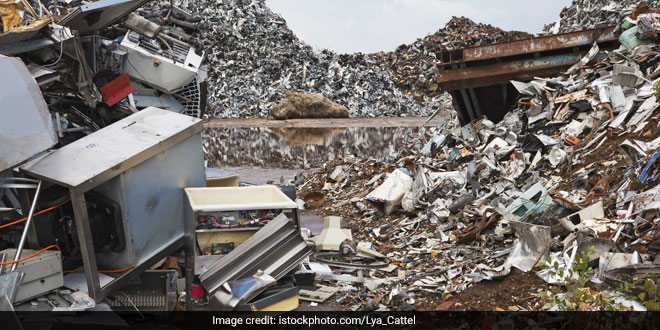 Washington: A new research has detected a variety of emerging synthetic antioxidants, called hindered phenol and sulphur antioxidants, in dust from electronic waste recycling workshops, possibly posing risks for the workers inside. The study has been published in the ‘Environmental Science & Technology Letters Journal’. Previous studies had revealed widespread environmental pollution and human exposure to a class of compounds called low-molecular weight synthetic phenolic antioxidants. In lab experiments, some of these compounds were toxic to rodents or human cells.

In addition to HPAs, compounds called sulphur antioxidants (SAs) are often added to rubber and plastic polymers as “helper” antioxidants. The toxicological effects and environmental occurrence of most of these new compounds are unknown. Therefore, Lixi Zeng and colleagues wanted to investigate the occurrence of emerging HPAs and SAs in dust from e-waste recycling centres — workshops where large amounts of discarded electronics, such as laptop computers, cell phones, tablets, wires and cables are dismantled and processed.

Then, they used liquid chromatography/tandem mass spectrometry to screen for 18 emerging HPAs and 6 emerging SAs. All 24 compounds were detected in the dust: 22 for the first time and some at relatively high levels compared with other e-waste pollutants. Although dust concentrations of SAs were similar for the different categories of workshops, centres that dismantled wires and cables and processed electronic plastics had significantly higher levels of dust HPAs than those that dismantled general e-wastes.

Given the ubiquitous occurrence of emerging HPAs and SAs in e-waste dust, further research is needed on their environmental behaviours, fates, toxicities and risks, the researchers said.

The authors acknowledged funding from the National Natural Science Foundation of China, the Guangdong Special Support Program, the Guangdong (China) Innovative and Entrepreneurial Research Team Program, the Special Fund Project for Science and Technology Innovation Strategy of Guangdong Province and the Fundamental Research Funds for the Central Universities.