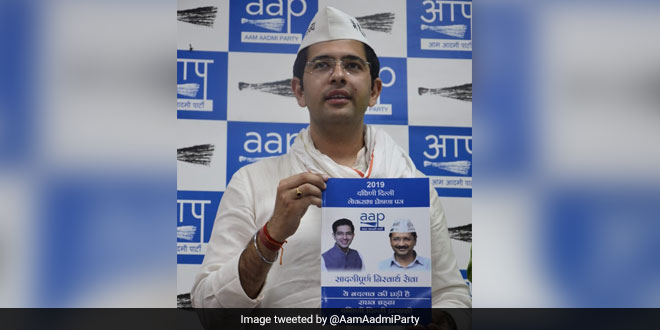 New Delhi: As Delhi prepares to vote on the coming Sunday (May 12), election campaigns are in full swing. From Bollywood actors campaigning for their favorite candidate to politicians playing the blame game, Lok Sabha Elections 2019 is witnessing various shades of political parties. Amidst this, Aap Aadmi Party (AAP), currently the ruling party of the National Capital Territory of Delhi, is releasing seven different manifestos for seven constituencies it is contesting from in Delhi. The sole reason behind separate manifestos is to address constituency wise issues.

As part of this, on Tuesday (May 7), Raghav Chadha, AAP’s South Delhi Lok Sabha Candidate released his manifesto in the presence of party’s Delhi convener Gopal Rai in Central Delhi. Before listing out the plan of action as mentioned in his manifesto, Mr Chadha said,

It’s not just a promise but a resolution to fulfill all the promises we are making right now.

While talking about providing water to one and all in South Delhi, Mr Chadha said,

90 per cent of the areas that were facing terrible water crisis in South Delhi for almost 70 years, now have water on a regular basis because of the efforts put in by AAP in last four years. With the help of Delhi Jal Board, AAP got pipelines in the area and direct supply of water. The remaining 10 per cent of the areas facing water shortage will be equipped with piped water in next one year.

The minister also spoke about how he plans to tackle the problem of air pollution in his full capacity. Promising to provide clean and pollution free air to Delhiites, the manifesto for South Delhi Lok Sabha listed out seven steps the government plans to take. The steps include raising the issue of stubble burning being practised in the neighbouring state of Punjab and Haryana in the parliament and promoting the use of electric vehicles in the city and neighbouring states. To control vehicular pollution in the city, the party plans to create new congestion-free connectivity corridors and implement a sustainable model of pollution control, with the help of relevant ministries.

To deal with the problem of waste and waste burning, the party plans to compel the center to implement appropriate waste disposal policies and put a full stop on open burning of garbage on landfill sites in Delhi.

To promote eco-friendly technologies, the party ideates to organise competitions in schools. Lastly, plans to plant 10,000 trees in the South Delhi region.

The promises have been made. Now, Delhi waits to vote on May 12 and results that will be announced on May 23.

“No One Helped Us”: Family Of Labourers Who Died In Delhi Septic Tank