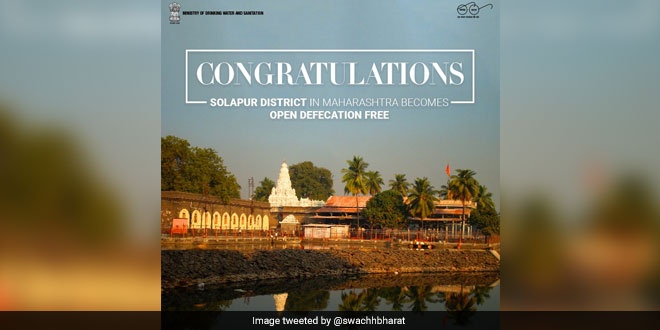 New Delhi: In last three years the sanitation coverage of rural areas of India’s second most populous state, Maharashtra, has jumped from a mere 52 per cent to a staggering 92 per cent. By attaining the title of open defecation free (ODF), major districts like Pune, Nagpur, Jalna, Thane and now Solapur are boosting the morale of rest of rural parts. On November 27, Param Iyer Secretary Ministry of Drinking Water and Sanitation took to twitter and congratulated the Solapur district for achieving 100 per cent sanitation.

The district which is divided into 11 talukas constructed a total of over 4.60 lakh (4,63,418) individual toilets in the last three years. While the Barshi taluka had the highest number of nearly 25,000 (24, 974) of people registering for a toilet subsidy, Solapur North recorded the least number registrations at 7,099. In a bid to fasten the toilet constructing process, the Solapur Municipal Corporation (SMC) had adopted the ‘mass awareness’ strategy from the very beginning.

No change can happen overnight. Eliminating an age old practice like open defecation takes time. There has to be constant triggering process urging citizens to use toilets. Hence we chalked out a plan which would focus more on the toilet usage than its construction. Rallies, awareness workshops, citizen involvement activities and so on were conducted in last three years, said an official from SMC.

Special education drives were carried out in government schools of the district every four-five months. From taking oaths on not defecating in open, holding painting competitions with toilet usage as a theme to giving kids the task of urging neighbours and family members to build toilets, the corporation involved children in the ODF campaign in numerous ways.

The Sidhheshwar Kanya Prashala, an all-girls school was even given a memento recognising their efforts not only towards ODF activity but also for the practice of waste segregation and making eco-friendly Ganesh idols. Another notable activity was conducted in the Walchand Institute of Technology where the ‘Swachh Bharat and Swachh Solapur Mission’ contest was carried out involving young adults.

Vasundhara College students even took out a door-to-door campaign where they personally went to the families and educated them about the disadvantages of open defecation. Several schools had organised a thematic painting competition ‘Jaha Soch – Vaha Shouchalay’ under which the students highlighted the plight of community and public toilets.

On November 19, World Toilet Day, officials and workers from SMC involved citizens and cleaned the public and community toilets as a symbolic activity,

The aim of this cleanliness activity was to urge people to use public toilets without dirtying them, the official said. 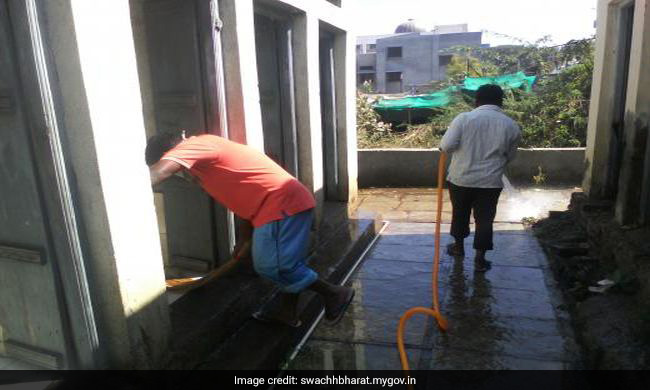 Under the Smart City project, the SMC also constructed e-toilets to prevent open defecation near the Siddheshwar temple. More than 5 lakh pilgrims visit the temple every year and cause an open defecation menace with lack of adequate sanitation facilities available. This year the corporation installed several e-toilets across the district, “The E-Toilets have started contributing to cleanliness and hygiene in the city. Availability of E-Toilets has reduced open urination in the district,” reads a SMC report.

The Solapur police also formed the ‘good morning squads’ to curb the practice of open defecation. The squads that were formed on Rashtriya Swachhta Diwas take rounds in the district and rounds up people relieving themselves in open. Those found defecating in the open for the first time would be counselled and urged to use public toilets. If found more than once the person would then be slapped with a fine upto Rs 500.  In open defecation prone areas, the SMC had even resorted to public shaming last year. Names of people who failed to use toilets would be listed in the local newspaper.

When one looks at the overall picture of rural Maharashtra, with more than 27,000 villages and 11 districts ODF performance of the state is swiftly improving. Till date, more than 45 lakh toilets have been built in the rural areas of Maharashtra.