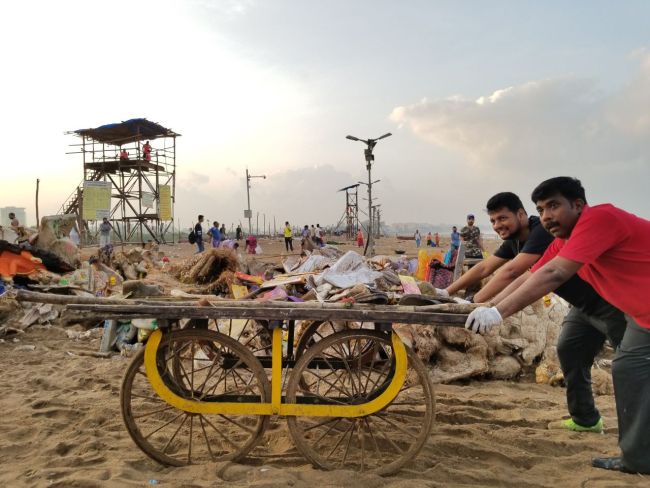 New Delhi: The clean-up of Versova beach will resume soon. The clean-up was suspended by Afroz Shah, the man who has been leading the drive for 109 weeks, mainly because the trash collected by the volunteers not being cleared regularly by the local authorities. But following the suspension support for Afroz and his team poured in from all quarters. From ministers to celebrities and netizens, everyone urged Afroz not to give up. End result, today, Afroz Shah confirmed that the cleanup will begin soon. Speaking with NDTV he said,

“Last week the cleanup never happened, we stopped the cleanup because BMC was not collecting the trash we were collecting. BMC spend last week at Versova and cleared 90 per cent of the garbage, rest 10 per cent will be cleared in a day or two. We are happy to finally see a ground action happening. That was the aim of Versova clean-up that caught the world’s attention – to change the mindset of people towards littering and get the ground work by the authorities going.”

Also Read: “I Am Sorry, I Give Up. Forgive Me My Ocean,” Says Afroz Shah As He Suspends Versova Beach Cleanup After 109 Weeks

We are holding lot of meetings with the authorities to work out a systematic solution, Police has said that from now onwards whenever there is a cleanup planned, support will be provided. Hopefully, I will be able to announce the next clean-up schedule on Twitter, by today or tomorrow.

Thanking the Politicians for their pro-active measures and support for the Versova Cleanup, Afroz added,

Thanks to all the politicians who listened to me so patiently and supported me. Thanks for taking some quick measures. They also agree with me that in our country mindset towards littering is a real challenge. But, that’s what I am working for. It will take time, I know, but sooner or later we will all be successful. When people start working using their hands, they get aware about the garbage and mess they create and that’s why we do beach cleanup every Saturday.

Also Read: Politicians Step In To Assure Their Support After Afroz Shah Suspended The Versova Beach Cleanup After 109 Weeks

For authorities and local politicians who still are reluctant to get the work going, Afroz message is,

Every problem for them is related to issuing a tender, but, I want to tell them – Tender will not make our country clean. It is the work that will help fulfill India’s dream of becoming a clean nation. I think it is high time they should reliase and accept this truth.

Overjoyed with the decision of Afroz to continue the beach cleanup that has been applauded by the United Nations and Prime Minister Narendra Modi, Minister of State for Housing & Urban Affairs, Hardeep Singh Puri added,

“Will take all measures to allow well-meaning citizens to join this unprecedented public service initiative. Vision of PM @narendramodi will resonate & inspire.”

Afroz Shah started the clean-up in October 2015 and since then he and his volunteers have, without a break, relentlessly cleaned up the beach every weekend and picked up more than 9 million kilograms of trash. Impressed with Afroz’s model, the Ministry of Environment and Forests (MoEF), had decided to replicate Afroz Shah’s Versova Model for 13 other beaches across the country. Afroz has also been awarded the UN’s top environmental accolade — Champions of the Earth award.

The swachh warrior signs off by saying,

I am just not working for beach cleanup. My real motto is to spread awareness about marine litter and how it is affecting the planet we live in. I am going to many schools in Mumbai, trying to educate the young lot of our society about the problem so that they can take care of the planet in future.