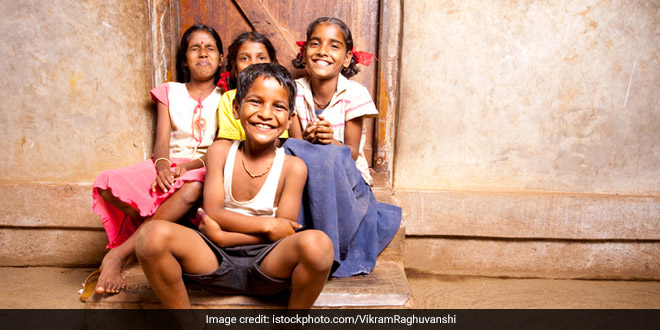 New Delhi: In a recently released data from the first phase of the fifth round of National Family Health Survey (NFHS-5) covering 17 states and five union territories, Maharashtra has shown little to no improvement in key health indicators like infant and child mortality, malnutrition and anaemia. According to the report released by Union Health Ministry on December 13, last year, neonatal mortality rate that is the number of children dying within 28 days of birth has increased since the last NFHS conducted in 2015-16. Similarly, the nutritional status of children is not very encouraging as the prevalence of overweight and stunted (low height for age) children have increased significantly. A rise in levels of anaemia among children, women and men in Maharashtra is also a cause of worry. However, child immunisation, menstrual hygiene practises and access to drinking water and sanitation has improved.

Here’s a look at Maharashtra’s performance in terms of health parameters: 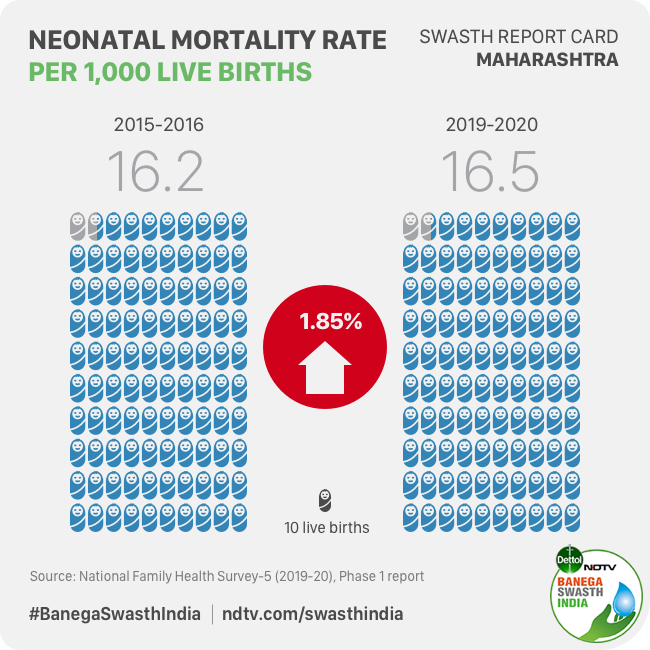 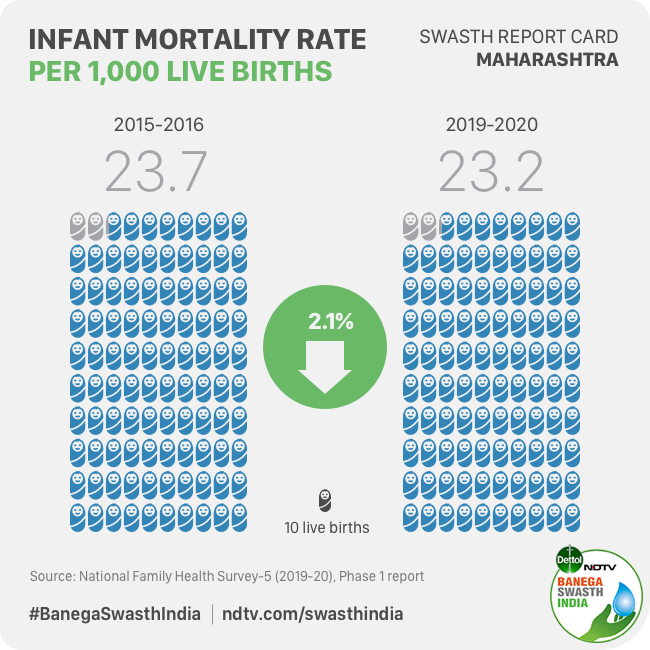 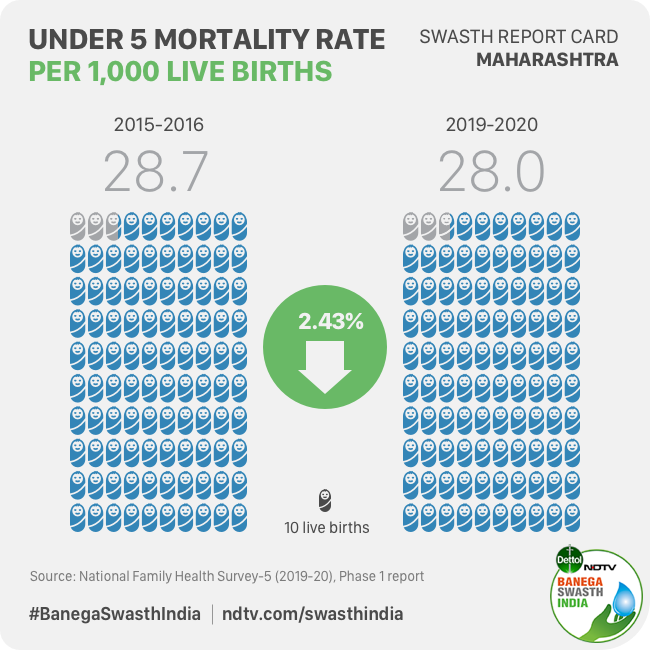 According to the survey, the state has reported an improvement in full vaccination coverage among children aged 12-23 months, among those surveyed. Child vaccination has increased from 56.2 per cent in NFHS-4 to 73.5 per cent in NFHS-5. According to the Ministry of Health and Family Welfare, full immunisation implies vaccinating children with BCG (Bacille Calmette-Guerin) which is a vaccine for tuberculosis (TB), vaccines to prevent measles – MMR (measles, mumps, and rubella) and three doses each of polio (excluding polio vaccine given at birth) and DPT (diphtheria, pertussis, and tetanus). 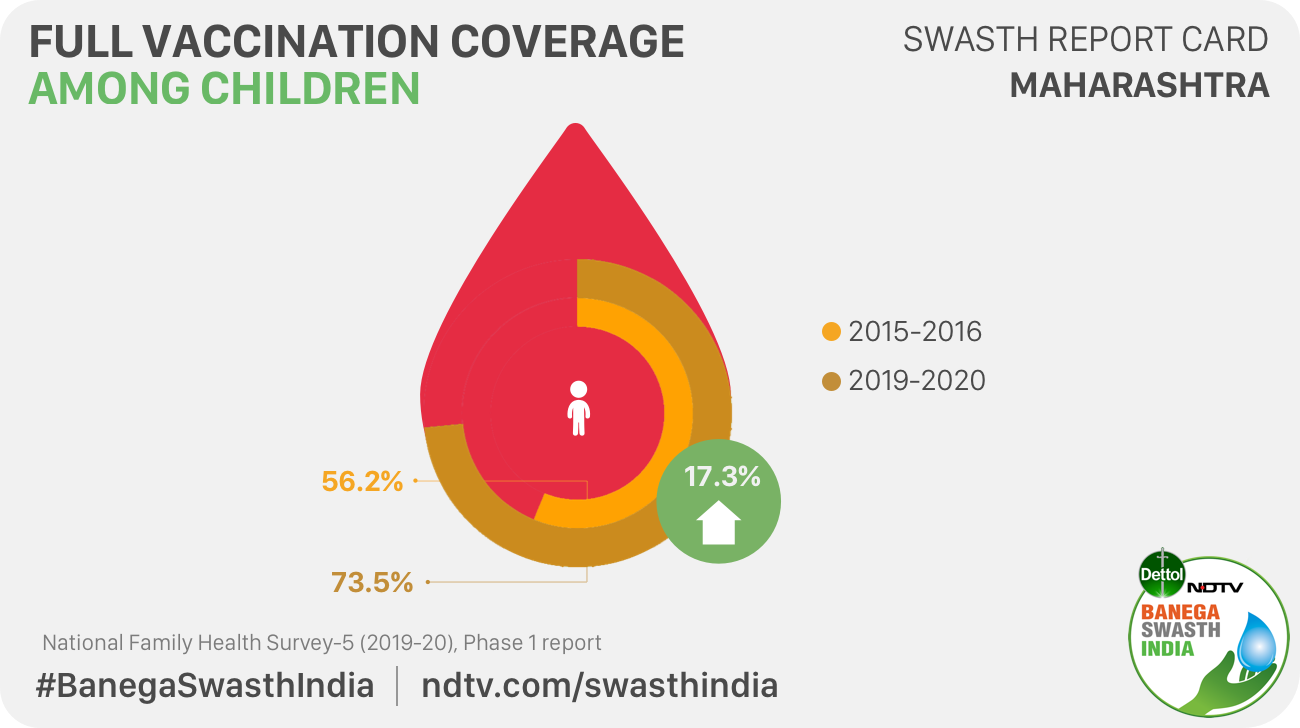 WHO (World Health Organization) recommends initiating breastfeeding within the first hour of the birth of a child. NFHS-5 data shows that among the children surveyed in Maharashtra, breastfeeding in the first hour of birth has shown a downward trend when compared to the data recorded under the NFHS-4. 53.2 per cent of the children were breastfed within one hour of the birth in 2019-20 whereas 57.5 per cent were breastfed in 2015-16.

However, 14.4 per cent increase in children exclusive breastfed till completion of 6 months is encouraging. 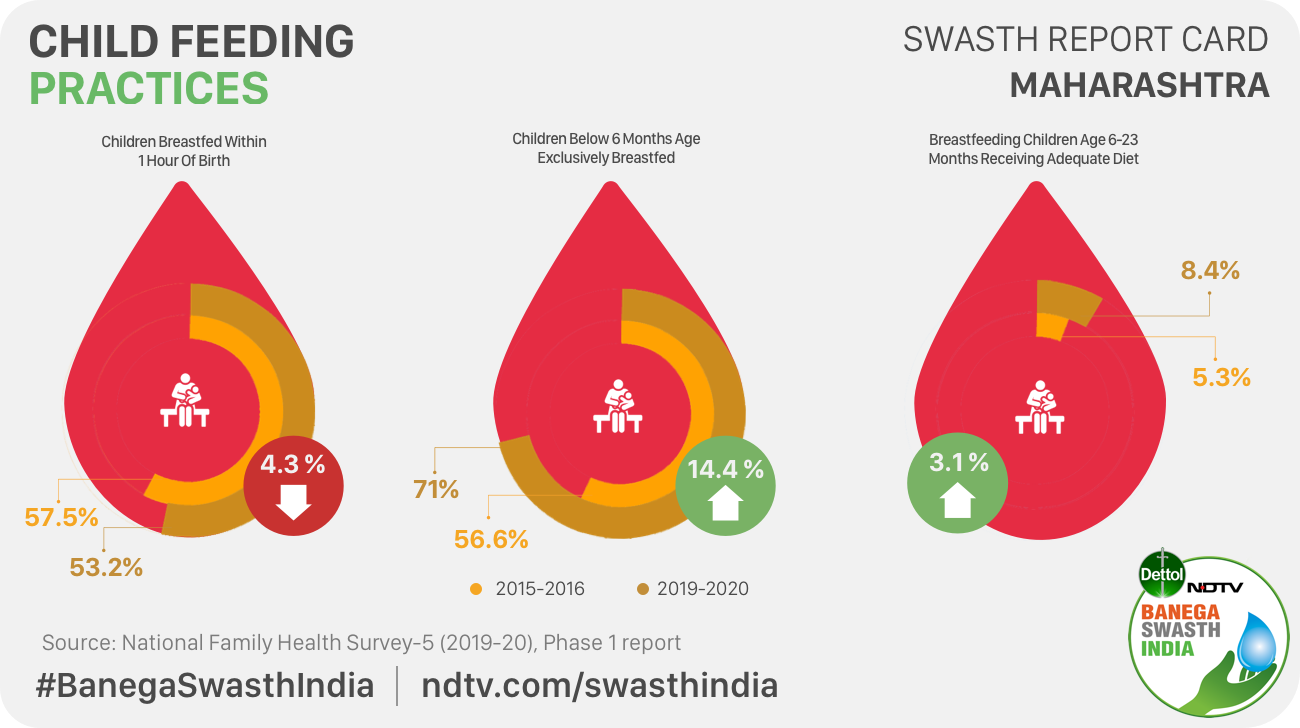 While early initiation of breastfeeding has declined in Maharashtra, the percentage of children exclusively breastfed for first six months has improved

Malnutrition, Especially Sudden Rise In Obesity Among Children Is Worrying

Malnutrition is a medical condition caused due to an unbalanced diet that has deficiencies, excesses or imbalance in a person’s intake of one or more vital nutrients. The word malnutrition is an umbrella term covering underweight, child stunting, child wasting, micronutrient related deficiencies and overweight or obesity.

Child wasting or low weight for height has remained unchanged at 25.6 per cent. But the prevalence of children who are severely wasted have recorded a growth of 1.5 per cent. 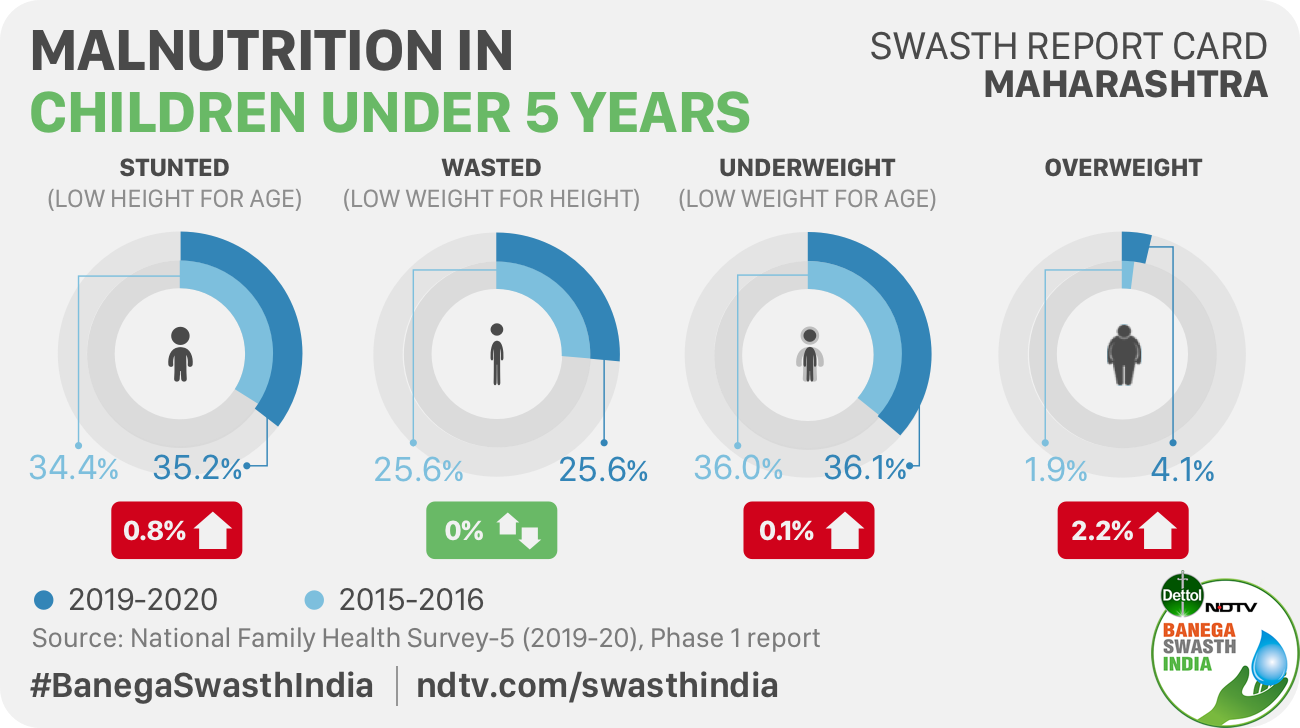 The data from NFHS-5 reveals the importance of nutrition more than ever before as the nutrition indicators have not fared well. Institutional births, immunisation, pre and post-natal services have improved but to improve the nutrition indicators community based care approaches are more pertinent. To effectively carry out community based approaches to child care, community mobilisation and community engagement is much needed. Nutrition specific and sensitive interventions should be targeted to reduce multiple forms of malnutrition.

Further elaborating on the steps needed to eradicate malnutrition and improve the nutritional status of children, Dr Ranjan said,

While NFHS-4 conducted in 2015-16 reported a decline in anaemia levels, recently conducted NFHS-5 shows an upsurge hinting towards reverse in gains made in the past. Children (6-59 months) with Haemoglobin (Hb) levels less than 11 gm/dl are considered anaemic. As per NFHS-5, anaemia among children (6-59 months) in Maharashtra has recorded a jump of over 15 per cent moving from 53.8 per cent in 2015-16 to 68.9 per cent now. 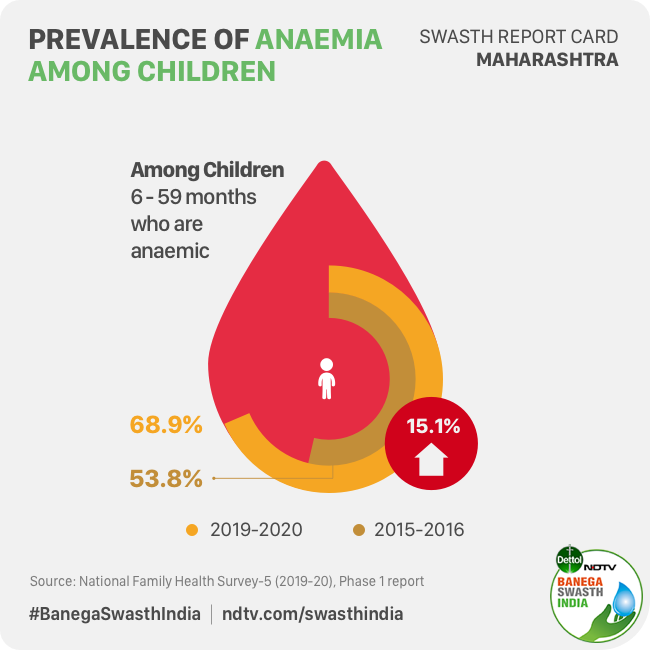 Prevalence of anaemia among children of Maharashtra has increased: NFHS-5 phase 1 report

Women belonging to the age group 15-49 years also seem to be widely affected by anaemia. About 54 per cent of these women are anaemic and there has been a spike of 6.2 per cent from NFHS-4 conducted in 2015-16, when anaemia prevalence was 48 per cent among women in this age group. 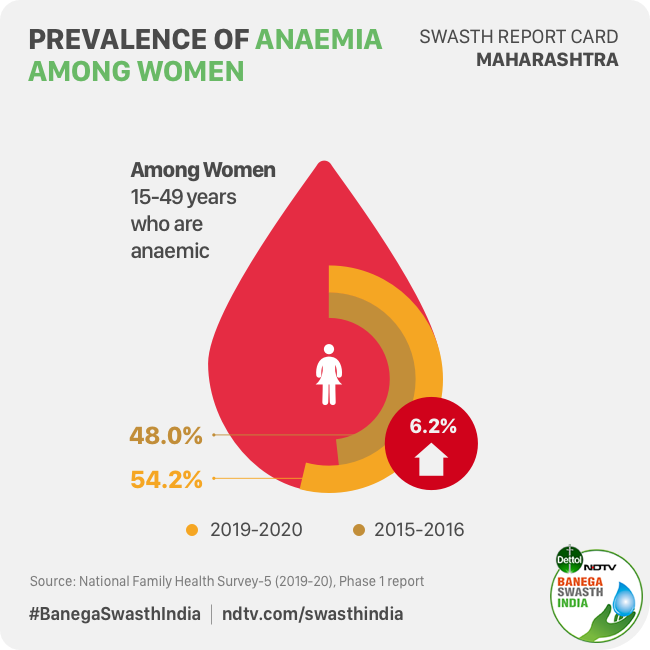 Anaemia has increased among women in Maharashtra, reveals findings of NFHS-5 phase 1 report

Also Read: How Haryana Is Fighting Anaemia And Improving Its Score Under Anaemia Mukt Bharat Campaign

According to the experts, if a woman is anaemic and lives undernourished throughout her life, it is passed on to the baby. Talking about the rise in anaemia among women, which according to Dr Ranjan is a major cause of concern, he said,

In all the states, anaemia is much higher among women compared to men. The challenges like a lack of trained personnel for counselling in peripheral areas, limited family counselling and male engagement continues. While spousal violence has generally declined in most of the states and UTs, it has witnessed an increase in five states including Maharashtra. Also, if we look at the indicators for gender based violence, in Maharashtra there is a sudden increase, which makes it very clear that it has severe consequences for women and it is not only devastating for survivors of violence and their families, but also entails significant social and economic costs. It requires community-based, multi-pronged approach, and sustained engagements. 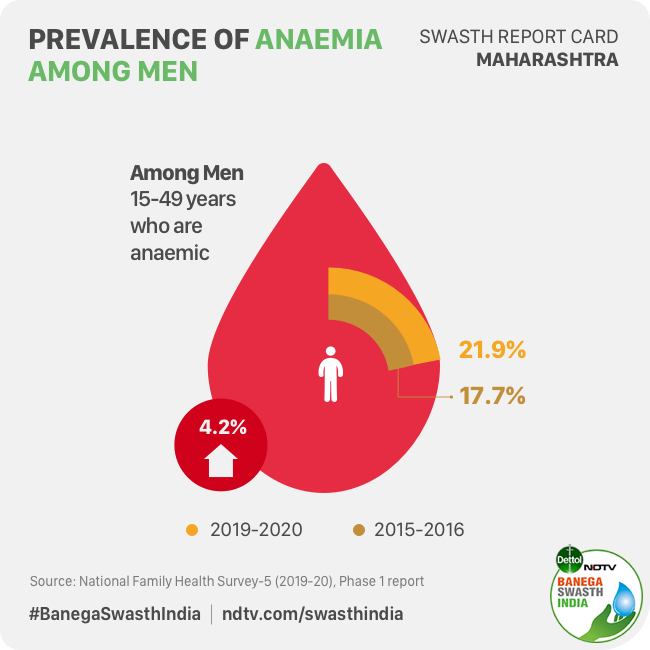 The proportion of anaemic men has also increased in Maharashtra: NFHS-5

The state of Maharashtra has reported significant improvement in menstrual hygiene among women between 15 to 24 years of age in 2019-20, compared to NFHS-4. 84.8 per cent of the women surveyed were using hygienic methods of protection during their menstrual period in 2019-20 whereas, in 2015-16, the number stood at 66.1 per cent. 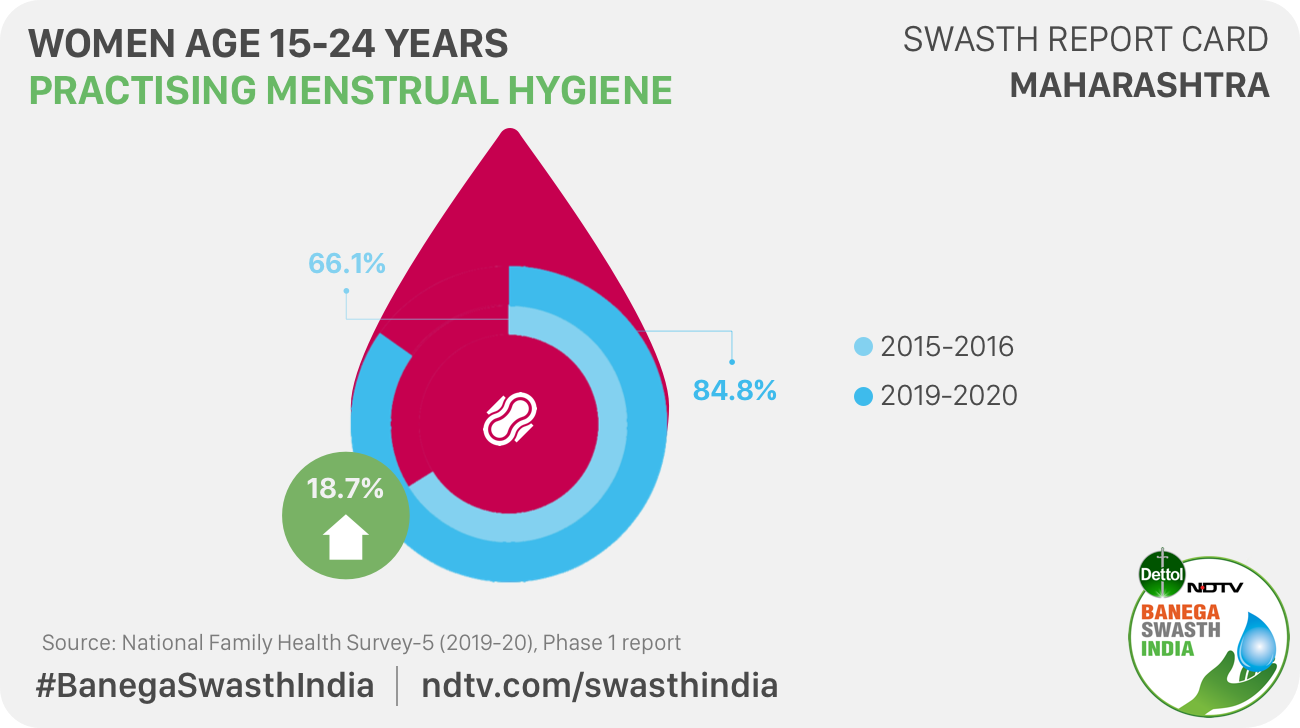 More women in Maharashtra are adopting hygienic method during menstruation

93.5 per cent of the population surveyed in 2019-20 is living in households with an improved drinking-water source. This is an increase of 1 per cent from NFHS-4 conducted in 2015-16. According to the Union Health Ministry, the sources of drinking water include piped water in the residence or piped to the neighbour, public taps, tube-wells, dug-wells, rainwater, tanker truck, cart with small tank, bottled water, and community RO plant, among others. 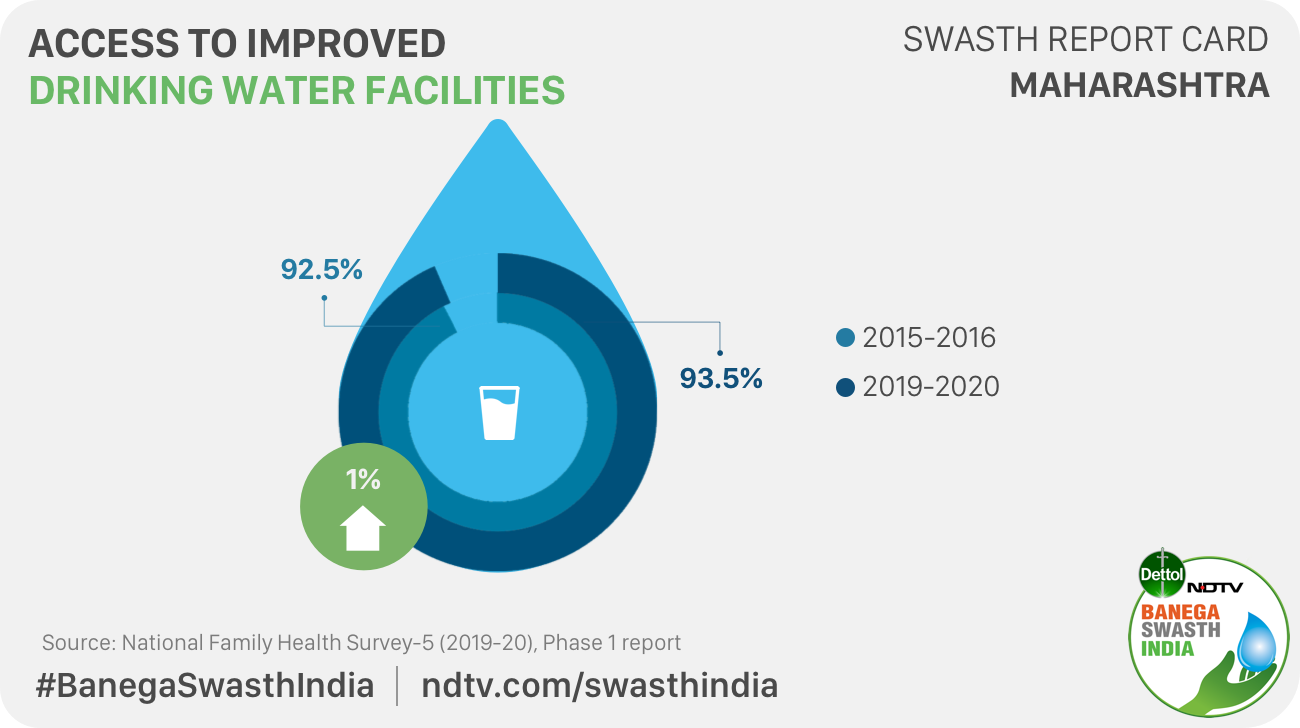 Access to improved drinking water and sanitation facilities has increased in the state, as per NFHS-5

Similarly, the percentage of people living in households that use an improved sanitation facility has moved up from 52.3 per cent in 2015-16 to 72 per cent now. Around 20 per cent increase doesn’t denote access to a toilet facility. In fact, it indicates access to flush to piped sewer system, flush to septic tank, flush to pit latrine, twin pit toilet, which is not shared with any other household. 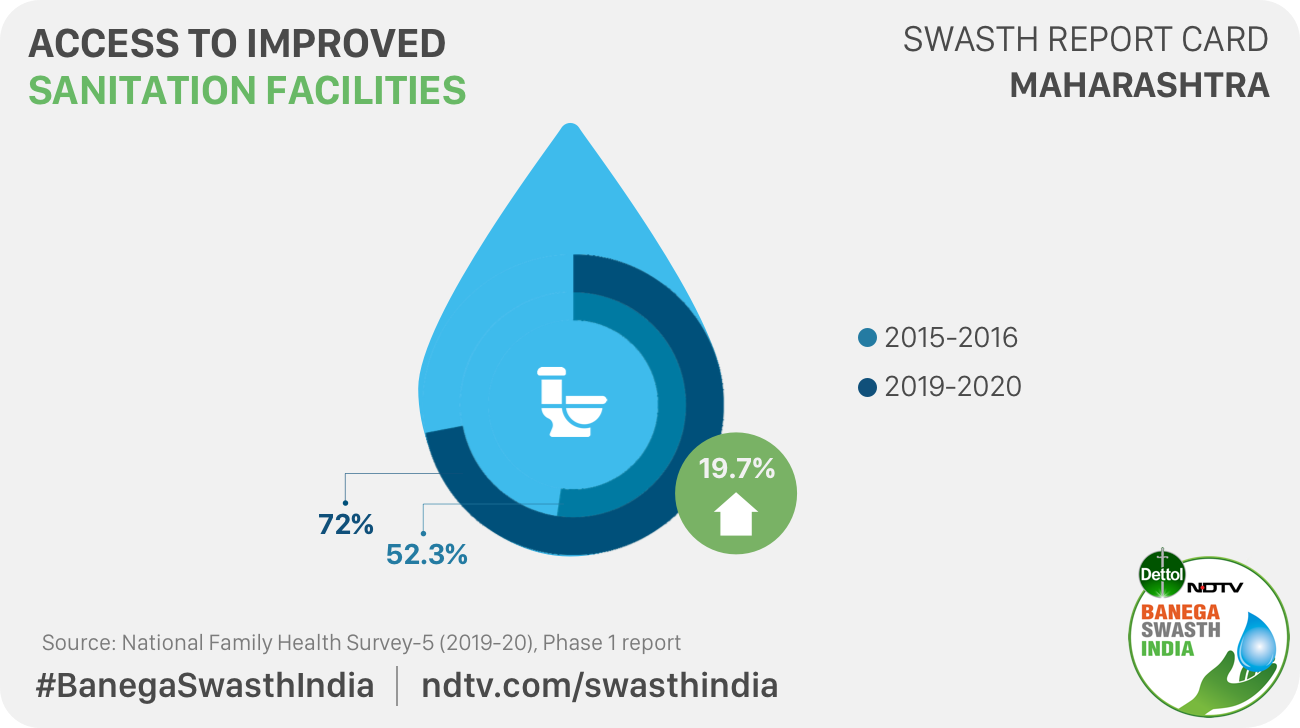 More people in Maharashtra have access to improved sanitation facility

Exclusive: Serum Institute’s Adar Poonawalla Explains How Vaccines Are Being Manufactured From The Facility