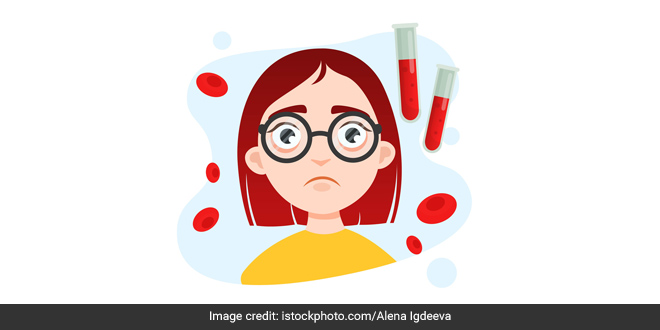 New Delhi: Until a few months ago, Abhishek, a student of Class 12 and resident of Barwala, Hisar, Haryana, was suffering from acute anaemia with Haemoglobin (Hb) levels as low as 9.0 gm/dl, as opposed to the ideal Hb of minimum 13.8 gm/dl. However, now, he has Hb 12.0 gm/dl and is a peer educator, guiding his friends regarding the ideal diet for a healthy body and mind. Talking about how his Hb levels improved and what motivated him to guide others, Abhishek said, “A blood test was conducted at our school and there I was found to be anaemic. Following this, ASHA (Accredited Social Health Activist) workers started giving me medicines every Wednesday and even counselled me on the role of a wholesome diet. Due to the Coronavirus pandemic and lockdown, our schools were closed but ASHA workers would come home and ensure I take medicines regularly. The improvement in my health motivated me to guide my friends.” 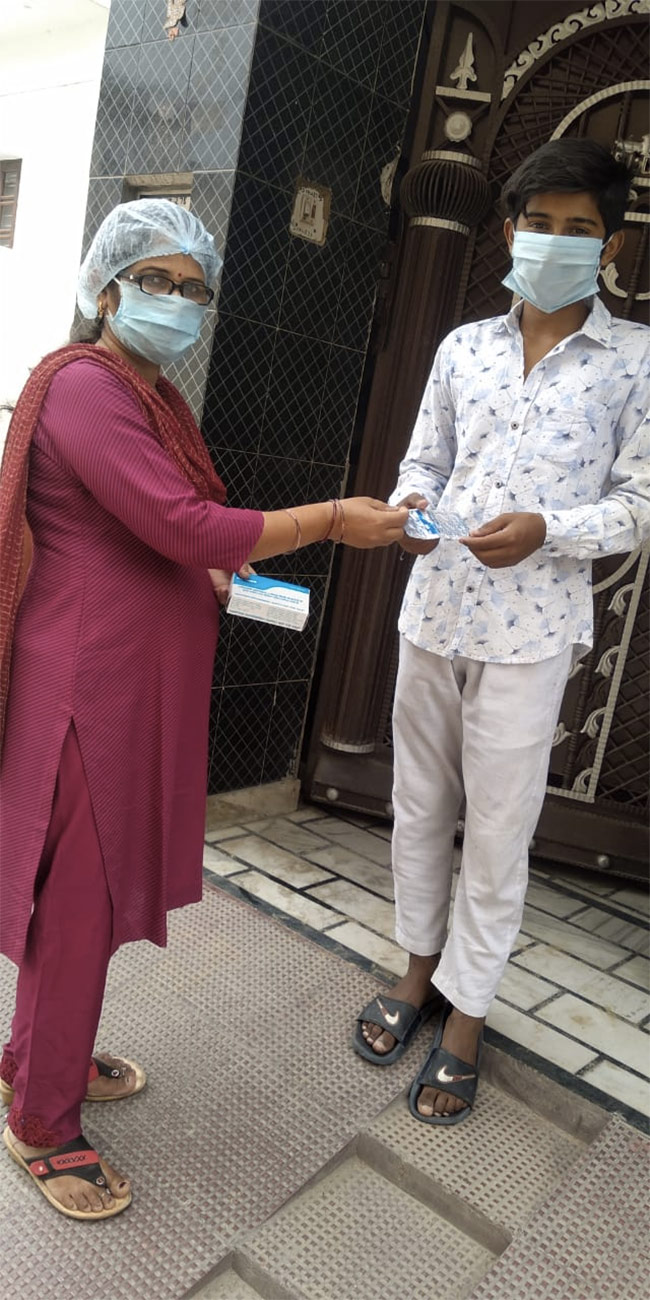 According to Abhishek’s mother Suman, Abhishek used to be a weak and lazy child but now he actively participates in all kinds of activities. Abhishek was provided medication and guidance under the Government of India’s Anemia Mukt Bharat (AMB) campaign launched in 2018 to tackle anaemia. AMB is a part of the government’s flagship POSHAN Abhiyaan that aims to reduce stunting, under-nutrition, anemia (among young children, women and adolescent girls) and reduce low birth weight by 2 per cent, 2 per cent, 3 per cent and 2 per cent per annum respectively.

The six age groups or beneficiaries are: children (6-59 months) who are given IFA (iron and folic acid) syrup; children between 5-9 years of age are provided IFA pink tablets; adolescents boys and girls (10-19 years) get IFA blue; women of reproductive get IFA red; pregnant women and lactating women are also given IFA red.

ASHA workers provide 1 ml iron syrup to infants and toddlers twice a week. Targeted beneficiaries under the age group of 6-59 months are 24.33 lakhs. IFA pink is a new component and in the final stage of procurement. It will be provided to 7.75 lakh students of class 1 to 5 of government schools and will be extended to over 59,000 students of private schools of Panchkula and Yamunanagar districts on a pilot basis. Among other groups, IFA tablets or injectable Iron sucrose is given depending on the level of anaemia.

In an attempt to eradicate anaemia, the state government has been taking various steps apart from distributing IFA tablets and creating awareness. Elaborating on a few of them, Mr Arora said,

We organised Test-Treat-Talk (T3) anaemia camp wherein the emphasis is given on behaviour change and beneficiaries are counseled on lifestyle measures to increase iron levels in the body, and adopt foods rich in iron, protein and other essential nutrients. We also organised ‘Training of Trainers’ (TOT) and five to six participants from each district were trained as master trainers for respective districts for further dissemination of training to all level service providers.

According to the state government, the impact of its efforts reflects in monthly and quarterly scorecards issued by the Government of India. In the latest scorecard of August 2020, Haryana got an average AMB Index of 45.2 and secured top position among states. Talking about the scorecard, Mr Arora said,

Talking about what this score means and how to comprehend it, Mr Arora said,

The score has been categorised into four colours – Red, Blue, Yellow and Green – based on the average AMB index. The score between 0-24.9 comes under red; 25-49.9 denotes blue; 50-74.9 states yellow and 75-100 AMB index is coded with green. Government of India has not mentioned any ideal score per se but above 75 is considered a good score.

Also Read: This NGO Is Aiming To Eradicate Anaemia Among Adolescent Girls In A Gurgaon Community

Though the state has managed to attain the top position in the recent past, there is still a long way to go and challenges to overcome. According to Mr Arora, the three main roadblocks in the state’s fight against anaemia are – dietary habits, patrilineal society and poor health seeking behavior. Sharing his take on the hurdles, Mr Arora said,

In rural India, usually people have their food with milk and curd which are a very poor source of iron. In addition to this, there is low consumption of green vegetables and pulses and a downward trend in the use of millets (Bajra, Jawar, Gram) as a staple diet. These days, people prefer cereals like rice and wheat which are again not rich in iron. Secondly, Haryana is predominantly a patrilineal society where females are dedicated to their family and fulfill the nutritional needs of male members first and this is reflected in their nutritional status. When anaemic woman conceives, her status of anaemia worsens leading to a birth of anemic newborn who grows up to anaemic adolescent. This leads to an intergenerational cycle of anaemia.

Mr Arora also said that anaemia unless severe is not considered a serious health issue because the symptoms are not apparent. Also, poor health seeking behavior fails to pull patients to healthcare facilities for a regular check-up of Hb levels. But now, under T3, digital hemoglobinometers have been procured which make the testing available even at ANM (Auxiliary nurse midwife) level.

To ensure the efforts made so far were not hampered by the Coronavirus pandemic and nationwide lockdown, Haryana government made sure beneficiaries especially school children have a supply of IFA tablets. The state took the help of ASHA workers to deliver the medicines at home and a strip of 10 tablets which could suffice for 10 weeks was provided to adolescents. 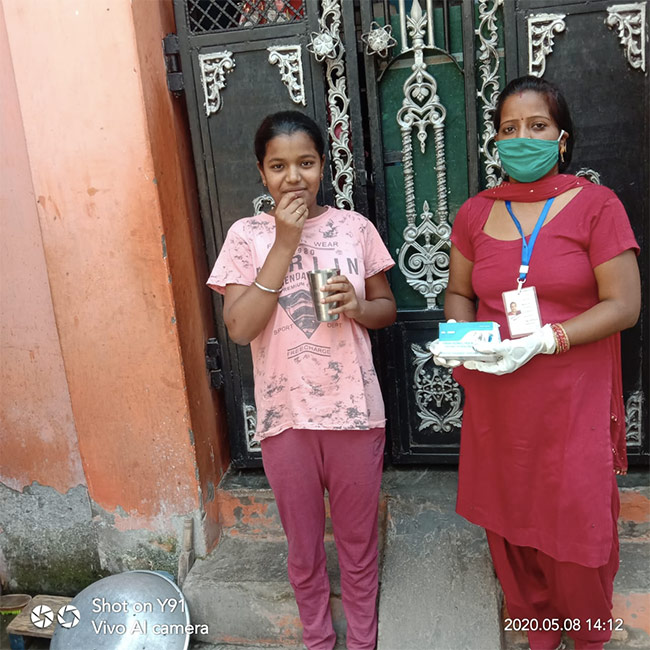 ASHA workers ensured supply of medicine during the Coronavirus pandemic

While signing off, Mr Arora said,

COVID-19 pandemic had disrupted the health system as a whole and affected all programs including anaemia. Most of the resources were diverted towards COVID-19 management, ANMs and ASHAs were involved in surveys and our Rashtriya Bal Swasthya Karyakram (RBSK) teams are deployed in COVID-19 duty and in medical mobile units. But we managed.

Related Topics:
Anaemia Haryana
Up Next

As The Prospects Of COVID-19 Vaccines Get Closer To Reality, Is India Equipped To Import, Distribute, Administer Millions Of Doses?