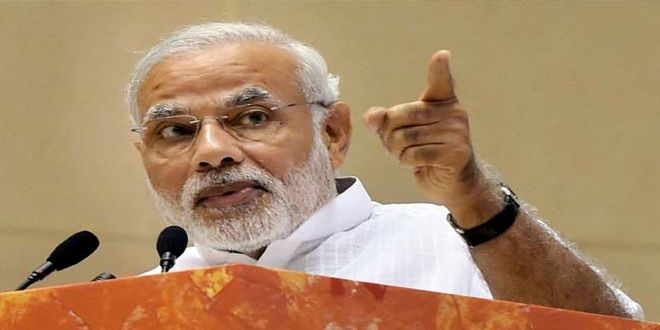 New Delhi: On the 40th edition of Mann Ki Baat, Prime Minister Narendra Modi’s monthly radio programme, the residents of Akola, Maharashtra were praised by the Prime Minister for coming forward and helping the administration clean a 4-kilometre stretch of the polluted Morna river. The issue was highlighted after the Prime Minister was ‘magnetically attracted’ to a photo of a grandfather-grandson duo cleaning the river.

“My dear countrymen, Shri Mangesh from Maharashtra had shared a touching photo on the Narendra Modi Mobile App. The photo caught my attention. In that photo a child is seen participating in ‘Clean Morna River’ campaign with his grandfather. I came to know that the citizens of Akola had organised a cleanliness campaign to clean the Morna river under the Swachh Bharat Abhiyan”. he said.

Mission Clean Morna River is a wonderful initiative, where people came together to clean the river: PM @narendramodi #MannKiBaat

Mangesh from Maharashtra shared a touching photograph on the NM Mobile App, of an elderly person and a young child taking part in the movement to clean the Morna river. pic.twitter.com/KP2hR9CjFK

Like many rivers of India including Ganga and Yamuna, the Morna river was also getting contaminated due to rampant dumping of garbage by the residents and municipal corporation. The scale of the damage to the river was so widespread that a perennial river that would flow all the year round was reduced to a seasonal one, apart from being covered with wild grass and hyacinth. In a bid to rejuvenate Akola’s historical river, a citizen-oriented mission was launched earlier this month under the leadership of Astik Kumar Pandey, Collector, Akola district.

Talking to NDTV, Mr Pandey said, “Morna river is our city’s pride and to prevent it from getting polluted we have been spending a lot of money every year with no tangible results, thanks to the irrational dumping. The only way to stop people from discarding waste is by making them accountable for its cleanliness. If I’m investing my time and energy to clean the river, I will definitely not dump any waste again. With this very strategy we initiated the campaign.”

From women, children, elderly to NGOs, people from every strata of the society came out in large numbers on January 13 to participate in the cleanliness movement. More than 6,000 residents gathered on two sides of the river and within 5-6 hours over 2,000 kilos of garbage were cleared from 14 locations spread over an area of four kilometres. The campaign will be carried out every Saturday until the entire river gets cleaned.

On learning about the massive participation by the people, Prime Minister Modi said,

This noble and grand task named ‘Mission Clean Morna’, involved more than six thousand residents of Akola, more than 100 NGOs, Colleges, Students, children, the elderly, mothers, sisters, almost everybody participated in this task. This mission shows that if a person is determined to do something, then nothing is impossible. Huge social reforms can be brought about through mass movements. I congratulate the people of Akola, the district and the municipal corporation’s administration, all the citizens who were associated with this mass movement. This movement will be an inspiration to our fellow citizens.

More the participation, more the success!
Watch what happens when more than 6000 citizens, 100+ NGOs from Akola decide to clean River Morna.
Inspiring story of Mission Clean Morna in #MaanKiBaat !
Thank you @narendramodi ji for starting the @swachhbharat movement !@SwachhMaha pic.twitter.com/kOHcY5ik6U

The Morna river passes from the main city area and is eight kilometres long. While the residents have cleaned half of the river, the other half will be revived in the coming months. To ensure that people do not dirty the river stretch again, the administration is constructing a fence-like protection on the bridge.

“Most of the garbage gets thrown from the bridge constructed right above the river. The process of building a fence on the bridge has been initiated. As for the people living on the banks of the river, we are regularly warning them about the consequences they will have to face if they throw their garbage in the river,” adds Mr Pandey.

Also Read: You May End Up Paying A Hefty Amount If You Spit, Defecate, Or Litter In Public Places In Maharashtra

47 Million Children In India Reside In Most Polluted Areas: Report