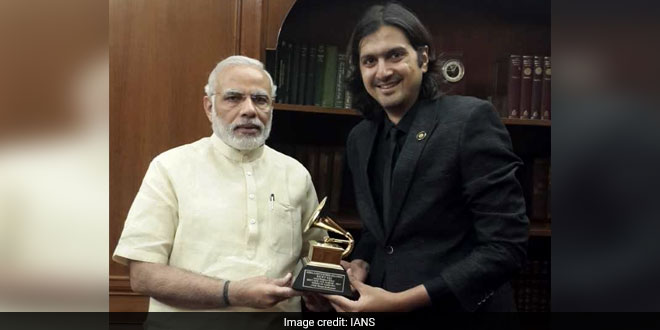 Bengaluru: A chance meeting with Prime Minister Narendra Modi in September 2015 in New Delhi inspired Bengaluru-based Grammy Award winner Ricky Kej to dedicate his life and music to the cause of environment. Since then, Mr. Kej, who has represented India on global fora, performing at venues including the United Nations General Assembly in New York and UN Headquarters in Geneva, has been using music to flag ecological issues to policymakers and public the world over. Mr. Kej told IANS in an interview,

From songs like “Ganga” – depicting the plight of the river considered holy by most Indians – to his Grammy-winning album “Winds of Samara” – which speaks of peace and global harmony – his music connects with all – from world leaders to the man on the street.

With the aid of compelling visuals, Mr. Kej’s music, and collaborations with global music artists, highlights the deleterious consequences of urbanisation, climate change and human-animal conflict.

There are so many issues in India like child labour, gender inequality and poverty, which none seem to be reflecting through music. We see that music has lost the identity of being an art form and has become a profession.

Mr. Kej, 37, bagged Grammy in 2015 for the ‘Best New Age Album’ for “Winds of Samsara”, created along with South African flautist Wouter Kellerman. He is also recognised as the ‘United Nations Global Humanitarian Artist’ for his music with environmental consciousness.

The subjects of Mr. Kej’s music include, the rising air pollution in global cities and towns, the perils being posed to wildlife due to urbanisation and the story of Republic of Kiribati, an island nation in the central Pacific Ocean off Fiji, whose coasts are receding each year due to rising ocean levels due to global warming, among others.

With 15 studio albums released internationally, 3,500 commercials, three feature films in Kannada and over 100 music awards in 20 countries to his credit, the conservationist-musician’s album “Shanti Samsara” was released by Modi and then French President Francois Hollande at the United Nations Conference of Parties (CoP-21) Climate Change Conference in Paris, held from November 30-December 12, 2015.

The album, conceived after his meeting with PM Modi, had Mr. Kej collaborate with about 500 musicians from 40 countries, for songs like “Ganga”, throwing light on the pollution plaguing the river, and on “Earth and Water”. Mr. Kej asserted,

Politicians and policymakers are used to statistics and numbers, but when one approaches them through art, it makes a lot of difference. I have seen politicians change their perspectives towards environmental causes after attending my concerts.

The element of environment and nature in his work comes from his own experiences. For instance, he composed the song “One With Earth” – which highlights natural farming and the need to give up chemical fertilisers – after he lived with the tribals in Andhra Pradesh’s Araku Valley to understand their lifestyle and traditional farming techniques.

Born in 1981 in North Carolina in the US, Mr. Kej moved to Bengaluru with family when he was eight, with intense love for music and nature. Mr. Kej, who was part of a rock band “Angel Dust” during his class 12th from Bishop Cotton Boys’ School in Bengaluru, said,

As a child, I felt music and nature were connected and found music in the sounds of nature, birds and animals. I used to look at music as a way of understanding history, cultures and emotions from different parts of the world. A lot of my education was through music.

Even as Mr. Kej pursued a dental science course on his father’s advice, he continued to create music and decided to pursue it full-time on completing the degree. Mr. Kej recalled,

Like most musicians, I started my career with popular music and later turned to heavy metal and jazz. I finally zeroed in on world music as it connects with the people the world over, irrespective of the language they speak.

As a professor at the National Institute of Advanced Studies (NIAS) in the renowned Indian Institute of Science (IISc) campus in this tech hub, the musician believes his job is to approach environmental subjects artistically. Mr. Kej added,

Numbers don’t hit people as hard as visuals and art can. My job as a musician is to drive the numbers and data through emotions.