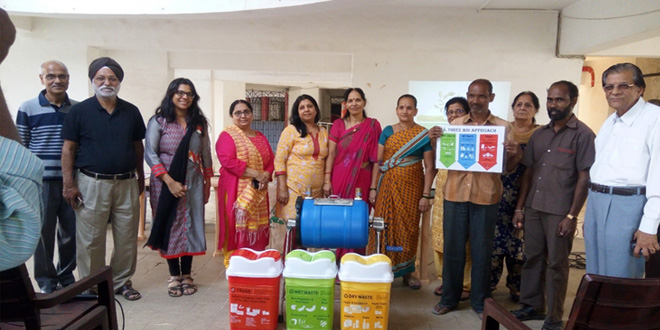 Mumbai: In 2013, a year before Swachh Bharat Abhiyan was launched, a few homemakers in Mumbai’s Malhar co-operative housing society came across the concept of in-house composting or treating kitchen waste at home. Out of curiosity, the group decided to experiment with composting garbage and eventually got hooked to it. As the word got around the society, more women joined in. Cut to 2017, the year Prime Minister Narendra Modi, during his Mann Ki Baat, announced the mandate of waste segregation in 4,000 cities under the Clean India Mission, the members of the society were inspired to adopt composting on a bigger scale.

Also Read: Waste To Wonder: All About Delhi’s New Theme Park ‘Seven Wonders Of The World’

Initially only, a few residents were practising composting, but after the waste segregation mandate, we managed to convince the entire society to give their wet waste separately to produce manure through composting, J B Sharma, Secretary of Malhar tells NDTV.

Now, with an experience in composting and the new guideline of waste segregation which made them realise that composting can be done at society level, the residents started to look for organisations that would provide them with effective solutions.

Once we were aware about the practice of on-site composting, we started attending waste management exhibitions and workshops conducted around the city. We had only three criteria – should be cost effective, hygienic and should reduce carbon footing. Finally, towards the end of 2017 we zeroed on a composting unit shaped like a tumbler.

They collaborated with waste management experts RUR Greenlife (Are You Reducing Reusing Recycling). The city-based company provided two composting units, each with a capacity of treating 300 kilos of waste to the society. Last year on Republic Day (January 26), the aerobic units were launched. The aerobic (a process that uses oxygen and bacteria to decompose waste) bio-composters are zero-energy consumption composters, replicating the natural process of composting. The housekeeping staff of the society was given training on the waste management process by experts from RUR Greenlife. 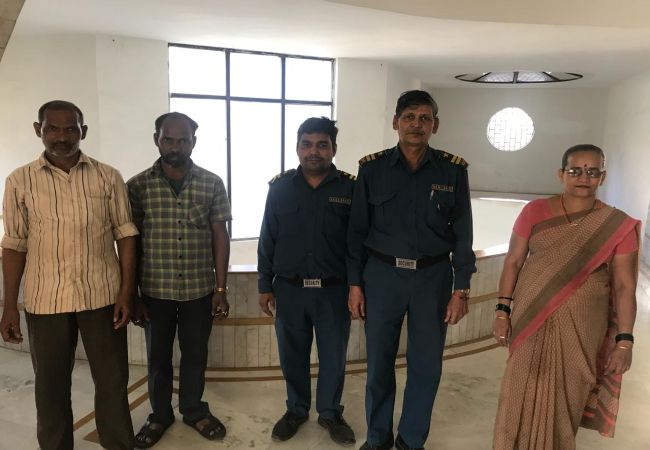 The unit is sustainable as it does not use electricity. It is also free of any chemical additives, thus the compost generated is organic. The waste management system not only transforms waste to resource but also helps combat global warming and climate change. By saving on fuel used for transporting waste to the landfills and electricity it helps in reducing carbon footprints.

The society, which is located in Goregaon East, has 76 flats that generate around 35 kilos per day. The residents segregate the wet garbage from the dry waste. The housekeeping staff then deposits 15-20 kilos of waste along with dry ingredients like leaves and sawdust.

Also Read: A Government School Teacher In Sikkim Is Sponsoring Education Of Children By Generating Revenue From Waste

Wet garbage is deposited in the tembler 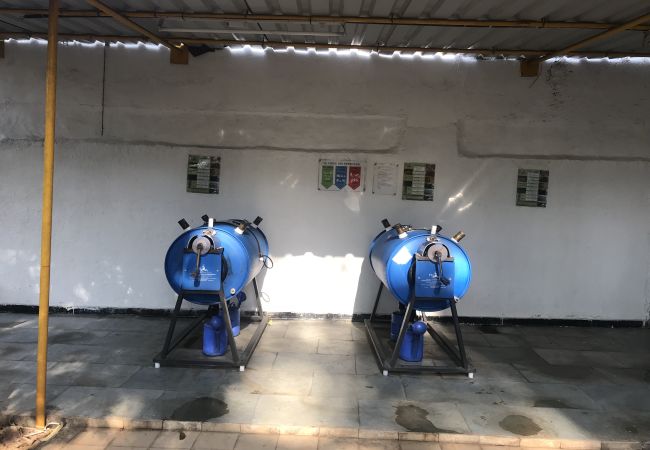 With the help of gears, the tumbler is rotated ten time in a day

For 10 days, it also allowed to settle, and the manure gets ready. Meanwhile, the second tumbler also goes through the same process simultaneously. 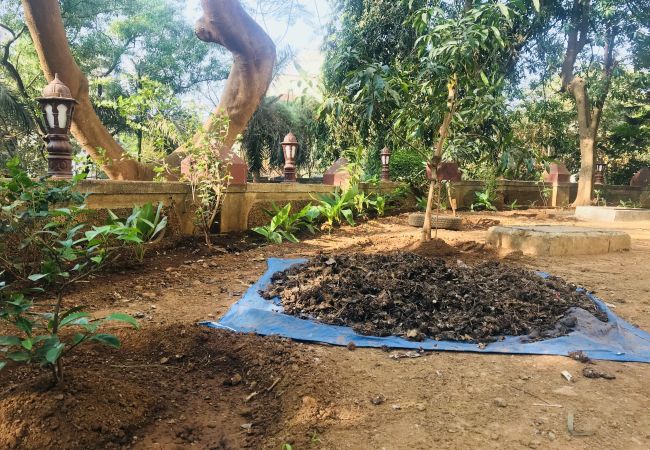 The compost is allowed to settle for a few days

The tumbler produces two types of manure – liquid and solid. The liquid manure is used in the newly developed fruit and vegetable garden. Whereas the solid manure is packed and sold to the residents. The compost is very rich in nutrient, the residents claim.

The very first manure that the tumbler generated was sent to Indian Institute of Soil and Water Conservation laboratory in Dehradun for testing. It showed highly satisfying results, Mr Sharma says.

It has been over a year since the project began and so far, the residents have converted 3.5 tonnes of wet garbage into approximately 400 kilos of manure. According to the RUR Greenlife, the society has mitigated more than 70 kilos of carbon dioxide generated due to transport of waste from source to Deonar landfills.

We are extremely happy to see the organic fruits and vegetables growing in our own complex utilising the compost that we generate in house. I am overwhelmed to see the magic of nature at Malhar, says H B Singh, one of the residents.

Besides, working towards handling the wet garbage, the society is also championing the cause of recycling dry waste. It has placed seven different bins to recycle seven types of dry waste including e-waste, paper, hard plastic, soft plastic, metal, glass and tetra pack cartons. Every month close to 70 kilos of dry waste is sold to local recycler for revenue generation. The money earned from selling the waste and compost is given to the housekeeping staff for rendering their services in waste segregation. 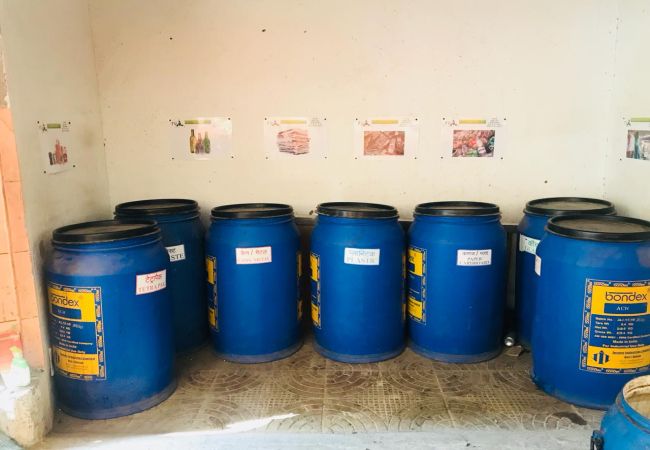 Every month close to 70 kilos of dry waste is sold to local recycler for revenue generation.

Mr Sharma, who gave a tour of their waste management model to NDTV team, is excited to show us a bench that was recently installed. Proudly he boasts that the bench was made by recycling 10,000 tetra pack cartons that were discarded by the residents in the last one year. The bench was installed under the ‘Go Green with Tetra Pak Recycling’ programme initiated by the RUR Greenlife in collaboration with Tetra Pak India. 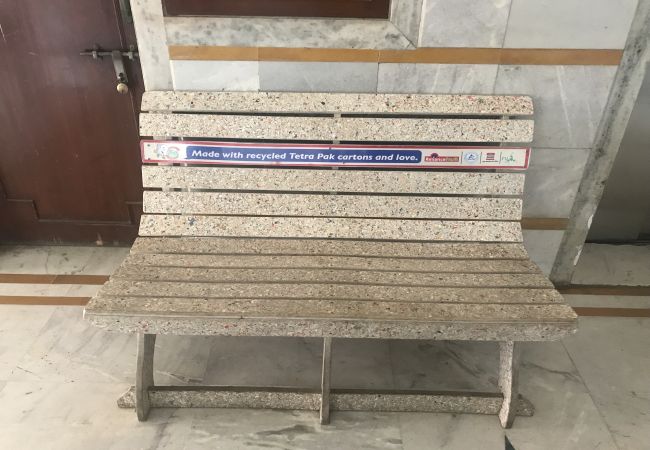 10,000 tetra pack cartons that were used to make the bench

Through this project, the residents are not only following the norms under Solid Waste Management Rule, 2016 but also spreading awareness on waste management. Children from the building and residents of nearby buildings are often given a tour of the society giving them lessons on composting.

Also Read: ODF Mumbai, A Reality Check: Tackling Problems Of Space, Population And Behavior Change, Here’s How The City Is Ensuring Toilet For All