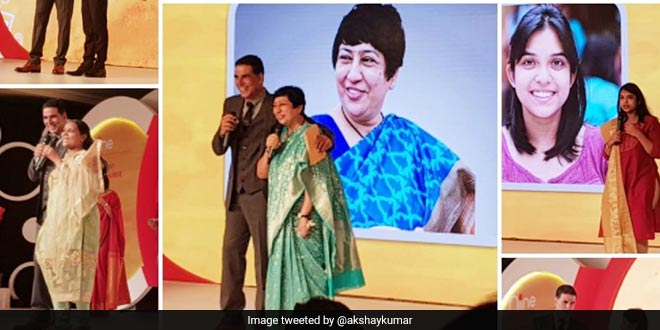 New Delhi: “Boys and men need to be made aware so that the stigma surrounding menstruation can be eliminated. We need to teach young boys to behave first. The way they behave is also the reason why girls drop out from schools,” says India’s reel life PadMan Akshay Kumar. The actor was part of the Menstrual Awareness Conclave held in the capital on May 28 – Menstrual Hygiene Day and to officially launch his new campaign on Menstrual Hygiene – #18to82 with an aim to bridge the gap between sanitary napkin users from 18 per cent to 82 per cent in India.

The 50-year-old actor also added, “Many people in our country still have the veil on their eyes and mindsets that need lifting. I hope the taboo breaks forever one day and India is free from it”.

Sharing the glimpses of the event with netizens on his social media, the actor said that menstrual hygiene is every woman’s need and right.

Menstrual Hygiene is every woman's need and right. Very inspiring to meet these 9 Pad Heroes who have been diligently working towards bridging the menstrual hygiene gap from #18to82 at @NiineMovement Menstrual Hygiene Conclave yesterday. #NotAllHeroesWearCapes pic.twitter.com/p23rYv0ibt

Veteran actor-activist Shabana Azmi was also part of the event and said there is still a long way to go in achieving higher standards of menstrual awareness in India.

Men also need to be included in initiating more dialogue about periods. The glass is half full and half empty… It is not possible that we take this initiative forward unless we involve men.

Shabana Azmi also stressed the need to bring the change in the mindset of people in order to get rid of the taboo associated with menstruation. “We need to encourage workshops in schools and village so that women and girls where they are taught exercises to help them cope with the period pain and keep them fit,” she added.

The actors were joined by BJP MP Meenakshi Lekhi who talked about Goods and Services tax on sanitary napkins. She stressed on the fact that those who can pay 12 per cent Goods and Services Tax (GST) on sanitary pads can actually help those who need them the most. “Pay the taxes so that the money can be utilised for the ones who need the most. Women sitting in this hall are the ones who can afford to pay 12 or 18 percent GST, Mrs Lekhi added.

Now the issue is one who cannot pay. For them, we are producing low-cost organic pads and very good hygienic management products. Such kinds of initiatives which are decentralised are active all across the country. They are run by self-help groups of women, they are tax-free because they are using the local raw material, their production is not so high and they deal with the issues locally and in scientific format.

The #18to82 campaign is a part of the Niine Movement that has been conceived by social entrepreneur Amar Tulsiyan with a hope to empower women, raise awareness about menstrual hygiene and tackle the taboos associated with menstruation in the country.