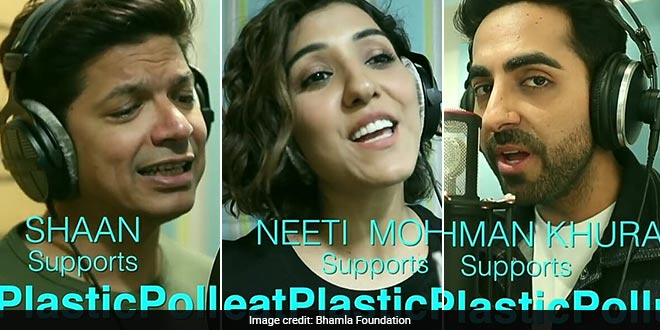 New Delhi: ‘Tik Tik! we all take the oath to beat plastic pollution,’ with this as their motto, singer Shankar Mahadevan, Sunidhi Chauhan, Shaan along with Actor-singer Ayushmann Khurrana show their support for #BeatPlasticPollution campaign through a song ahead of 45th World Environment Day celebrations. The song titled “Tik Tak Plastic” in collaboration with United Nations was released recently to raise awareness on how plastic pollution is plaguing India.

Polybags, bottles, straws – these things are scattered everywhere on our planet. It cannot stop, not it can get reduced. It stays on our planet and produces toxic – we cannot get rid of plastics. But, there is a simple option – we all can say no to the use of single-use plastics, read the lyrics of the song.

“This is a song that will make you do something about it!”

All of us need to do our bit to leave behind a safe and environmentally healthy planet for our children and future generations. The world that we live in has seen extensive damage to the ecosystem by the use of plastics. We have to reverse the negative impact of plastic pollution by actively speaking about it and raising our voice to bring awareness. It is our duty to do so.

This is not the only song which has been released ahead of World Environment Day to spread the message of plastic pollution, recently Singer Shree D also launched a song after getting inspired from Environmentalist Afroz Shah and his efforts to clean-up Versova Beach.

Hitting Environmental Pollution Out Of The Park: BCCI Joins Hands With United Nations, Commits To Green Cricket In India