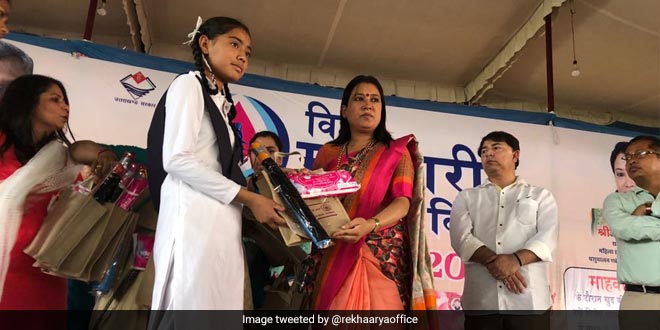 New Delhi: India is witnessing a gradual revolution in the field of menstrual hygiene, as what was once a taboo topic discussed behind closed doors and whispers is being spoken about more openly. Be it the release of the Bollywood feature film Padman or government representatives regularly speaking on the importance of menstrual hygiene, menstruation is gradually becoming a common topic of discussion. On the occasion of Menstrual Hygiene Day on May 28, the state government of Uttarakhand announced that to promote menstrual hygiene among young girls and women, especially in rural areas, Anganwadi centres in the districts of Dehradun, Pauri, Pithoragarh and Almora will sell low-cost sanitary napkins on the fifth of every month. The move is a part of the state’s Sanitary Napkin Scheme.

Awareness on menstrual hygiene in rural Uttarakhand has been on the lower side, with the National Family Health Survey 4 stating that 55 per cent of women between the age of 15 and 24 in Uttarakhand have no access to sanitary napkins, forcing them to use cloth or other unhygienic methods which can lead to a variety of reproductive diseases and other health concerns. Uttarakhand had drawn up plans to introduce the Sanitary Napkin Scheme in 2016 and it was on the occasion of Menstrual Hygiene Day on Monday, that the scheme was finally launched. Rekha Arya, Women and Child Welfare Minister of Uttarakhand launched the scheme by distributing free sanitary kits to over 10,000 girls and women in Dehradun.

The Women and Child Welfare Minister said the importance of Menstrual Hygiene Day lied in spreading awareness among young girls about the necessity of using sanitary napkins. She also said that menstrual hygiene was a topic that needed to be discussed about more openly, especially in rural areas where menstruation was considered a topic of taboo.

The sanitary napkin pads available at Anganwadi centres will come at a cost of Rs. 15 for 8 pads. For successfully selling a pack of sanitary napkins, each Anganwadi worker will be provided with an incentive of Rs. 2 per pack, which will be directly credited to her bank account. The scheme aims to not only encourage more girls and women to use sanitary napkins, but also empower Anganwadi workers financially by ensuring that they motivate women to buy the low-cost sanitary napkins. Though the scheme has been initiated in only four districts, the state plans to cover the rest of the eight districts by the end of this year, the Minister said.

Menstrual hygiene has found due support among a number of celebrities, NGOs and both state and central government representatives in the last few years. Menstrual hygiene has also become a key feature of the Swachh Bharat Abhiyan, as along with sanitation and waste management, the campaign has highlighted the need for hygienic menstrual practices and safe disposal of menstrual waste.