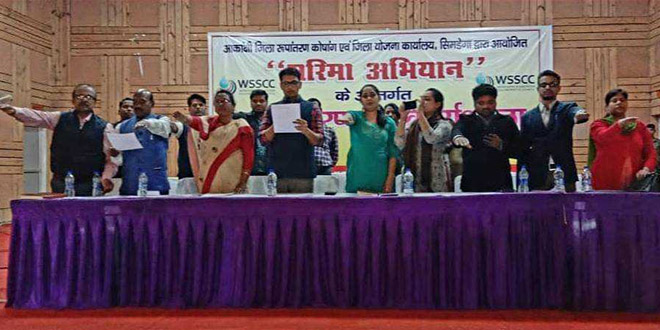 New Delhi: When 22-year-old Parmeela Jha visited the primary healthcare centre in her block, Kersai, Simdega district of Jharkhand, she was surprised to see a poster talking about menstrual hygiene. She read the heading written in bold from her seat but hesitated to go near the poster and read the rest of it. After a while, she couldn’t hold her curiosity and approached the poster and immediately sensed the glare of people around her. It is precisely this attitude that ‘Garima Fauj’, a group of 450 volunteers from multiple departments i.e. health, education, social welfare, and NGOs (Non-Government Organisations) like Pratham Foundation, aims to tackle under the menstrual hygiene management awareness campaign ‘Garima Abhiyan’, launched by the district administration of the Simdega district of Jharkhandunder Transformation of Aspirational Districts Program (TADP) of NITI (National Institution for Transforming India) Aayog.

Lack of information has led to many misconceptions and taboos around menstruation. These taboos have created a societal silence regarding this subject. People don’t want to talk about it, families don’t discuss menstruation with their kids and even teachers are silent on this topic. This silence only makes the taboo around menstruation stronger. Thus in order to break this social silence, to raise awareness and to bust myths around menstruation, the district administration launched ‘Garima Abhiyan’ in September 2018. Till now we have covered more than 760 schools and 964 anganwadis, all government offices and 1000 self-help groups across all the 450 villages in the district. On World Menstrual Hygiene Day, I can assure that this campaign will keep running with help of our young and enthusiastic volunteers till the silence on menstruation is completely shattered and the taboos are fully dismissed by everyone in the district.

Mr. Kumar further said that ‘Garima Abhiyan’ aims to sensitise both men and women across all ages on issues related to menstrual health, sanitation, and safe menstrual practices. During interactions with people of Simdega, it was found that while most people knew what menstruation is, they did not know about the menstrual-cycle and health issue related to it. Mr. Kumar said,

Most people think that women just bleed every month and this helps them get pregnant. However, this information comes with various myths like touching certain plants and pickles during menstruation will ruin these, using strong fragrances during this time will attract evil spirits. Not only this, restrictions are imposed on menstruating women on entering the kitchen, place of worship, and participating in socio-cultural activities. This makes menstruation no less than a curse.

The campaign, for which the district administration collaborated with a United Nations agency, Water Sanitation Supportive & Collaborative Council (WSSCC), trained over 3,000 ground workers or ‘Garima Fauj’ including locals for its campaigns. The team of ground workers has been tasked with counseling people on menstrual myths by holding meetings with them and visiting their homes. An outreach has been initiated for through schools, anganwadi centres, health care centres, self-help groups and NGOs as well to target women with the necessary information and medical help.

Shashindra Baraik, Block Development Officer, Simdega informed NDTV that most women in Jharkhand have been using old cloth instead of sanitary pads during menstruation, making them vulnerable to many diseases if the cloth isn’t washed and dried properly. We are trying to make women aware of these issues and aim to help them adopt more hygienic and safe alternatives while also encouraging them to have open communication about on the issue. He said,

Menstrual health and hygiene management are complex issues and need coordinated efforts of all stakeholders. Having a period-centric conversation with both men and women can be used as a tool in efforts in this direction.

As per Mr. Baraik, the women in his block were initially hesitant but gradually came forward to break their silence on menstruation by discussing their period, asking questions and took the pledge the message of menstrual hygiene. Gradually, men have also started participating in campaign activities.

According to the National Family Health Survey (NFHS)- 4, only 58 percent of women in the age group 15-24 use a hygienic method of menstrual protection. In Jharkhand, as per a 2013 report of USAID, about 88 percent of menstruating women are unable to access sanitary napkins. These women use home-grown alternatives like old fabric, rags, sand, ash, wood shavings, newspapers, dried leaves, hay, and even plastic.