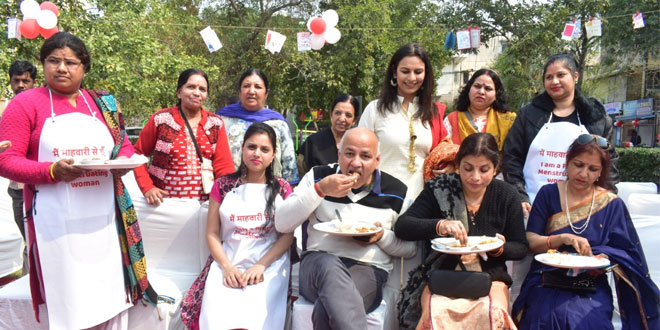 New Delhi: Donning aprons that said “I am a proud menstruating woman” 28 women cooked up a feast to shatter the myths associated with periods. An Initiative Undertaken By Delhi based NGO ‘Sachhi Saheli’ that works towards raising awareness about menstruation, a lunch event called ‘period feast’ was organised in Delhi on Sunday (February 23) in Mayur Vihar area. The event was in response to the controversial remarks by a priest from Gujarat stating that if women cook and serve food during periods then it is a grave offence and they would be born as dogs in their next life. While talking to NDTV about this unique attempt to normalise menstruation among people, Dr. Surbhi Singh, a gynaecologist and founder of ‘Sachhi Saheli’ said,

Several girls and women are subjected to restrictions in their daily lives simply because they are menstruating. The mission of this event is to uphold the dignity of women. It is disgusting to see that even today, in the 21st century, when we boast of becoming a superpower, have already sent machines to the Mars, we have unfortunately not been able to change our mindset. We are still dragging the age-old beliefs, misconceptions and myths along with us. We are still asking our girls to not enter religious places during menstruation, forbid them from cooking, touching food items and try to limit them as much as possible.

Also Read: Save The Date! Delhi’s Menstruating Women Invite You To Have A ‘Period Feast’ On Sunday

According to Dr. Singh, 28 women who were menstruating cooked food which was had by about 300 participants including Deputy Chief Minister of Delhi Manish Sisodia and feminist activist Kamala Bhasin. Ranjana, 33 years, one the women cooking the ‘period feast’ said,

We are here to tell people that we are not ashamed of our bodies. We are proud of the fact that we menstruate and so have the ability to bring a new life in this world. We choose to oppose the declaration made by the priest and don’t care what we become in our next birth. All these restrictions do not hold any importance today. We just need to be hygienic and take care of ourselves.

A street play was also performed to dispel superstitions associated with periods. 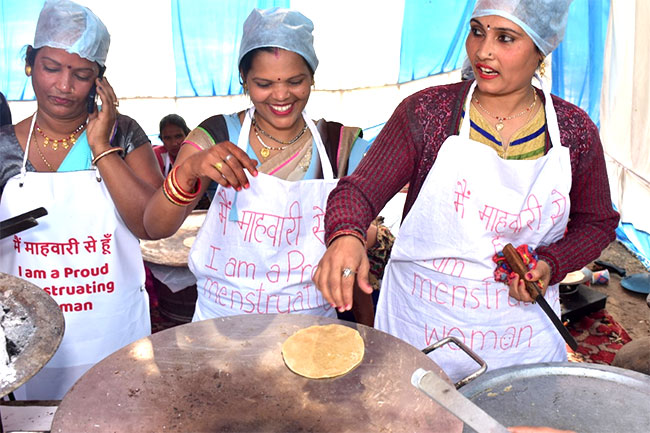 While speaking at the event Mr. Sisodia said that women’s health cannot be compromised due to unscientific claims and myths. He said, “In today’s scientific day and age, there is nothing pure/impure about menstruation, it is a natural biological process that should be taken as it is.”

He further said that it is very important to have a discussion about menstruation so that the hesitation can be removed and more women can be made aware about the various aspects of women’s health and menstruation including the adoption of the safe menstrual hygiene management.

While the women who participated in the event served food to the visitors, volunteers of NGO Sachhi Saheli had a dialogue with the people present in the event about the misconceptions they had about menstruation and what the facts are. Dr. Singh asserted that ‘Sachchi Saheli’ will continue to fight the taboo and break the silence on menstruation. She signed off saying,

No one has the right to take away the pride of any woman just because she is on her periods.

Related Topics:
Delhi Menstrual Hygiene Menstruation In India
Up Next