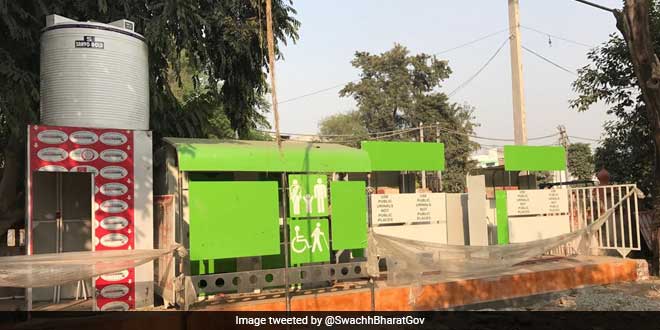 New Delhi: Nearly there, but not quite, is what Mohali in Punjab’s open defecation free (ODF) status is presently. The city, which had set a target of going ODF by October last year, could not achieve its target as it hit an, an unexpected hurdle. Eight markets in the city are without toilets at present, due to which the city is struggling to achieve the much coveted ODF status. The plans to construct 48 public toilets in these eight markets have been cleared by the municipal corporation, but construction is yet to begin. Despite clearance of plans and earmarking a budget of Rs 98 lakh, the municipal corporation has not been able to begin the construction of toilets, due to lack of interest from any organisation to take up construction duties. Not only has this resulted in a lack of sanitation facilities in eight markets in sectors 57, 68 and 70 in Mohali, but has also seen an increase in instances of open defecation in and around these areas. From January 2018 to May 2018, over 60 incidents of open defecation were reported in the areas where public toilets are yet to be constructed.

“The proposal to build the toilets was lying for a long time with the local bodies department, and they took over a year to clear it. Once the proposal was cleared, we have speed fast tracked it to identify the cost required for the construction of the toilets, as well as earmark the spaces for construction. But till now, no organisation has come forward proposing us to take over the construction. We are planning to bring out tenders soon so that construction can begin at the earliest,” said Sandeep Hans, Municipal Commissioner, Municipal Corporation Mohali.

The slow pace of construction of toilets in the eight markets has derailed Mohali’s ODF plans, as though a majority of the city has been declared ODF, eight markets and 68 households in sectors 68 and 70 are yet to get toilets. This has dented Mohali’s toilet construction pace, and cast a doubt on whether the city will be able to achieve the ODF status by October 2018. Recently, the Punjab government announced that it is trying to declare all its cities and villages ODF by June 30, a deadline impossible for Mohali to meet.

We are aware of the government’s decision to self-declare itself as ODF on June 30. I spoke to the Minister of Urban Development Rajinder Singh Bajwa and informed him of the situation. As soon as the tenders are up, we are confident that collaborators are going to come aboard and take over the construction. If construction begins in July, we are confident of completing the project by October, said Mr Hans.

Out of 68 households without toilets, 30 have already been persuaded by the municipal corporation to build toilets. Initially unaware of the policies of the government, the households were explained about the government’s toilet building scheme in detail. Till date, 14,000 toilets have been built in Mohali. Though it has missed its October 2017 deadline to go ODF, Mohali is now locked in a tight race against time to finish remaining toilet constructions before October 2018 and go ODF.

Also Read: By June 30, All Cities And Towns in Punjab To Become ODF, Thanks To The Swachh Motivators

Most People Aware Of Harmful Effects Of Plastics But Still Use It: Study

Maharashtra Plastic Ban: BMC Organises Special Classes In Mumbai On How To Cope With The Plastic Ban