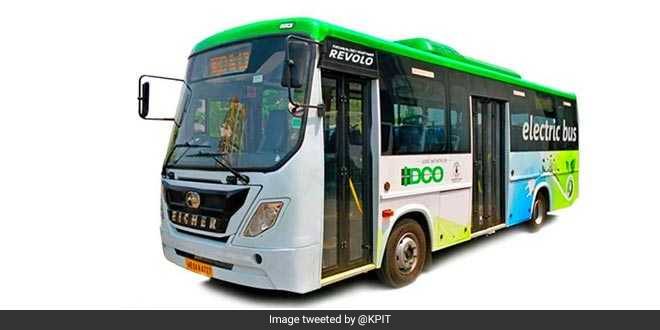 New Delhi: The increasing levels of pollution in Kolkata and surrounding areas made to the headlines many time in the last few years. With 94,534 deaths in 2017, the state of West Bengal, according to a recent study conducted by the Centre of Science and Environment (CSE), has been ranked as the fourth in the country in term of pollution-related deaths after Uttar Pradesh, Maharashtra, and Bihar. This state of the air quality in West Bengal prompted the local governance of New Town Kolkata, a small town located 5 kilometres from Kolkata, to take up ‘greening’ measures to combat the toxic air. New Town Kolkata Development Authority (NTKDA) and West Bengal Housing and Infrastructure Development Corporation (WBHIDCO) deployed three electric buses as a pilot project to encourage people to adopt cleaner alternatives of mobility. Introduced in May 2018, these buses gained popularity among the daily commuters. Plying in the inner lanes of New Town with a total population of 4.02 lakh, the e-buses, have recently completed a combined footfall of one lakh.

When we first deployed electric in New Town, we did not expect such a good response from the daily commuter. We are now thinking about widening the project and bring in more electric buses and also add electric scooters in the city.

Talking about the impact of electric buses on the city, Mr. Sen said,

In terms of curbing pollution, only three e-buses cannot make a difference. But, the state government is planning to increase the deployment of electric vehicles in various cities in the state for green transportation initiative. In the New Town itself, we are planning to ply electric scooters which can be used by the residents on a rental basis.

As per Mr. Sen, it took almost three years of test and trial before these buses were put on the road for public use. He said, “We took about three years to finally put the e-buses on the road because we insisted that these buses be air-conditioned and usually e-buses are not air-conditioned. We had to overcome technical hurdles and other hurdles like getting the safety certificate from Automobile research association of India and getting the buses registered with the transport department.” Manufactured by KPIT (Kirtane and Pandit Information Technologies) the e-buses deployed in New Town as 32 seaters and can travel for about 80 km on one charge. They operate in 2 shifts- from 8 am to 12 noon and 4 pm to 8 pm.

The unique feature of these buses is that these have no conductor on board to hand out tickets to passengers. Instead, the tickets which cost Rs. 10 per person are printed at the gate itself which have hydraulically operated doors that open at the press of a button by the bus driver. Each bus is fitted with two CCTV (Closed-circuit television) cameras as a security feature and all the seats in the bus have seatbelts.

The local authorities of New Town have also put the fast-charging infrastructure in place for the buses at four places. The buses can be charged fully in charge in one and a half hour to two hours. The routes of these buses are formulated in such a way that in one charge itself the buses can run for the whole day as the buses run within the city in a circular fashion and connecting the unconnected parts of the city and acting as the feeder.

The WBHIDCO is also in discussion with some electric two-wheeler manufacturers for collaborating for putting e-scooters in the city and is in conversation with Zoomcar for managing the service. Mr. Sen said, “The e-scooters will be deployed in the town soon. We are still in the planning stage. We plan to station these scooters at all important crossings as well as designated e-scooter stands along various roads in the township. People will be able to avail the service through a mobile application.”

Mr. Sen said that the state government wants to encourage the use of electric vehicles that leave less carbon footprint compared with fossil fuel burning vehicles.

Touted as the first satellite city of India, New Town Kolkata received a gold certification from the Indian Green Building Council (IGBC), a body of Confederation of Indian Industry (CII) in August 2018 for its eco-friendly initiatives. These initiatives include plying electric buses, using LED (Light-emitting diode) lights on roads for saving power, and launching a cycle-hiring system. The city authorities also practice solid waste management and waste segregation. The city also focuses on maintaining green cover and 22 per cent of New Town’s land area of 28 square kilometer, has been used for parks, playgrounds, city green cover and water bodies.

Satellite city is a concept in urban planning that refers to smaller metropolitan areas which are located near to, but are mostly independent of larger metropolitan areas and are planned in a way to reduce the burden on the resources of the larger area. New Town Kolkata began to operate as a district in 2003 to ease the pressure on Kolkata’s existing business towns.

New Town, Kolkata has received a gold certification from the Indian Green Building Council (IGBC). It is the first area in Bengal where air-conditioned electric buses have been introduced, as part of the #SmartCities Mission.#TransformNation pic.twitter.com/QkQbCIfAYp

Mr. Sen said, “The city has been planned out with a focus on sustainability to encourage an eco-friendly lifestyle among its residents and to maintain a balance between urban living and environment.”