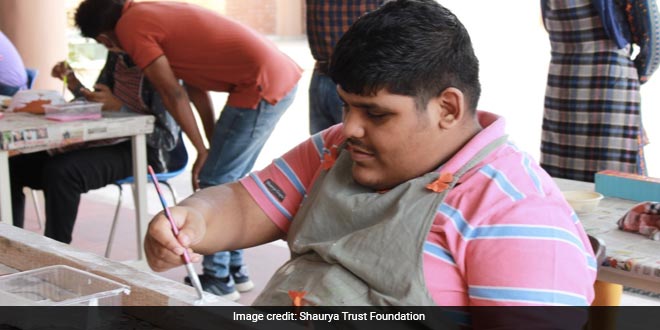 New Delhi: In 2002, Ravi Gupta, Senior Advocate practising at High court and Supreme court, and his wife, Rani Gupta, decided to adopt a son and named him Shaurya. Just when Shaurya was about to turn 2 years old, Mr and Mrs Gupta were told by the doctors that he was autistic. Next 4 years, Mr Gupta worked towards the rehabilitation of his child and faced difficulties due to lack of facilities and awareness in the nation. In 2008, he decided to set up a fund for children like his own, and their well being as well as skill training, to address one key concern – what will happen to his son after him and his wife?

I set up the fund under the guidance of my mentor Mr. Mukul Rohatgi, senior Advocate and Attorney General of India, with a vision, that people and parents like us, can come together and have a common platform to work for the people who are intellactually challenged, Mr Gupta told NDTV.

With this initial thought and initiative, Mr and Mrs Gupta have today set up three skill training campuses for intellectually challenged young adults, where activities involving vocational, social and life skills are taught to them. Today Shaurya Trust Foundation (SFT) is a diverse community that enables each student to be an inspired, lifelong learner and a responsible, compassionate global citizen. While Mr Gupta’s son is almost 20 years old now and doing well, he says Shaurya helped him find his passion for helping special children.

Shaurya is severely autistic – despite all odds is very much on the path to independence and learning self management skills. He is good at cutting and chopping vegetables and is a powerlifter champion. Shaurya is currently working upon packaging of Holi colours, Mr Gupta tells NDTV.

Situated amidst the lush green Western and Eastern Peripheral highway in Palwal, Haryana, the 3,600 square yards, spread over 6 floors, is the Independent Living – Residential Skill Development and Training & Sports Facility for persons with developmental disability set up by the SFT.

Besides this main campus, there is also an outdoor sports facility of about 14,520 square yards. Furthermore, SFT’s skilling centre in the city is situated amidst the heart of Delhi in Maharani Bagh. Talking about his journey, Mr Gupta explains,

We started a centre in Ashram Chawk, Maharani Bagh in Delhi. We first created a trust and then took a premise on rent to start the centre. Initially, it was just a therapy centre. With time, we realised what is needed is a skill program for these children because my objective was to create a platform where they can get skill training so that they can be gainfully employed and placed in society with respect. After about 5 years, we thought of developing a bigger place for them, so that we can give them a social circle as well. That’s how we shifted to Palwal where I had some land. I gifted that land to the trust and we initiated construction of the campus. After completing all formalities and receiving permissions, we set up the campus. We have 2 services – residential centre, 3 acre land for sports and open areas. They aren’t adjacent but just a 5 minutes drive away.

The core belief of the Shaurya Foundation revolves not only towards educating people with intellectual challenges but also preparing them to be self-sufficient for their future venture while strengthening them with life skills, says Mr Gupta. Talking about how they determine the potential of each child, Mr Gupta explains,

It is incredible to witness how an adult with hearing impairment could train and manage a team of IT professionals and a person with learning disabilities works with bakers with Down Syndrome in the baking unit. Individuals with Down Syndrome can communicate, while those with Autism have the innate ability to produce and perform repetitive activities- they turn out to be great bakers and data, entry specialists. Every student is analysed in this manner to understand and assess their strengths and make use of them in the best way possible. They fit together beautifully like a perfect piece of the puzzle, forming a functional environment that could perform a perfect business at the end of the day.

SFT is currently training 32 students and the hostel on the campus has 12 residential students. The SFT is working towards making these services accessible for the families belonging to the economically weaker section also.

Mr Gupta says that the biggest challenge faced by him and his foundation are the parents who don’t accept their children for what they are.

A child who has come to your life as special, don’t be fazed and depressed, and rather accept him or her as it is. The more time you waste in accepting the reality, the more time you lose in rehabilitating the child. I believe in acceptance, he says to the parents of special children.

Ever since the initiation of the skilling centre in 2011, SFT has reached over 200 families of persons with special needs, of all ages. 21-year-old Varun Brij who is autistic, found his potential as a skilled singer and data entry specialist after joining SFT as a student. Similarly, 41-year-old Princy, who has Asperger’s Syndrome and used to have a difficult time relating to others socially due to his condition, is today a skilled baker and a remarkable salesperson at SFT.

Mr Gupta further says that while many would believe that vocational skills for people with special needs are solely for recreation and keeping them busy. However, SFT has been a place where students are inspired to use those skills for a greater good – ‘to represent our community, to lift the reputation of disability, and to join an unencountered symposium of generating employment opportunities for the community as a whole,’ he said.

Able 2.0: How Inclusive Of Persons With Disabilities Is The Union Budget 2022-23