New Delhi: “Hi, I am Nidhi Goyal and I am blind, but so is love, maybe we should get over it”. That’s how Nidhi Goyal, India’s first female disabled stand-up comedian introduces herself to overcome the awkwardness that sets in when she walks on a stage. 36-year-old Goyal started doing comedy in December 2015. Recalling her debut performance which was done on an invitation of two non-governmental organisations and some activists, Ms Goyal said,

I used to share stories of ableism and make people laugh in circles. While doing so, I never thought of narrating my experiences to a larger group of people and being a comedian. So, the first performance was more like a trial we did. But people were so uncomfortable for the first two to three minutes that they forgot that I am a comic. They only kept looking at my disability. At the end of the performance, a woman came up to me and said, I was laughing and falling off my chair but also cringing thinking, ‘Oh my god, I do this to people with disabilities’.

Ms Goyal was around 15-year-old when she was diagnosed with Retinitis Pigmentosa, a progressive degenerative eye disorder that mostly renders one blind. The young Goyal was in Class 10 and the diagnosis had put a question mark on her career choice of being a portrait painter or venture into fine arts and visual space. And the only question that surrounded her was, “What do I do next?”

I wanted to be a painter since I was four but, one day, after 10 years of preparation, I get to know, I can’t achieve it. And then began my struggle with making a career choice. Every day was a surprise like I used to take public transport to college; one day I could cross the street and the second day, I would get saved by a micro-second because I didn’t see a bike speeding towards me. I started to discover what I could and could not see which, at that point, I equated to, what I could and could not do because that’s how an ableist world makes you think. The popular idea is that when you are losing sight, you are losing abilities, but that’s not true, said Ms Goyal.

Ms Goyal is the youngest of three siblings, born and raised in Mumbai. Ms Goyal’s eldest brother suffers from the same disease and had lost his vision completely by the time his sister was diagnosed. Growing up, when a regular teenager would be fascinated by their looks and their dreams, discovering themselves and the world, Ms Goyal, had to spend time unraveling her disability. Explaining her journey post-diagnosis in three steps, she said,

It begins with discovering things like now I can’t see text also. Second, you have to accept the discovery and then find the alternative to perform the job. For example, when I couldn’t write my accounting paper, I had to opt for a scribe.

Also Read: Opinion: Access For Disabled, Many Hurdles To Cross

After completing class 10, she moved to junior college followed by graduation in commerce. Parallely, the disease continued to deteriorate and within four to five years of diagnosis, Ms Goyal completely lost her vision. However, with the support of her family, she continued with her education and attained Master’s degree and did Diploma in Human Resource Management followed by a Post-Graduation in Communication Media. She went to intern with media houses and later worked as a journalist, writer and translator. In 2011, Ms Goyal’s activism journey began and she started voicing for the rights of people with disability.

One thing that followed her through all stages of life was the discrimination because of her blindness. For instance, once an airline denied assisting her during an eight-hour layover. When Ms Goyal decided to go to a café and grab a cup of coffee on her own or use a washroom, her passport was taken away.

In college, there were men who were not allowed to talk to women and bring women home but I was always an exception for them. Where is this confidence coming from? Because I am not a ‘girl’, I am a ‘disabled girl’. Similarly, once during a group project, I wrote a script and decided to be a narrator while other members got various roles because they could practice over the weekend and I wasn’t available for it. But, the group leader asked me to practice over the phone because they were not sure of my capabilities as a disabled person, she said.

In December 2015, after her debut as a stand-up comedian, Ms Goyal continued to use humour to challenge existing notions around disability and gender. Even then, people questioned her choice of talking about disability while other comedians would talk about their lives. However, disability is a part of Ms Goyal’s life, as she says.

If you think my life is an issue, it is not. I actually do comedy about my life. Now that I am married, I will make jokes around my husband, she said and laughed on the call.

Through her non-profit organisation Rising Flame, Ms Goyal and her team, are working for the recognition, protection, and promotion of human rights of people with disabilities, particularly women and youth with disabilities. The organisation aims to build an inclusive world in which diverse bodies, minds, and voices thrive with dignity, and enjoy equal opportunities and access.

Rising Flame was born out of the experiences of persons with disabilities. I saw a clear gap where disabled leadership wasn’t valued. They had access to education and employment but they were not still seen as decision makers. People were deciding for them. The majority of our team is disabled, like, I am the Founder and Executive Director and I am blind, she said.

To promote the idea of inclusion and leaving no one behind, Rising Flame recently started a campaign ‘My Tale Too’, which aims to rewrite the narratives of popular movies or novels with people with disabilities in the lead. Over a dozen stories have been written by women with varied disabilities like two of the women are acoustic, one is hard of hearing, and one is queer and has a locomotive disability, which refers to disability in legs.

We will soon be publishing the stories where you will have acoustic Ugly Duckling, hard of hearing Rapunzel, and deaf Snow White. By rearranging such stories, women will reclaim their narratives, Ms Goyal said.

The disabled-feminist activist is on the diversity and inclusion task force of FICCI, and sits on the advisory board of Voice, a grant making project by the Dutch ministry. She has been a global advisor to UN Women’s Executive Director and worked with a range of national and global women’s rights, disability rights, and human rights organisations. When asked where we are still lacking when it comes to leaving no one behind and ensuring inclusion, Ms Goyal said,

Mindset of the people is a big challenge. Once I was at a Mumbai airport and a woman, from the airport staff, assisting me was taking me through a narrow passage. Instead of telling me to turn around and walk sideways, she grabbed me by my waist and turned me around. When I raised it, I was told that “we are trying to help you”. Would she or any other person have done the same with a “normal” woman? The issue is that we, people with disabilities, are not counted as a part of normal diversity. Like, in a class, there are some slow learners and some are fast. But if you look at disability as diversity, you will find someone who learns through audio because they are visually impaired, two students learn through sign language, five others learn through art.

While signing off, the comedian and activist said, 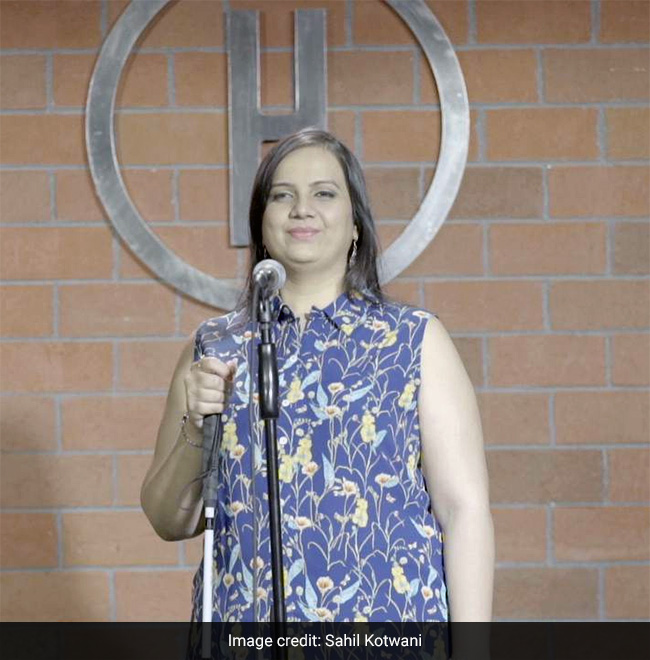 When I talk to corporates, I say, at hindsight, I feel sorry because you had to pay lakhs of rupees and go to a business school but I learned all of those lessons in life. I learned crisis management, innovation, adapting to change, empathy, inclusion, and strength of diversity by becoming blind.

Related Topics:
Disability Leaving No One Behind Mumbai
Up Next

‘My Ability Is Stronger Than My Disability: How Shaurya Trust Foundation Is Skill Training And Empowering Persons With Developmental Disability