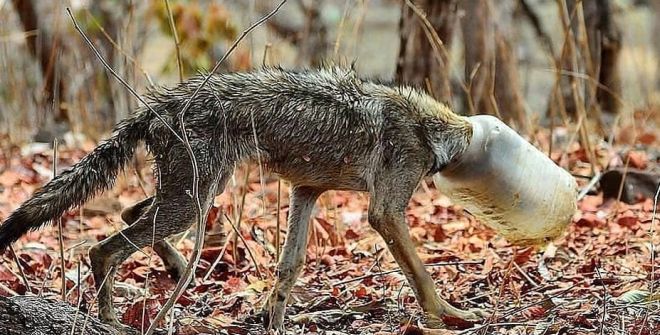 New Delhi: Three years ago, 25-year-old Tanay Panpalia, a chartered accountant and wildlife enthusiast from Nagpur, woke up to the horrors of the damage excessive use of single-use-plastic and other plastic items were causing to the environment because of an unusual incident. He witnessed a starving wolf in the jungles of Umred with his friends, who had not eaten for weeks as its head was stuck in a plastic container. This horrific sight stayed with Tanay, it is a sight he wishes is never repeated.

Also Read: Rescued Stork With Beak Shut By A Plastic Ring Highlights Yet Again The Danger Posed By Plastic

Tanay and his friends knew if they didn’t do something immediately to help the wolf, the creature would die of starvation. They decided to act and called the Forest Department Of Nagpur for help. Finally, after three hours of rescue efforts, the wolf was saved, finally freed from the plastic container. Tanay believes that the plastic jar belonged to someone from the nearby area and was carelessly discarded after it being used for storing food grains. But given the state of plastic pollution in the country, it cannot be said with certainty if a repeat of such incidents is avoided.

That’s the problem with us, we use plastic a lot, discard it without thinking the danger it will pose to the environment or the animals. That was the day I realised the many dangers of using plastic items and decided as an individual I will do my bit for the environment. From that very day, I stopped the usage of single-use plastic items. Moreover, started guiding and educating people, whosoever I met, like my neighbours, about the dangers of using plastic carelessly, said Tanay while speaking to NDTV.

Also See: A Photo Feature On The Impact Of Plastic Pollution On Life On The Planet

Tanay also initiated a group with a mission to make people of Nagpur switch from using plastic containers to a more environment-friendly alternative such as steel containers. He succeeded to some extent but knew the kind of change he wants can only come if the government steps in with some kind of law or bans on the use of plastic items.

It took three years for his wish to finally come true. The Maharashtra Plastic Ban came into effect on June 23 this year, wherein the use of single-use plastic items such as plastic bags, disposable plastic products – spoons, forks, cups, plates, glasses, bowls, and containers, disposable thermocol items is prohibited.

Three weeks since the ban was announced, Tanay feels, there is definitely a huge difference in the city. Plastic waste has been reduced to half; there is less plastic in the markets and public areas. The restaurants and food home delivery services have become environment-friendly, as the food is either delivered with steel or eco-friendly cutlery and takeaways are no longer wrapped in plastic packaging, instead, customers are asked to bring in their own tiffins.

Tanay hopes that the much-needed plastic ban in Maharashtra will prove to be a success and an example for other states.

The plastic ban is the need of the hour and I am happy to see the difference in my city. We, as people need to stop depending so much on plastic, it is posing a grave danger to the environment and it is high time we realised it. We all should think twice before discarding any single-use plastic items, because one may never know how unknowingly they can harm the animals or the environment, signs off Tanay.

Plastic Ban In Ahmedabad: Rs 90 Lakhs Collected In Fines, 10,000 Kilos Of Plastic Seized Within A Month