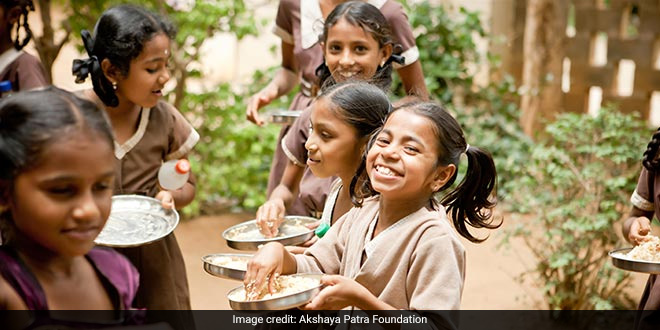 New Delhi: Pawan Kumar is a student of Government Higher Primary School, Obhichudanahalli, Kanakpura main road in Karnataka’s Bengaluru. For Pawan, mid-day meal – hot and freshly cooked meals served to emaciated children – is one of the biggest sources of daily nutrition. The key objective of the mid-day meal is to improve the nutritional status of children, their enrolment, attendance and retention rates in schools and other education centres. According to Pawan’s mother Indira, mid-day meal scheme has been successful at least in the case of her child’s growth and development. 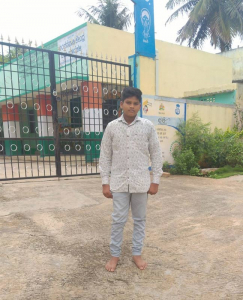 Earlier my son used to be lean and his concentrations levels were abysmally low. He would not show much interest in regular activities like playing or studying. However, now, he has gained weight, become very active and even has improved levels of interest. Pawan tells me that he gets to eat Sambar with a variety of vegetables; desserts like Payasam and sweet rice has loads of dry fruits, dates and ghee. The school in-charge also told us that now children are given fortified rice which has additional micronutrients than regular rice. At school, children are weighed every three months and the last time Pawan’s body weight was checked, an increment of 2.5 kgs was recorded, said an elated Ms Indira while speaking to NDTV.

Ms Indira also said that a similar kind of improvement has been seen among Pawan’s friends. Mid-day meal has indeed proven to be helpful but according to the Akshaya Patra Foundation, India’s largest mid-day meal serving organisation, lately, fortification of staples has provided additional benefits.

Fortification of staples simply means adding micronutrients (vitamins and minerals) to foods irrespective of whether or not the nutrients were originally present in the food.

How Fortification Is Improving The Nutritional Quality Of Mid-day Meals

In 2016, the Department of School Education, Government of Karnataka, and Gujarat decided to improve the nutritional and learning outcomes by using fortified staples to prepare meals served to children under Mid-day Meal in selected schools. The Akshaya Patra Foundation which is already the implementing partner of the Government of India’s flagship school feeding programme, the Mid-Day Meal Scheme, chipped in.

Elaborating on the aim of the project, the Akshaya Patra Foundation said,

The objective is to introduce cost-effective, micronutrient-rich staples to public safety net programmes like the mid-day meal scheme. Through fortification, we seek to reduce the burden of malnutrition in school-going children. For the project, the target group is children (6 to 14 years) receiving MDM.

Under the project, meals prepared with fortified rice, wheat flour, oil and double fortified salt were served to children to improve their nutritional and learning outcomes. Overall this resulted in improved attendance and retention in schools. 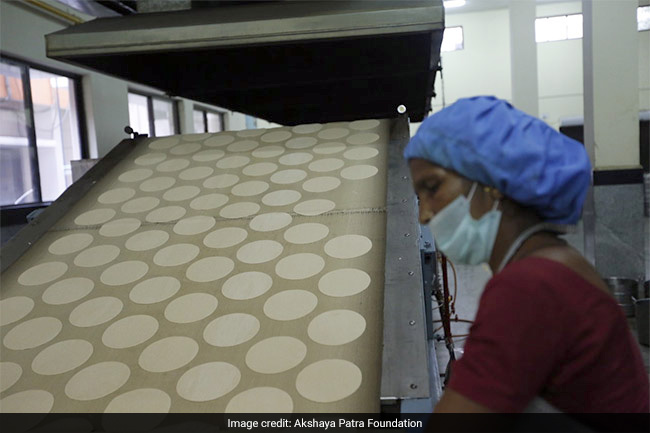 Rice is fortified with essential nutrients including Iron, Folic acid, Vitamin B12, Vitamin A, Vitamin B1, Niacin and Vitamin B6 by simple, cost-effective technology.

The double fortification of salt means adding both iron and iodine to edible salt.

The Impact Of Food Fortification In Karnataka

In 2016, Sambodhi Research and Communication conducted a baseline study covering 1,988 students (6 to 10 years of age) from 50 selected schools spread across five districts in the state. The study revealed that 22.6 per cent of children were afflicted with wasting (low weight for height), 16.9 per cent with stunting (low height for age) and 28.6 per cent were found to be underweight. Noticeably a low proportion of students (68 out of 100 students) were taking iron-rich food in their daily meals at both home and school.

The study was followed with intervention – fortified mid-day meals – the impact of which is evident with the decline in the levels of different forms of malnourishment. After two years, an end line study was conducted which noted about 9 per cent reduction in underweight cases, 3.8 per cent decrease in stunting and 3.5 per cent drop in child wasting. 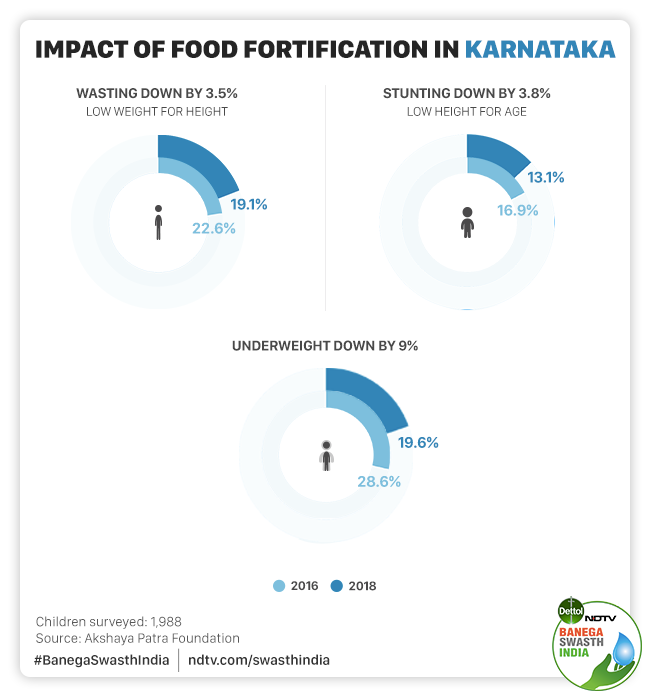 In Karnataka, introduction of food fortification in mid-day meals led to reduction in different forms of malnutrition among children

Also Read: Poshan Maah 2020: What Has Been The Impact Of COVID-19 Pandemic On India’s Malnutrition Targets 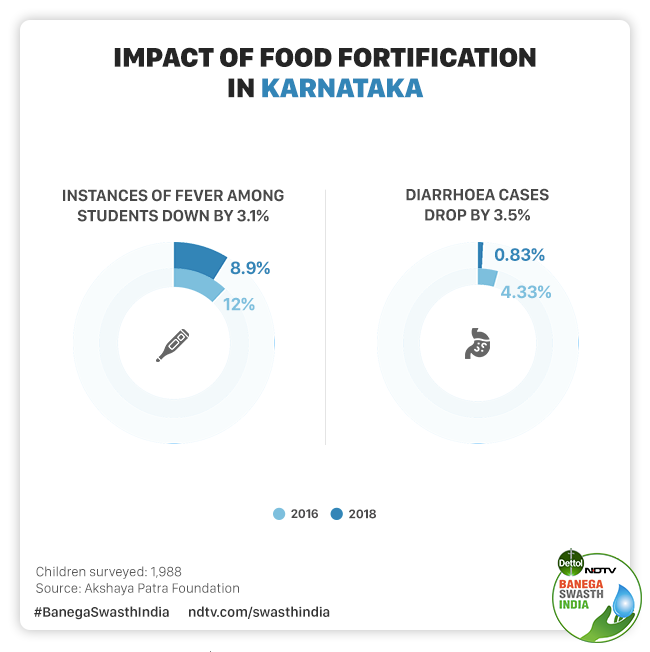 In Karnataka, introduction of food fortification led to reduction in instances of fever and diarrhoea

The Impact Of Food Fortification In Gujarat 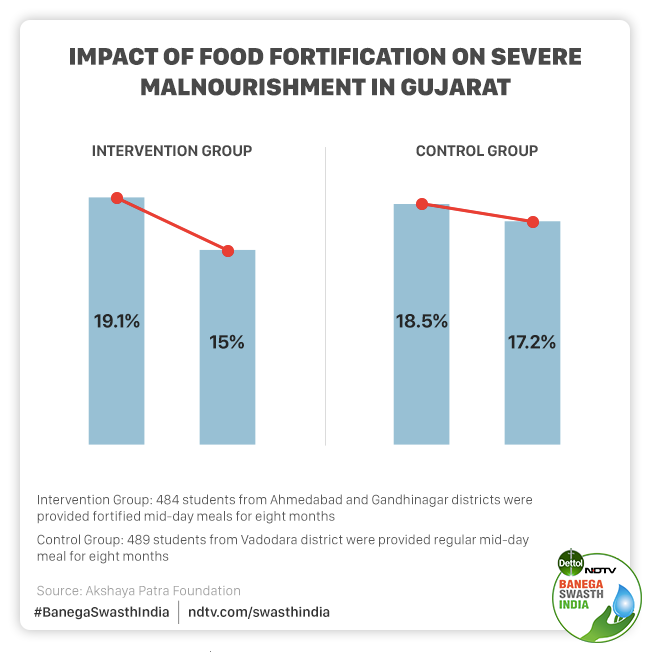 The impact of rice fortification on students of Gujarat

Also Read: Poshan Maah 2020: Why Protecting Health And Nutrition Rights Of Children During COVID-19 Is Important For India, Experts Speak

What Are The Challenges Of Fortification?

The Copenhagen Consensus estimates that every Rs. 1 spent on fortification results in Rs. 9 in benefits to the economy. It requires an initial investment to purchase both the equipment and the vitamin and mineral premix, but the overall costs of fortification are extremely low. Nutrients are added to staple foods since they are widely consumed thus making it an excellent way to improve the health of a large section of the population, all at once. Also, neither does fortification changes the characteristics of the food nor does it requires any changes in eating patterns or food habits of people, explained the Akshaya Patra Foundation.

Though it’s an easy way to make children consume vital micronutrients, lack of availability of fortified food and food manufacturers is a challenge. While implementing fortified rice in mid-day meal scheme in schools of Karnataka and Gujarat, one of the biggest challenges the team faced was the lack of fortified rice kernel (rice like grains) manufacturers. 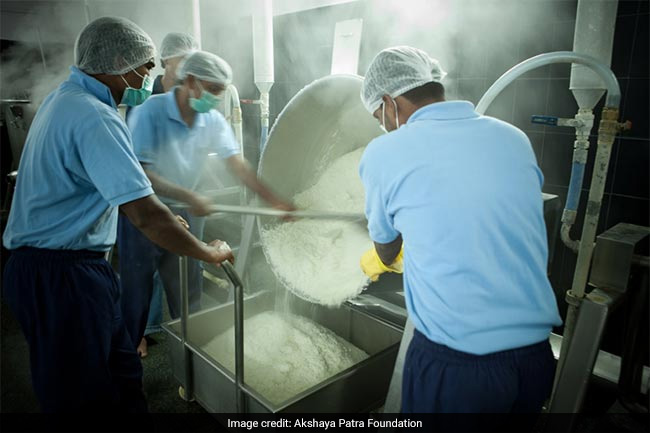 Elaborating more on the challenges in the process of food fortification, the organisation said,

India has been promoting food fortification since 1950s but still, not many people have knowledge about it. According to the Akshaya Patra Foundation that has been implementing the project on the ground, for successful uptake of the program, both teachers and parents must be made aware about the fallout of micronutrient malnourishment through sound communication outreach strategies.

Apart from the dietary fortification, we also require the WASH (water, sanitation and hygiene) training for school children as a complementary strategy, stated the organisation. 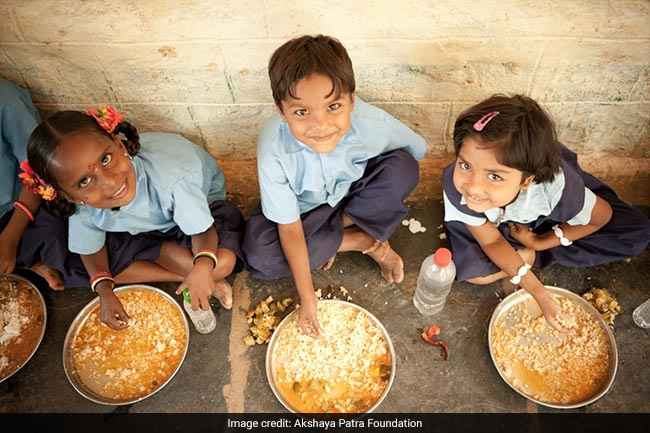 The fortification project has been appreciated by NITI Aayog and also got a mention in ‘Health and Nutrition Practice Insight Volume II’ – a compendium that showcases innovative approaches and effective strategies that have led to a desirable change in the health and nutrition outcomes.