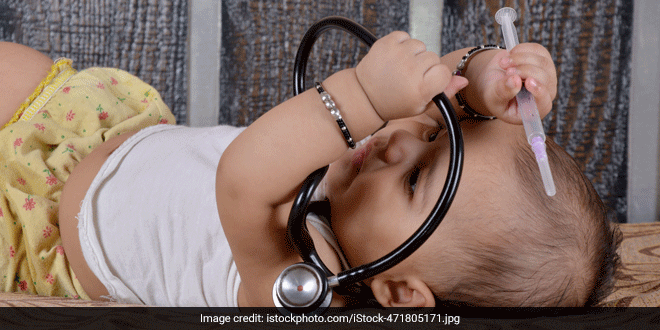 New Delhi: According to the World Health Organisation (WHO), immunisation or vaccination shields a person from life-threatening diseases such as polio, tetanus, and diphtheria and lowers the risk of spreading diseases to others. While talking about vaccines, Dr. K K Aggarwal, President, Confederation Of Medical Associations In Asia And Oceania, said that vaccines trigger the body’s own immune system to act and safeguard the individual against the subsequent infections. Dr Vishal Sehgal, Medical Director, Portea Medical added that when done in a timely manner, immunisation can serve as one of the most efficient and cost-effective health interventions worldwide. He said that about 2-3 million deaths can be prevented every year globally with proper immunisation. However, there are a lot of myths and misconceptions around immunisation which sets in ‘vaccine hesitancy’ or delaying/refusing to get or let their children get vaccinated. On this National Vaccination Day, which is celebrated every year on March 16 to raise awareness among people about the importance of getting timely vaccination against vaccine-preventable diseases, experts debunk some of the most common myths and misconceptions around immunisation.

Myth: Vaccines can cause severe side-effects like autism in children and even death

Fact: This is one of the most common myths around vaccines among a lot of people, said Dr. Sehgal. He added that autism has been falsely linked with the vaccine for MMR (Measles, Mumps, and Rubella) and a number of studies have been undertaken that have proved that there is no association between immunisation and autism which is caused due to multiple factors. He said that such rumours get wind because in most cases, children are diagnosed with autism around the same time as their immunisation schedule. He further asserted that vaccinations do not cause any fatal disease or death.

According to Dr. Aggarwal, side-effects of vaccines are rare and mild that include fever or slight pain in the area where the vaccine was administered but these wane away soon. He added that in a few cases, children may develop symptoms like seizures but such side-effects are extremely rare and are carefully monitored by the doctors.

The experts assured that vaccines are rigorously tested and adhere to strict standards before they are put out in the markets.

Fact: Dr. Sehgal said that getting multiple vaccines at one time is safe and effective and does not cause any side-effect. He said that in case of babies, it is better to opt for multiple vaccines instead of spacing out vaccines over a longer period of time. This is so that the child does not get exposed to a life-threatening virus in the meantime because an infant comes in contact with countless organisms every day. He said that parents must follow the vaccine schedule prepared by the paediatrician and should not delay immunisation.

Also Read: Opinion: How Crucial Are Vaccines For Preventable Diseases?

Myth: One can shield oneself from infections by maintaining proper hygiene and sanitation and so vaccines are not really required

Fact: The experts said that while maintaining proper hygiene and sanitation will ensure a better standard of life and reduce the risk of infection, it will not protect against such infectious diseases that can spread despite cleanliness and good living conditions. Dr. Sehgal said that delaying or denying vaccination will make people vulnerable to a number of infections.

Myth: It is better to get immunity by acquiring the infection naturally as compared to vaccination

Fact: Vaccines trigger the immune response in the body in a similar way to the response produced by natural infection, without putting the health and life of the individual at risk, said Dr. Aggarwal. He said that the price paid for the immunity through natural infection is much higher. While explaining further he said,

Take, for example, a pregnant woman who has not been vaccinated for Rubella. If we let her get immune to the virus the natural way, the damage can be as high as birth defects from congenital rubella or even death. We cannot let this happen and so we have to give her shot and prepare her immune system to respond to an attack from such a virus.

Fact: Dr. Sehgal asserted that immunisation is a part of preventive medical care and is important for pregnant women to protect the health and life of both – woman and baby. He asserted that flu shots are extremely important for pregnant women as catching flu during pregnancy can lead to serious pregnancy complications like preterm labour and preterm birth. This is because the changes in the body functions during pregnancy make women more likely to fall seriously ill from the flu.

Myth: A baby being breastfed is protected from infections and does not need to be vaccinated

Fact: According to the experts, while breastfeeding provides some protection against certain infections like viral respiratory infections, diarrhoea among others, this protection is incomplete. Dr. Aggarwal said that breastfeeding is not a substitute for vaccination against a host of viruses that a child gets exposed to every day.

Myths: Adults do not need to get vaccines

Fact: Vaccines are helpful at all stages of life- right from infancy to childhood to adult life and old age, said Dr. Sehgal. He added,

Adult vaccination is not much common in India but it really needs to become a part of our public healthcare system as the adults too need protection from various deadly diseases like human papillomavirus vaccine, hepatitis A and B, pneumococcal among others. Our senior citizens who are very susceptible to pneumonia and must be given the pneumococcal vaccine. Rubella vaccination is given to females who are of reproductive age group. The human papillomavirus vaccine is given to prevent cervical cancer in women. Then there are also travel immunisation which people should take while travelling to other countries. Like Indian citizens travelling to Africa should take the yellow fever vaccine. Similarly, vaccination against disease like typhoid, tuberculosis can be taken while travelling to European countries.

Violation Of Firecracker Ban Will Be Penalised Under Air Act: Delhi Environment Minister