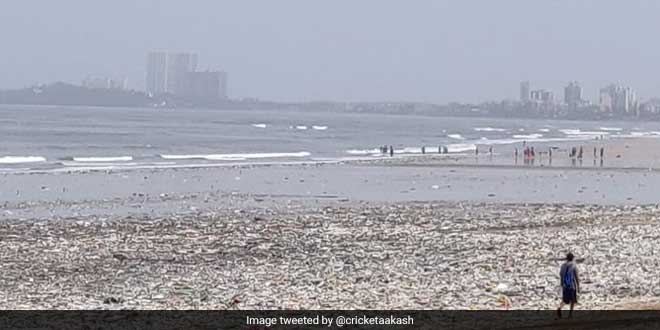 New Delhi: Every year, Mumbai’s Juhu beach turns into one big garbage dump making headlines for being one of the city’s dirtiest beaches when tonnes of garbage being thrown up by the sea. Recently, also tonnes of garbage, mostly plastic waste were thrown out from the sea along the shores of Mumbai, making it extremely unpleasant and stinking sight. Social media has been abuzz since then with many citizens, even celebrities coming together to vent their ire at the neglectance of the human beings who have been dumping trash into the sea without knowing its consequences.

The Brihanmumbai Municipal Corporation (BMC) on Monday removed around 430 tonnes of garbage and said that it will need two to three days’ time to clean the beach fully. Already a number of cleaning machines, as well as labourers, have been deployed for the task.

Actor and Sustainable Development Goals Advocate, Dia Mirza was one of the first one to take it to her social media asking authorities to take action. She said, “All our trash washed up on Juhu beach.”

All our trash washed up on Juhu beach @DisasterMgmtBMC, been this way for the last 5 days. Bobcats required for #CleanUp. @MCGMswm @AUThackeray pic.twitter.com/3uj27pUDwR

One truck is not enough to clear this garbage. #JuhuBeach Lesson for me and you? Stop using #SingleUsePlastics and tell every company that uses packaging to pick up their trash! Extended Producers Responsibility is necessary.

One truck is not enough to clear this garbage. #JuhuBeach Lesson for me and you? Stop using #SingleUsePlastics and tell every company that uses packaging to pick up their trash! Extended Producers Responsibility is NECESSARY. @MCGMswm @AUThackeray @DisasterMgmtBMC #CleanSeas https://t.co/gXnEvRmna1 pic.twitter.com/N5Lim6AQPy

Former Indian Cricketer, Aakash Chopra shared a before and after images of Juhu Beach and added,

The Sea is going to throw it at all the coasts. It’s what we as humans do to it round the year. It’s time we reduce our waste generation and become responsible citizens of our planet.

Arranging for more, but the sea is going to throw it at all the coasts. It’s what we as humanity do to it round the year. It’s time we reduce our waste generation and become responsible citizens of our planet.
@DisasterMgmtBMC https://t.co/CpDgvEbv46

Citizens too joined in urging everyone to stop polluting the beaches.

A large portion is due to beach littering and a large portion is what the sea throws back. Garbage doesn’t walk across the city to the beach. People in Mumbai don’t understand self-discipline unless it’s forced upon them. Simple thing like spitting is not banned.

But, when will @mybmc install drain filters, to prevent garbage from entering the sea every day?

When will citizens & BMC learn that cleaning the beach is not a solution. It is a mere symptom of an environmental disease! pic.twitter.com/xG5UT2Iwsh

Congratulations! We've got a new garbage dumping ground in the city. It's called the Juhu beach! Mostly plastic that I could see. Waste thrown back at humanity by the sea. Let us take responsibility this time and not blame BMC, okay?! pic.twitter.com/XlkFWJpjob

Mygod how can the people in charge to take care of the juhu beach not see garbage, Mumbai needs very strong house keeping urgently and Dustbins and not street Marshalls, only housekeeping and dustbins https://t.co/zzvxba4que

Last year around the same time period, Marine Beach also made headlines when the sea dumped a lot of garbage. That time, approximately 361 tonnes of garbage was thrown on the city’s beaches.