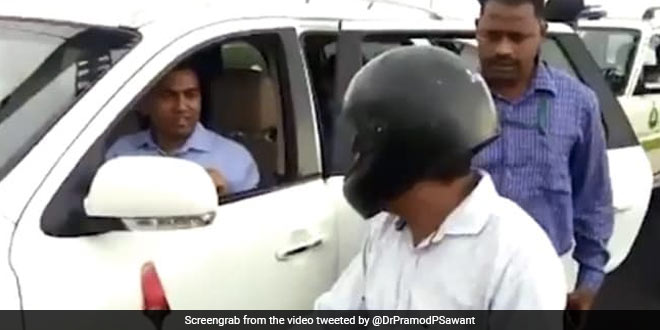 New Delhi: “As responsible citizens, we need to begin disposing of waste properly and also educate and guide our fellow citizens to do so,” tweeted the Goa Chief Minister Pramod Sawant as he stopped his convoy upon noticing a man dumping floral waste into the river Cumbharjua. The incident took place in the morning of June 11 in North Goa, when Mr. Sawant’s convoy was heading towards the state capital. Mr. Sawant took to twitter to share a brief video where he can be seen chiding the man by saying, “Don’t do this. At least don’t do it again”.

The man in question was riding a scooter and was caught throwing ‘nirmalya’ (flowers offered to God) in the river from a bridge, as it is considered as a sacred way of discarding the same. The Chief Minister further urged the man to act as a responsible citizen and not pollute the rivers.

Earlier today, while travelling over Gaundalim bridge, came across a citizen who was disposing nirmalya in the river. I requested him to desist from doing so. As responsible citizens we need to begin disposing wastes properly and also educate & guide our fellow citizens to do so.

Let us work together for a #SwachhBharat.

“Let us work for a Swachh Bharat,” the CM also tweeted.

The issue of dumping flower waste in Indian rivers is a problem often overlooked. Since temple offerings are considered as sacred, it’s discouraged to throw them in a trash bin or landfill. People often dump all their flower waste in the nearest local body like ponds, lakes and rivers. According to a report by Centre for Science and Environment, floral waste accounts 16 per cent of the total river pollutants in Ganga.

Toxic arsenic, lead and cadmium from the farm-runoff, pesticides and insecticides used to grow flowers, mixes with the river water, making it highly poisonous. These toxic pollutants affect lives of 400 million people – linked to contracting water borne diseases like cholera, hepatitis as well as severe diarrhoea, considered as the leading causes of child mortality throughout India.