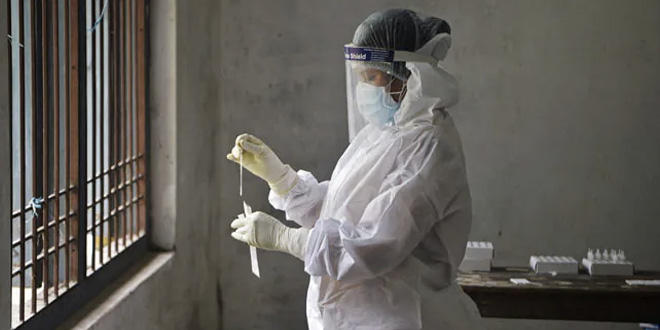 New Delhi: Amid an uptick in daily cases of COVID-19 in Delhi and the positivity rate going beyond two per cent, there has been a rise of nearly 48 per cent in the number of home isolation cases in the last one week, according to official data, reported news agency Press Trust of India. On Thursday, the number of home isolation cases stood at 574 while 325 new coronavirus cases were recorded with a positivity rate of 2.39 per cent. The daily cases have been on the rise in the last few days while the positivity rate here has been registered in excess of one per cent since April 4 when it had stood at 1.34 per cent.

Also Read: Spike In COVID-19 Cases In Delhi-NCR: Should Schools Be Shut Or Mask Mandate Be Brought Back?

On April 8, the city had reported 146 cases with a positivity rate of 1.39 per cent and 388 patients were under home isolation, according to the data shared by city health department authorities.

Doctors on Tuesday had said that it was “not a panic situation” as the count of daily cases was still low, but had cautioned against dropping the guard.

Many doctors had also said that very few people are going for a Covid test after onset of symptoms and people are now preferring to recuperate at home. But with a rise in the positvity rate, there is a parallel increase in the number of home isolation cases too. Delhi’s COVID-19 tally and the number of deaths due to the disease had stood at 18,67,206 and 26,158 respectively on Thursday, according to official data.

On Monday, the positivity rate had stood at 2.7 per cent, the highest in two months. It was 2.87 per cent on February 5. The number of daily Covid cases in Delhi had touched a record high of 28,867 on January 13, during the third wave of the pandemic.

The city had recorded a positivity rate of 30.6 per cent on January 14, the highest during the third wave of the pandemic, which was largely driven by the highly transmissible Omicron variant of the coronavirus.

On February 24, the home isolation cases count had stood at 1,559, registering a steep fall in the figures. It subsequently fell further, only to record a rise again in April.

COVID Cases Rise In Delhi-NCR: Should Schools Be Shut Or Will Strict Implementation Of Masks Work?