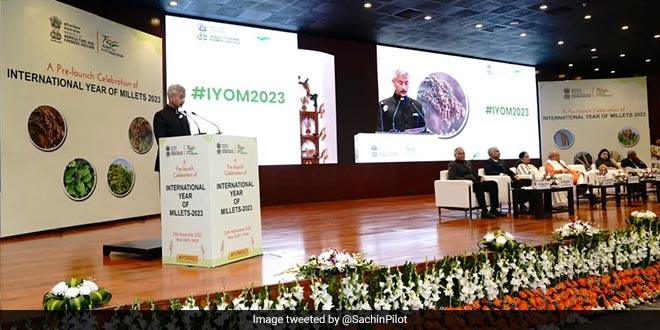 2023 will be celebrated as the International Year of Millets

New Delhi: External Affairs Minister S Jaishankar on Thursday said a concentrated global push for millets is needed as the three Cs of climate change, Covid-19 and conflict are impacting food security in some way or the other. Millets are grown in 130 countries, including India, and a concentrated push by these countries for millets would enhance food security, increase self-reliance and global availability, the minister said. Speaking at a pre-launch celebration of 2023 as the International Year of Millets, the minister shared how each of the 3Cs has impacted food security putting the global economy at risk due to the concentration of production centres and trade disruption.

India envisions #IYOM2023 to be a truly global partnership in awareness and usage.

He said de-risking the global economy requires more decentralised production and more self-reliance as well as “willingness” on part of the country not only to grow for themselves but to help each other.

Against this backdrop, the minister asked High Commissioners and Ambassadors to India to give much greater attention to food security and think of millets from the point of view of international relations apart from its nutritional, production and climate benefits.

Look at the state today of the world. I would like you to reflect on the relevance of millets to that. If there are three big challenges which we have experienced and continue to experience. They are to my mind are 3Cs: Covid, Conflict, and Climate. Each one of them some way has impacted food security.

He suggested that in international relations, every country should be giving “much greater attention to food security” and looking for more resources, diversity, production, reliable and resilient supply chain.

“If there is today a concentrated global push of millets grown in 130 countries, what you will see (is) these 130 countries will surely enhance their own self-reliance and food security,” he said.

In the process, they will actually contribute to a larger amount of foodgrains which will be available for global consumption, he added.

He said millets-growing nations should not only think purely as nutritional or agricultural exercise or something which will improve farmers’ income, which is extremely important but do also think of larger implication, greater protection of more diversity of food which has other virtues.” Sharing the impact of 3Cs on food security, Jaishankar said concentrated production centres and trade disruptions affect the global economy.

The Covid-19 period reminded what the pandemic would do to food security. He said,

I think this was not the first pandemic and I am sure this will not be the last one. …I think there will be a future pandemic. How do we prepare for food security implications if there are future pandemics,.

The conflict in Ukraine, the leading global wheat exporter, led to an escalation in global food prices, speculation, and shortages. There are also growing concerns of climate change that can lower production but also disrupt trade, he said.

If you put Covid, conflict and climate, I would suggest, perhaps in international relations, we should all be giving much greater attention to food security.

“As we look at the world today, de-risking the global economy requires more decentralised production, more self-reliance. It requires certainly willingness on part of the country not only to grow for themselves but to help each other,” he said adding that this is the message of the international year of millet.

Considering the nutritional value of millets, millets were notified as nutri-cereal in 2018. It has also been included under Poshan Mission campaign.

Besides, India has more than 500 start-ups in millet value additional food chain. The government’s Indian Institute of Millets Research has incubated 250 startups. More than 66 start-ups have been given funds of Rs 62.3 million, while five startups have been approved for further funding, he said.

Think-tank Niti Aayog and World Food Programme are focusing on mainstreaming the millets, he added.

Around 100 High Commissioners and Ambassadors to India present at the event tasted global recipes made of millet at lunch organised at Sushma Swaraj Bhawan here.