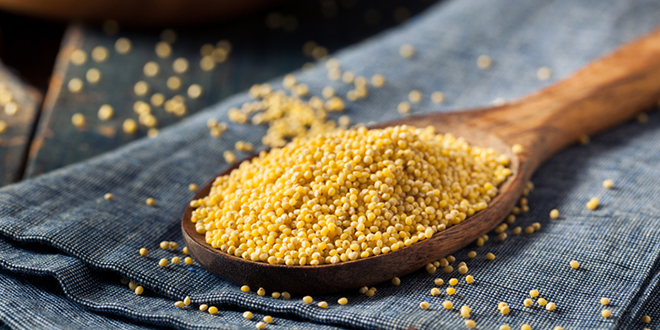 A lowdown on nutritional facts about the superfood - Millets

New Delhi: Millets – a cereal grain that belongs to the grass family are repository of protein, fibre, vitamins and minerals. Thus, it is often touted as ’superfood’ because of its nutritional value. The best part is that this grain can be used in everything – from sides to salads and mains. There are different kinds of Millets, which include:

Known as the ancient native crop of India, Millet is also one of the oldest cultivated grains in the world. It has been growing throughout Africa and Southeast Asia for thousands of years. According to the Ministry of Agriculture in India, Millets are traditional grains, grown and consumed in the Indian subcontinent from the past 5000 years.

According to researchers of International Crops Research Institute of the Semi-Arid Tropics (ICRISAT), if rice is replaced by millet in meals for a duration ranging from three months to four and a half years, it can boost growth in children and adolescents by 26 per cent to 39 per cent.

Here’s a breakdown of the nutritional value of Millets:

As per the Indian Institute of Millets Research (IIMR), Millets are nutritionally superior to other grains, it contains high number of proteins, essential amino acids, minerals and vitamins. IIMR states that Millets contain:

IIMR also adds that Millets are also a natural source of iron, zinc, calcium and other nutrients that are essential for curbing the problem of malnutrition, which is highly prevalent in India.

According to Food Safety and Standard Authority of India (FSSAI), Millets have high amount of dietary fibre therefore it often acts as a “prebiotic,” which means it supports good bacteria in your digestive system. FSSAI also states that dietary fibre is also important for adding bulk to stools, which helps keep you regular ((MEANING?)) and reduces your risk of colon cancer.

3. Millets Are Good For Your Skin

According to IIMR, along with the nutritional properties, Millets have higher content of niacin, which helps the body manage more than 400 enzyme reactions. Niacin is also very important for healthy skin and organ function.

IIMR states that Millets contain slow releasing glucose and are low in glycemic index. According to the experts, this is a very important factor in fighting the global problem of diabetes. IIMR also adds that it is well recognized that the incidence of diabetes mellitus and gastro-intestinal tract related disorders are minimal among the population using Millet grains as staple food.

As per IIMR, The fiber present in Millets help reduce the amount of “bad” cholesterol in the blood. Secondly, the fiber helps in absorbing cholesterol, allowing it to be safely carried out of your system. Some studies have shown that consuming Millet regularly can also raise your “good” cholesterol levels and lower triglycerides.

7. Millets Are Also Good For The Planet

Apart from all these health benefits of the crop, Millet is also tagged as ‘Smart Crop’ as there are advantages loaded in its favour such as low-maintenance, disease, pest resistance and ecological benefits, states International Crops Research Institute for the Semi-Arid Tropics. It also adds that Millet is known as C4 crops as they have higher efficiency in absorbing and utilizing carbon dioxide. It also adds that most varieties of Millets are well known for their hardiness and have the capacity to withstand prolonged periods of drought, high temperatures and still produce grains and fodder.

Watch: Right To Nutrition, Health And Hygiene Is Not A Privilege, But a Right: Dilen Gandhi, Reckitt