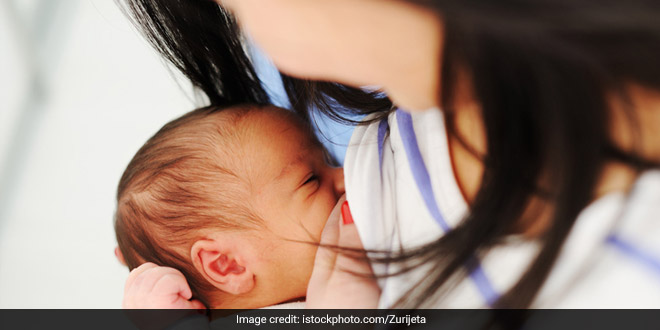 New Delhi: On December 13, Dr Hash Vardhan, Union Minister for Health and Family Welfare released the key findings of the fifth round of the National Family Health Survey (NFHS-5) conducted in 2019-20 for 22 states and Union Territories (UTs) included in the phase-1 of the survey. NFHS-5 findings show a worrying trend in child feeding practices. A significant decline has been reported in children under three years of age who are breastfed within one hour of birth. Breastfeeding, also known as nursing, is the way of providing young infants with the essential nutrients required for their growth and development. WHO (World Health Organization) recommends initiating breastfeeding within the first hour of the birth of a child. NFHS-5 data shows that among the children surveyed, breastfeeding in the first hour of birth had shown a downward trend in 12 states and UTs out of 22. 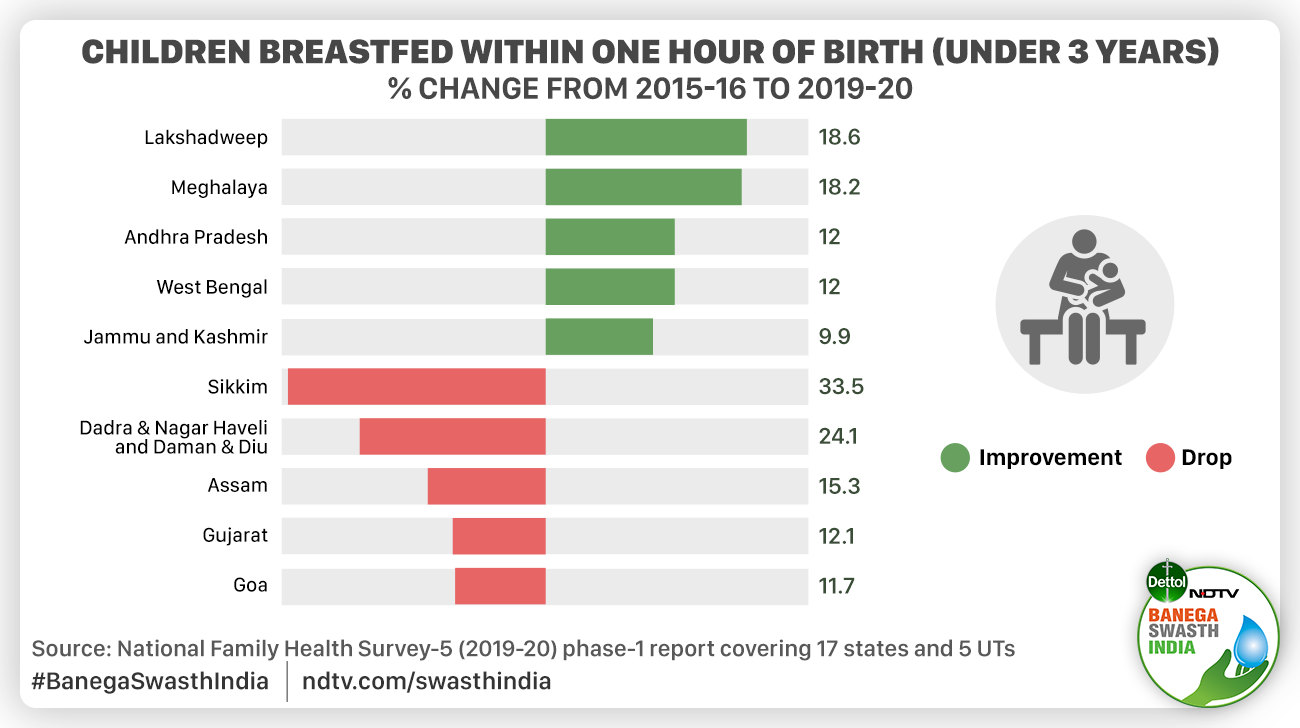 NFHS-5 data shows that among the children surveyed, breastfeeding in the first hour of birth had shown a downward trend in 12 states and UTs out of 22

Among 22 states and UTs, Sikkim has reported the sharpest decline of 33.5 per cent in initiating breastfeeding within an hour of birth. Talking to NDTV about the importance of early initiation of breastfeeding, Dr. Shailesh Jagtap, Senior Technical and Program Advisor at Alive and Thrive, a global nutrition initiative, said,

Colostrum, the bright yellowish, thick, first milk of the mother is rich in proteins and has anti-infective properties. Early initiation of breastfeeding ensures that the infant receives the colostrum. In a conversation with NDTV, Dr Suparna Ghosh – Jerath, Professor and Head Community Nutrition at Indian Institute of Public Health (IIPH – Delhi), Public Health Foundation of India (PHFI), elaborated more on the role of breastfeeding. She said,

Early skin-to-skin contact with a mother makes infants interact more with their mothers and cry less; establish the bond between mother and child; prevents hypothermia in neonates; reduces mother’s risk of postpartum hemorrhage which is one of the leading causes of maternal mortality. If we are not able to improve this crucial indicator, all the aforementioned benefits may get compromised and we may not able to optimally utilise a cost-effective and key initiative to address neonatal, infant and maternal morbidity and mortality.

Also Read: Importance Of Breastfeeding For Both Mother And Child

As per NFHS-5, over 50 per cent of the states and UTs surveyed in the first phase have reported a decline in early initiation of breastfeeding. Talking about the possible reasons behind this drop, Dr Jagtap listed three reasons and said,

The data tells us that on one side institutional delivery rates have significantly improved reaching the mark of around 90 percent and on other side, early initiation of breastfeeding (EIBF) has declined. This hints towards the health facility system being overwhelmed with increased load on the already heavily burdened facilities. Need to look into if these facilities are equipped with adequate staff and have the capacity to support mothers to initiate breastfeeding. Secondly, there is an increase in the C-section deliveries in both public and private health facilities wherein still the breastfeeding initiation guidelines of 4 hours after delivery may be being followed. Recently released joint statement cum guideline that EIBF can be initiated and is feasible within one hour by the Federation of Obstetric and Gynecological Society of India (FOGSI) and Indian Academy of Pediatrics (IAP) may not have still been brought into practice.

Stating the third reason, Dr Jagtap said still there is a practice of prelacteals feeds (foods given to newborns before breastfeeding) and bottle/formula feeding based on the myth that it will take some time for the mother’s milk to start.

Adding to this, Dr Arun Gupta, Senior Pediatrician and the central coordinator of the Breastfeeding Promotion Network of India (BPNI), said the current trends show a failure to support women during pregnancy and at birth. He added,

Government has guidelines for lactation support staff but no link to budget to post these lactation staff. The government has an MAA (Mothers’ Absolute Affection) programme to promote breastfeeding in hospitals but it leaves out private hospitals. Moreover, this programme is not routinely monitored. 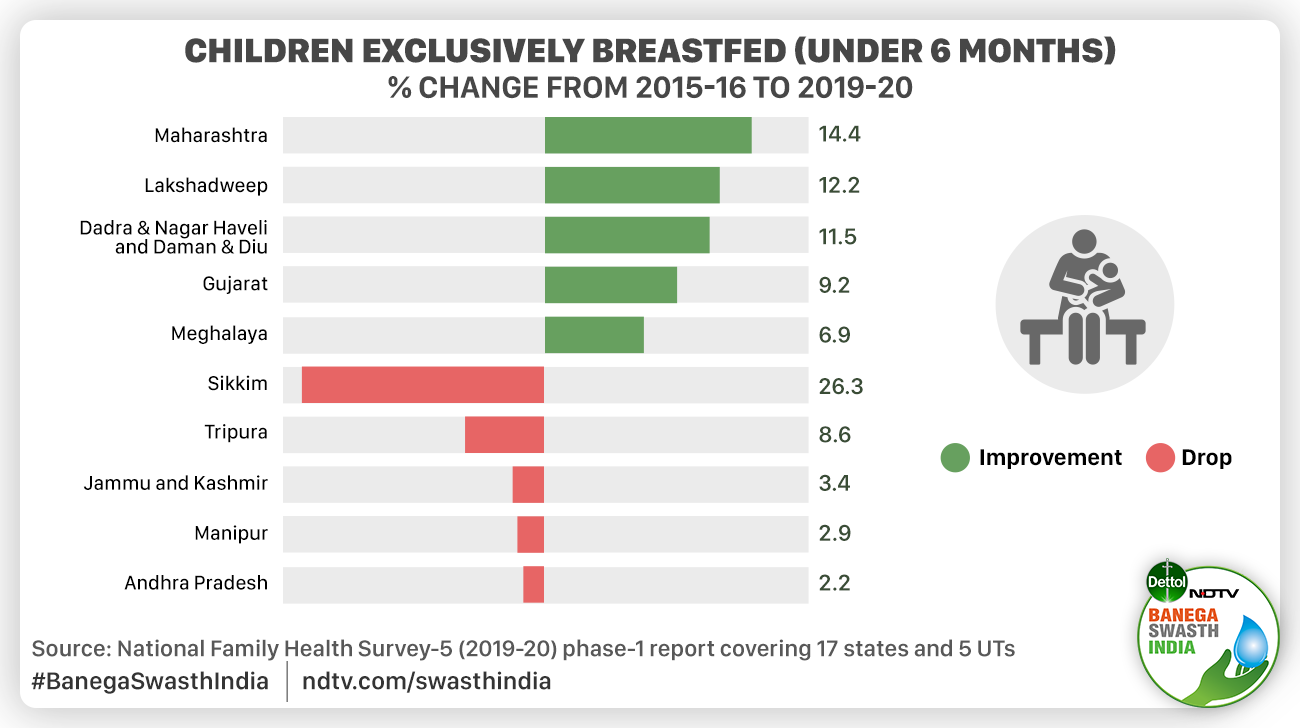 Maharashtra has reported an increase of 14.4 in exclusive breastfeeding whereas Sikkim has recorded a decline of 26.3 per cent. Explaining the importance and benefits of exclusive breastfeeding, Dr Manish Kumar Singh, Secretary IAPSM (Indian Association of Preventive and Social Medicine), Uttar Pradesh and Uttarakhand, said it benefits both mother and children. He added,

The newborn is not fully mature and many organ systems including the immune system are not fully developed. The newborn is prone to infections if anything other than a mother’s milk is given. Also, lack of breastfeeding or initiation of other food items in the first six months can result in the early onset of malnutrition and deaths. The vicious cycle of infection and malnutrition set in early resulting in mortality and morbidity.

Dr Singh also noted that exclusive breastfeeding results in decreased episodes of illness in infants and results in lesser family expenditure on healthcare. It reduces post-delivery bleeding and anemia, delays next pregnancy, protects breast and ovarian cancer and protects women from obesity, he said.

NFHS-5 has also reported an increase in malnutrition especially obesity among children. According to the four experts NDTV spoke to, early initiation of breastfeeding and exclusive breastfeeding till 6 months can aid in eliminating malnutrition. Dr Gupta said,

Breastfeeding In India: The Way Forward

Antenatal care (ANC) counseling on early initiation of breastfeeding is very important as it motivates the mother to initiate breastfeeding early and to seek help. Although the emphasis on at least 4 ANC visits has shown an improvement, the increase is not that substantial. Pradhan Mantri Surakshit Matritva Abhiyan (PMSMA) is a step in this direction. Further advocacy is desired on this issue.

Adding to this, Dr Suparna Ghosh-Jerath listed a couple of measures that need to be implemented at a national and state level to improve the status of breastfeeding. She recommended the implementation of baby-friendly hospital initiative (BFHI) and the International Code of Marketing of Breast Milk Substitutes and all subsequent relevant World Health Assembly Resolutions. She added,

Dr Suparna Ghosh-Jerath also suggested effective implementation of the ten steps to successful breastfeeding in all maternity facilities. These 10 steps include supporting mothers to initiate and maintain breastfeeding and manage common difficulties; counselling mothers on the use and risks of feeding bottles, teats and pacifiers.

Dr Jagtap called for a taskforce or committee to monitor the adherence to IMS (Infant Milk Substitutes) Act by all the health functionaries for early initiation of breastfeeding.

Dr Gupta suggested a key policy change to encourage and support mothers to breastfeed their children. He said,

At community level or block Level, appoint 4 women nutrition and lactation counsellors who are technically competent to monitor growth from birth onwards, analyse the growth monitoring, detect early growth faltering that might happen at 3-4 months, counsel and support women on breastfeeding and complementary feeding after six months, follow up every baby. We must shift the gear from ad hoc approaches to coordinated ones; commit Rs. 300 per child born and ask for results. This way we can move away from lip service to breastfeeding, otherwise don’t expect wonders in NFHS-6.

New COVID-19 Strain Could Have Entered India Prior To December, Says AIIMS Director