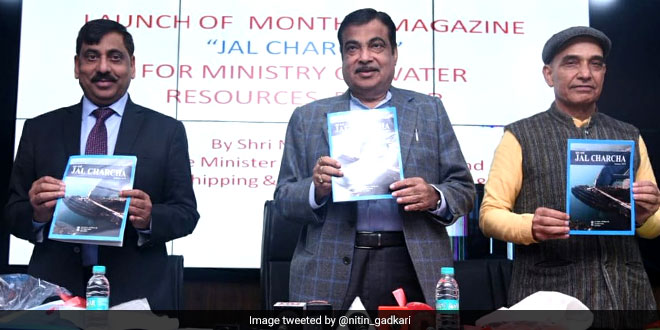 New Delhi: “While the Ministry of Water Resources, River Development & Ganga Rejuvenation is responsible for optimal sustainable development, maintenance of quality and efficient use of water resources to match these growing demands, the participation of people is of utmost importance in conserving every single drop of water,” says Minister Nitin Gadkari in his message, at the inaugural issue of the magazine Jal Charcha. The monthly magazine, launched by Minister Gadkari in the national capital, aims to engage with citizens in informed decision-making at the central level. While speaking at the launch, Mr. Gadkari emphasised on the need to implement successful practices in water conservation in not just India but around the world.

Several steps in the direction of water conservation have been taken in states like Maharashtra, Andhra Pradesh, Telangana and Karnataka and positive results are visible in the form of recharged wells resulting in improvement in socio-economic conditions of the people, he said at the launch event of the magazine at Transport Bhawan, Delhi on Tuesday.

Mr. Gadkari also highlighted the importance of water recycling as well as waste-to-wealth by citing the example of his constituency in Maharashtra.

350 play grounds and 78 gardens have been identified where recycled water is to be used for sprinkling purpose which will help in conservation of fresh water. Recycled water will also be used for construction works.

Apart from talking about the MoU between National Mission for Clean Ganga and Indian Oil for reuse of recycled water in Mathura, he also talked about Delhi Government’s interest in towards utilising the treated water from Okhla at Wazirabad stretch of the river Yamuna. The 22-km stretch from Okhla to Wazirabad is less than 2 per cent of the river but accounts for 76 per cent of the pollution level in the river, mainly due to untreated industrial and domestic waste.

All this shows that awareness on water conservation is building up. There is a need to include NGOs, social organizations and states in this serious issue of water conservation. The key to success in water sector is cooperation, coordination and communication.

Also present at the launch, Secretary U.P. Singh explained “Given the vastness of the subject, while the theme of the magazine would change with every issue, effective management of water resources in an integrated manner will remain at the helm.”

The idea is to provide opportunity to all stakeholders to express themselves on pressing matters of water management.