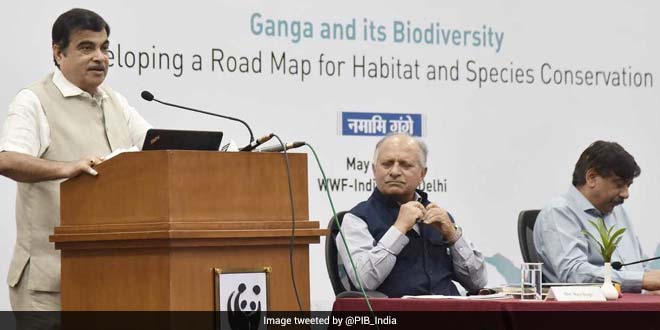 New Delh: Officials indulged in red-tapism resulting in delay of implementation of key Namami Gange projects need to rein themselves and ensure that the credibility of bureaucrats does not take a hit, when it came to implementing the Namami Gange programme. Union Minister for Water Resources Nitin Gadkari, while inaugurating the workshop on Ganga and its biodiversity, said that delays and red-tapism have hurt the Clean Ganga programme and undermines the efforts of those who have actually done significant work. The Union Minister also cited the need to coordinate ecology and economic development to ensure that the river Ganga and its biodiversity can be protected.

The Namami Gange project came under scrutiny in May 2017 by Prime Minister Narendra Modi, who reviewed the project as to why no considerable progress had not been made despite a Rs 20,000 crore budget. Bureaucratic hurdles have been the bane of previous Ganga cleaning campaigns and instances of cleaning committees meeting once or twice a year became associated with earlier Ganga cleanup projects. The Namami Gange project was launched in 2014 and promised to speedily deal with the issue of pollution in Ganga by cleaning the river and address concerns about waste management and disposal near the river’s banks. Mr Gadkari said that bureaucrats must not have negative mindsets regarding the execution of the project. Speaking about the execution of the project, the Union Minister said that he does not take objections to people taking effective decisions.

Under the Namami Gange programme, 47 out of 210 liquid waste management projects have already been completed, as declared by Mr Gadkari to NDTV on May 11. Work is progressing to treat sewage from the top ten polluting cities of Kolkata, Kanpur, Patna, Varanasi, Allahabad, Howrah, Haridwar, Bhagalpur, Farrukhabad and Bally, which account for 70 per cent of the sewage that goes into the river Ganga. Given the multidimensional nature of the Namami Gange programme, which also looks at beautifying the river and encouraging tourism, Mr Gadkari said that in the coming days, the focus of the Namami Gange programme will be on creating opportunities in strengthening livelihoods around the river banks. Mr Gadkari has also assured that 80 per cent of the Ganga will be cleaned by March 2019.

Also Read: Ganga Pollution: Perception That ‘Nothing Significant’ Being Done To Clean Ganga Is Not Correct, 80% Ganga To Be Clean By March 2019, Says Nitin Gadkari

In A First, Smart Toilets With Swanky Cafes And ATM Services Make Their Debut In Hyderabad

Waste Management In Melody: This Song Traces The Problem Of Plastic Pollution Across Beaches And Cities