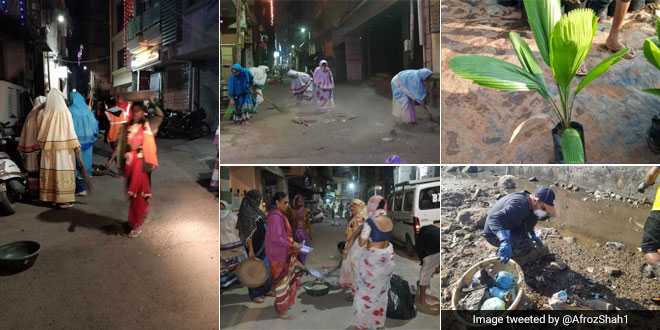 New Delhi: Thousands of residents of the port city of Surat have taken up activities to clean-up and beautify the city under a new cleanliness initiative. Under this movement, the people have taken up cleanliness drives, tree plantations, waste management, recycling, river clean-ups, and raising awareness about cleanliness and sanitation. The movement has been initiated by Dawoodi Bohra (DB) community, a sect within Shia Islam, to mark the 75th birthday of 53rd Da’i al-Mutlaq, spiritual leader and community head Dr Syedna Mufaddal Saifuddin. The movement which will be going on for a long time to come aims at inspiring the people to adopt an eco-friendly and ‘swachh’ lifestyle, says the spokesperson of DB community. The cleanliness drive started about a month ago from Zampa Bazaar, the religious centre of Dawoodi Bohras and has now spread to a number of places across Surat with people from all sects participating in the movement

Our volunteers meet every night and work tirelessly, along with staff from the Surat Municipal Corporation to clean the streets. We send messages out to those residing in the vicinity to join the movement, and together we have been able to create a huge impact. Sweeping the streets on own is a valuable lesson in cleanliness, and we definitely appreciate the effort it takes to keep the city tidy. Recycling especially has been an important part of our drive. There are special trucks which grind wet waste to generate manure. This manure is of great use to farmers. Hence we are planning on conducting more awareness drives with residents to explain to them the importance of recycling.

It is wonderful to see women take up the onus of keeping Gujarat clean. This is just the beginning and we are confident of taking the clean-up mission across the country, with more and more women joining in.

Furthering their commitment to keeping the city clean, representatives from DBWRF met with Gayatri Jariwala, Assistant Commissioner, Surat Municipal Corporation (SMC), to discuss the challenges faced in maintaining the city clean and the solutions to achieve the same. The women proposed to SMC that garbage collection be done twice a day, and requested for separate bins for wet and dry waste. The women also requested SMC to fix the potholes and gutters to make Surat beautiful. They also expressed their concern over stray animals and their faeces, which soil the city, and asked if the SMC could find a solution to this.

It is our mission to make Surat an extremely clean city. However, there wasn’t adequate awareness about the importance of segregating wet and dry waste and how it helps the recycling process. With the Dawoodi Bohra community coming together to clean up Surat, together, we are able to reach out to the masses and create awareness about the same. The impact of this cleanliness drive has been huge and has gone a long way in assisting us with our recycling programme. Our staff too is happy to be a part of the cleanliness and awareness drive and we are witnessing only positive results, due to the efforts.

Along with cleanliness drives and tree plantations, members of Dawoodi Bohra Community, students and other local residents also joined hands with lawyer-activist Afroz Shah to clean the Tapti River, from where they have removed tonnes of plastic waste last month. After the river clean-up drive, the people associated with the movement also held awareness programmes for the people living in slums on the bank of the river on marine biodiversity, and harmful impacts of plastic pollution.

The DB community has announced that it will be launching a ‘biogas mobile app’ soon. This app would encourage the conversion of waste to energy through various methods and creation of a circular economy, the economy where resources are kept in use for as long as possible to extract the maximum value from them. The App will be designed to suggest ways of keeping resources in circulation as much as possible.