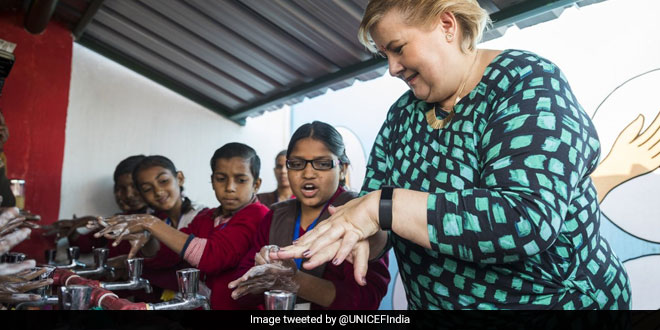 Mumbai: After appreciation and support from Prime Minister of Japan Shinzo Abe, philanthropist Bill Gates and international organisations like UNICEF and World Health Organisation, Swachh Bharat Abhiyan has found another supporter in Norwegian Prime Minister Erna Solberg. During her three-day visit in India, she applauded Prime Minister Narendra Modi for starting an essential movement on cleanliness and sanitation. She said that a campaign like Swachh Bharat is needed to overcome sustainable development challenges and will go in resolving problems of the people.

I think that’s a man (PM Modi) doing every day, normal life politics. That is great, because as we see here, sanitation is getting girls to go to school. So, I think it’s great and addressing the direct problems, PTI reported.

She said the campaign might seem ‘not-so-visionary, not up in the skies’ but is an integral part of people’s life,

It might seem not-so-visionary, not up in the skies but it’s everyday politics and we need that to solve this sustainable development challenges because sanitation is an extremely important part.

On January 7 PM Solberg visited a government primary and middle school in Nithora village of Ghaziabad’s Loni area where she met with children, teachers and locals to interact on issues such as sanitation and female literacy.

We believe that the right to sanitation is an essential component of the standard of living. Sanitation and health are part of ensuring that girls are safe, and they stay in school, she said.

We believe that the right to sanitation is an essential component of the standard of living. Sanitation and health are part of ensuring that girls are safe and they stay in school. – Prime Minister of Norway @erna_solberg says during her visit to Primary School Nithora in UP. pic.twitter.com/fDXkYGZtsF

From discussing about menstrual hygiene to elaborating on how sanitation is depriving girls of education and increasing the gender disparity in India she said,

No country can only use half of its potential, half of its talent. The fact that girls have toilets and sanitary facilities makes it much easier when you are on period, which is one of the biggest obstacles for girls to continue education. We know from different countries of the world that girls often leave school at the age of 10, 11 or 12 because their parents withhold them for domestic duties and also because they feel unclean, and there is no sanitary system that could make it possible, PTI reported.

Swachh Bharat Abhiyan, that was launched in 2014, is in its fifth and final year. The objective behind the nationwide campaign is to make India Open Defecation Free (ODF) and fulfill Mahatma Gandhi’s dream of a Clean India by October 2, 2019. So far, the government has constructed 9 crore toilets (9,09,69,052) and 62 lakh toilets in rural and urban areas respectively. It has been successful in making 21 states and Union Territories free from open defecation. The rural sanitation coverage of the country has increased from a mere 38 per cent in 2014 to 98 per cent now.