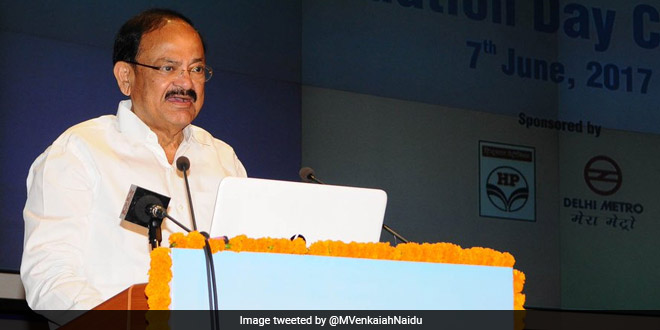 New Delhi: The recent recognition by the World Health Organization (WHO) that the Swachh Bharat Abhiyan will be successful in averting more than three lakh deaths between October 2014 and 2019 has received praise from several corners. Vice President Venkaiah Naidu showered praise on WHO’s recognition of Swachh Bharat as an effective campaign in curbing deaths off more than three lakh people due to unsafe sanitation conditions. Congratulating Swachh Bharat Abhiyan, the Vice President took to Twitter, saying that the WHO recognition was a matter of pride for the whole country.

"Congratulations to villages, districts and states that have been declared #OpenDefecationFree. Construction of 8,01,34,862 toilets is appreciable. #SwachhBharat will lead to Swast Bharat. That way it will become an empowered #Bharat." https://t.co/u8DNMCpywC

The Vice President also congratulated all the villages, districts and cities that have been declared open defecation free (ODF). Lauding the construction of over 8 crore toilets in four years, Mr Naidu said that a Swachh Bharat will pave way for a Swasth Bharat (healthy India), which in turn will lead to an empowered India.

"The @WHO praising #SBM success is a proud moment for us all. I personally extend my congratulations to each who have contributed towards the success of the SBM which helped in stopping 1.8 lakh deaths due to improper sanitation. I hope this passion continues in the same way." https://t.co/h38L9HW15n

WHO’s praise for the Swachh Bharat Abhiyan comes at a time when the Ministry of Drinking Water and Sanitation, the responsible ministry for the rural wing of the sanitation missing, is busy with Swachh Survekshan Grameen, the national survey to rank over 6,900 villages on the basis of sanitation facilities. Several states have launched Swachh Survekshan Grameen, the survey for which will go on till August 31 and results will be declared on October 2. Recently, the Swachh Bharat Abhiyan also got a boost with more budgets being raised for the campaign’s expansion. The Union Cabinet approved the raising of Rs 15,000 crore as Extra Budgetary Resources (EBR) for Swachh Bharat Abhiyan, a move that is likely to benefit over 1.5 crore rural households.