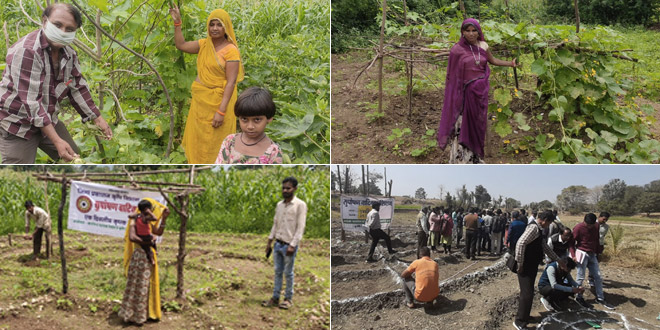 New Delhi: Four-year-old Gudiya Kumari was severely malnourished and was losing her ability to walk properly. Because of malnutrition, the youngest of the four children of Jija Devi and Narsa Ram from Sirwal village of Kotra Block, Udaipur, was prone to falling ill frequently. Narsa Ram told NDTV that Gudiya has been fighting malnutrition since birth but after getting treatment from the malnutrition treatment camp organised in their village by Udaipur district administration, Gudiya’s condition has improved significantly. He added that the district authorities and panchayat have also planted a kitchen garden right outside their house that is producing green leafy vegetables and fruits which helps him feed his family healthier food. “Apart from showing us a way to grow our own food, the district officials visit us frequently and monitor her health every now and then. My daughter has started looking healthier, what else can I ask for?” he said. With an aim to eradicate malnutrition from the district, various district-level departments in Udaipur have come together and started an initiative called ‘Suposhan Vatika’ (nutritional gardens) under which they are creating kitchen gardens also called Nutri-gardens outside their homes to enable families with malnourished children to improve their nutritional status and include a variety of nutritious foods in their diet. The district has already planted over 1,000 such Nutri-gardens in February. It is currently working towards planting 2,000 more gardens.

Udaipur’s Fight Against Malnutrition Among Children

According to Dr. Manju, Chief Executive Officer, Zila Parishad, Udaipur, the district has some of the worst indicators for malnutrition in children in the country which is one of the major issues that the local administration is aiming to tackle. She said,

Malnutrition can lead to various health problems in children and adversely affect their health and education. For a family in rural area, poor health of children could mean that a major proportion of the family’s income needs to be diverted to medical expenditures. The government already has a lot of schemes and so we decided to converge these schemes and various departments to address the problem of malnutrition on war-footing. We even ensured that all our nutrition and immunisation programmes operate without any disruptions during the lockdown imposed due to COVID-19 pandemic. Barring just a week during the initial days of lockdown, the nutrition and immunisation programmes have been running smoothly even during the pandemic as arrangements were made for home delivery of ration and supplementary nutrition. 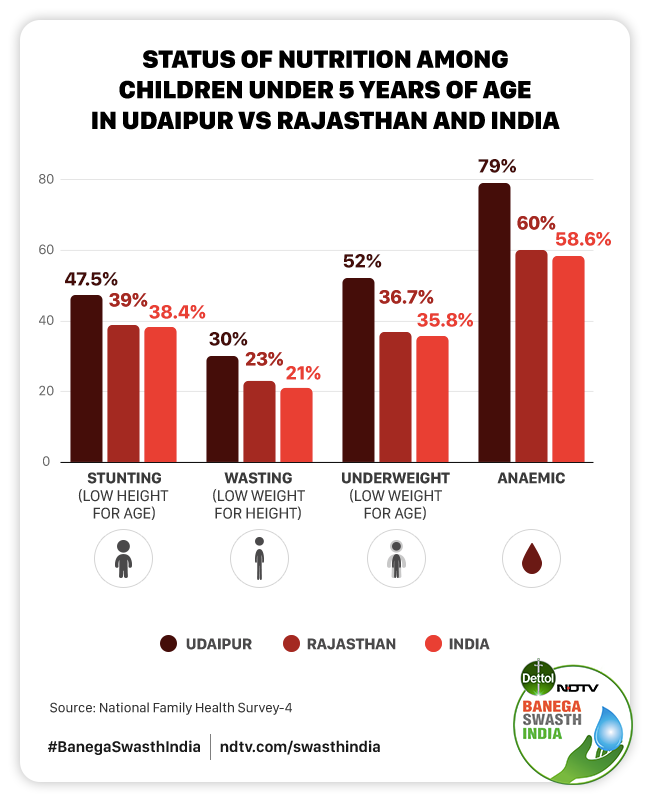 The district’s strategy to fight against malnutrition includes identification of moderately and severely acutely malnourished children, their management via malnutrition treatment centres/camps and plantation of nutri-gardens.

Also Read: As New Hotspots Crop Up In Several Districts Of Rajasthan, Here Is How The State Is Fighting COVID-19 Pandemic

In 2011, the Government of India started Malnutrition Treatment Centres (MTCs) at district hospitals, medical colleges and Community Health Centres (CHCs) where malnourished children from villages are to be brought by anganwadi workers and ASHAs (Accredited Social Health Activist) for at least 15 days for the treatment. However, in Udaipur, the district administration was unable to get an adequate response at MCTs from the people in rural areas.

According to Ms. Anandhi, former collector of Udaipur and the official behind the ‘Suposhan Vatika’ intervention, severely malnourished children from small villages were unable to access these MCTs due to the distance from the village and home and livelihood related commitments of the parents. She said,

To look after the children in the MTCs in villages, we deployed nursing students from private and government medical colleges of Udaipur. We also partnered with NGOs working in these villages for several years. Most of the villages in Udaipur are tribal-dominated and they usually prefer to stay aloof, are always suspicious of the government, so NGOs like Adivasi Vikas Manch helped us to implement the initiatives and win trust of the people. They encouraged people to attend the training and awareness building sessions and bring their children to the camps. 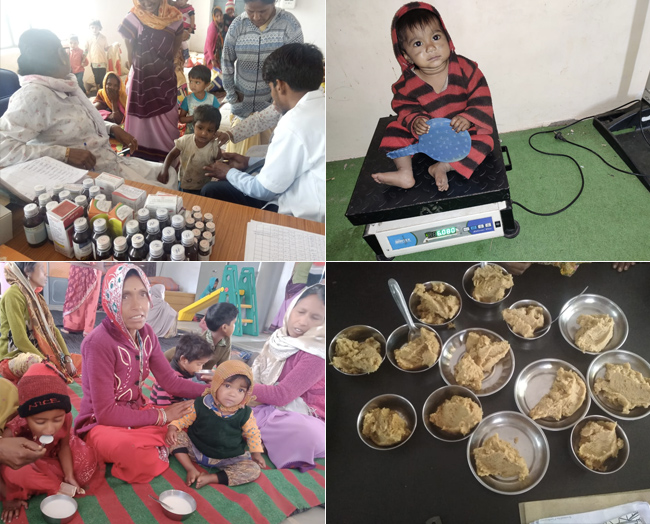 Talking about the anti-malnutrition camps, Dr. Manju said that at every two-hour interval the malnourished children were given special formula feed- Feed75 (75 kilocalories/100mililitre) during the initial phase of treatment and Feed100 (100kcal/100mL) during the later stage when the child regains the appetite, as recommended by the World Health Organisation (WHO), along with medicines required as per other conditions and deficiencies. Formula diets can be prepared locally using cow milk, sugar, vegetable oil, and water. In case a child has developed some other health condition due to malnutrition like anaemia, bronchitis, heart problems among others, then the child is referred to a hospital where he/she receives treatment for that condition free of cost, she said. According to the data provided by the Zila Parishad office, out of almost 3,000 children treated, 208 were referred to hospitals for advanced treatment.

At the end of the 15 days, each child was given nutrition packets which were put together with support from generous donations from the public, said Dr. Manju. The same packets were given to each child who came back to the nutrition centre every 15-day for follow-up sessions for three months after the main treatment. The nutrition packets contained foodgrains, fortified soya oil, fortified pulses, jaggery and other items.

Ms. Anandhi highlighted that the idea of planting nutri-gardens popped up while planning for distribution of nutrition packets for malnourished children. She said,

I was worried about sustaining the progress made by the kids during the 15-day camps. During one of the brainstorming sessions, it was highlighted by an official that there was some fund under Tribal Area Development Department dedicated to creating gardens which was lying unutilised. So we thought why not use the money to set-up kitchen gardens for the families that have malnourished children and encourage them to incorporate such vegetables and fruits in their diet that are rich in nutrition without any extra cost. We then launched ‘Suposhan Vatika’ initiative.

Along with planting Nutri-gardens, the district officials frequently conduct awareness campaigns on the importance of early breastfeeding, need for good nutrition during the first 1,000 days, measures for reducing various anaemia in children and women and immunization among others.

Nutri-Gardens To Tackle Hunger And Undernutrition

We already had the list of children who were malnourished and received treatment at our camps. Our agriculture team reached out to these families to see if they had sufficient land and water to grow their own vegetables and fruits. About 1,040 gardens were planted in February that have already started producing vegetables and fruits. The initiative was then halted due to COVID-19 but now the district administration is gearing up to plant another 2,000 gardens soon. The target is to take nutri-gardens to each of the family with malnourished children in rural areas and hopefully we will be able to achieve it in the next phase, in order to ensure food and nutrition security to them.

Dr. Verma further explained that each of the family was given free-of-cost training on gardening and growing food by the district administration along with seeds of various vegetables and fruits like okra, bitter gourd, ridged gourd, bottle gourd, tomato, eggplant, beans, lemon, guava, papaya among others. In order to avoid chemicals, the circular design of the garden provides for a compost pit in the middle to make organic fertiliser through vermiculture. 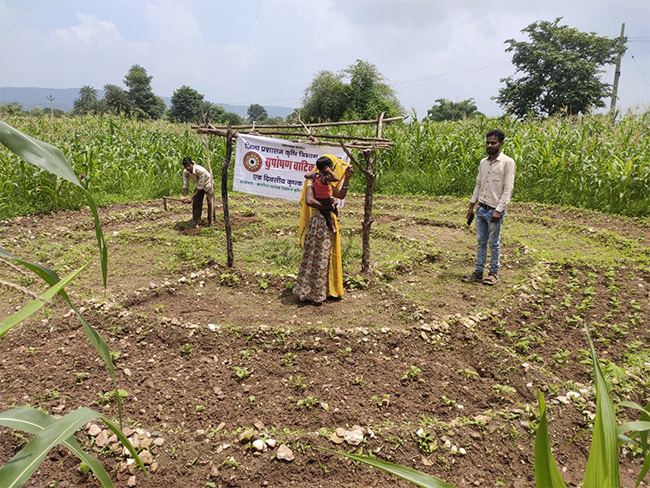 A nutri-garden set-up by Udaipur district administration in Kotra

The district administration also paid the farmers wages at Rs. 220 per day under MGNREGA to encourage them to dedicate their labour and time in maintaining their own gardens. The gardeners growing a nutri-garden of siz3 5×5 metres were paid for 13 days of works, for a garden that is 9×9 metres in size, the keepers were paid for 28 days and those with a garden of size 12×12 metre were paid for 50 days of labour.

Sikudevi, 23-year-old, mother of 3-year-old Omprakash said that because of chronic diarrhoea he suffered when he was seven-month-old, he lost a lot of weight and developed malnutrition. Due to this, he also developed anaemia, she said. Sikudevi, a resident of Kotra Block said,

Ompraksh got the treatment at nutrition camp and his health is better now. My husband, a marginal farmer and I are growing a lot of vegetables in my nutri-garden and I can’t wait to see all the plants bearing the produce. Although we grow grains for our own consumption, we used to buy vegetables from the market and rarely purchased fruits. But now, I have my own vegetables and fruits to feed my child.

Former District Collector of Udaipur, Ms. Anandhi, highlighted that local NGOs and women’s self-help groups were instrumental in reaching out to the families for implementing the nutri-garden initiative. She said,

NGOs and SHGs acted as a bridge between the government and the tribals.

Sarfaraz Sheikh, an expert on tribal issues and activist working with the NGO Adivasi Vikas Manch in Udaipur said that the organisation partnered with district administration in the implementation of nutri-gardens in the villages. He said,

Nutri-gardens are a very useful initiative and have brought hope to some of the most vulnerable families in Udaipur villages. We are glad to be part of this initiative and we will continue to work with the district authorities in order to tackle the problem of malnutrition in villages.

Indian Medical Association Calls Out The Indifference Towards ‘National Heroes’, Releases A List Of 382 Doctors Who Died Of COVID-19

India Sees A Decline Of 70 Per Cent In Under-five Mortality Rate In Past Three Decades, What Is The Way Forward