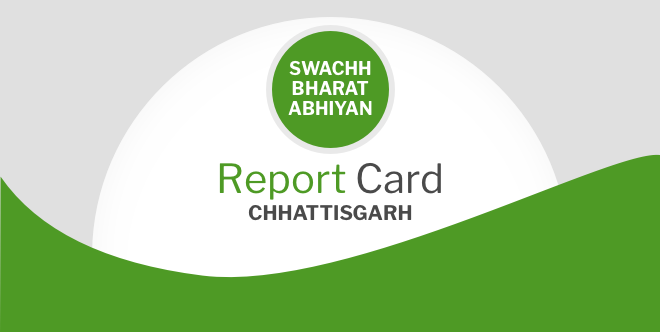 New Delhi: “All my life, I defecated in the open, I don’t want anyone to face the same consequences,” those were the words by late Kunwar Bai, the 105-year old Swachh Bharat Mascot of Chhattisgarh. The centenarian, who spent most of her 100 years defecating in the open decided to sell her 8-10 goats, her only assets and source of livelihood, to raise money to build two toilets at her house. And she didn’t just rest there. Kunwar Bai along with her daughter started educating villagers about the benefits and importance of having a toilet at home and it was because of these efforts, her village Kotabharri and then district Dhamtari became free from open defecation in 2016. Today, Kunwar Bai is no more but her legacy lives on and it is evident from Chhattisgarh’s performance in the Swachh Bharat Abhiyan. From sanitation coverage of mere 10 per cent in 2014 to 100 per cent in 2018. In October last year, Chhattisgarh declared that its rural areas have been successful in eradicating open defecation. This year during Gandhi Jayanti celebrations on October 2, the state plans to make an official announcement just like last year, to declare its urban areas open defecation free (ODF). 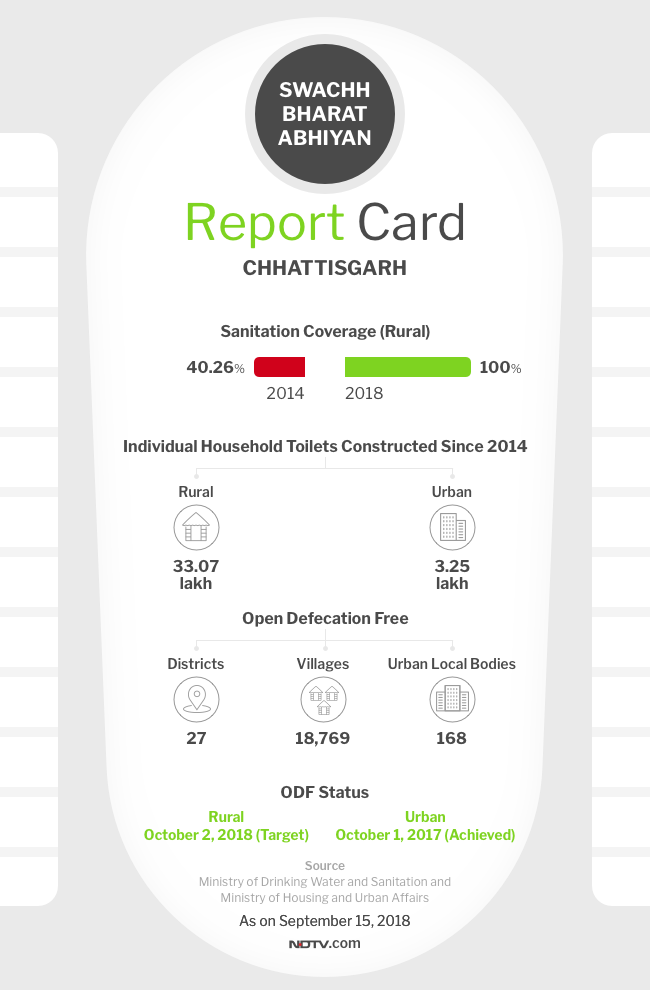 In Picture: Chhattisgarh’s Swachh performance over the years

What sets Chhattisgarh apart from other states of India is how they went about the issue of behavioral change among its people in order to achieve the ODF status. The state didn’t focus on achieving the ODF tag just by constructing a toilet after toilet, instead, the approach was to sustain the open defecation efforts. Explaining Chhattisgarh’s strategy, Swachh Bharat Abhiyan Gramin Officer said,

Now that we have achieved the first goal, we are now focusing on getting the tag of ODF plus and ODF plus plus. For this, we are in many parts are holding regular workshops to teach people the importance of using a hygienic toilet and the benefits of fecal sludge management. In few years’ time, we will be able to achieve this tag as well. Along with this, we are teaching the villagers how to treat their own waste in an effective way.

From Rural To Urban Areas Of Chhattisgarh

On the 148th birth anniversary of Mahatma Gandhi last year, Chhattisgarh declared its urban parts free from open defecation. Today, with the target to achieve ODF Plus and ODF plus plus tag by 2019, the state government has launched two new missions in the urban sectors of the state – ‘Mission Nirmal Cities’ and ‘Mission Clean Cities’.

“We plan to implement the effective fecal sludge treatment plant in all the 168 urban local bodies of Chhattisgarh by 2019, for this we have launched a new mission in the name of ‘Mission Nirmal Cities’ and we are hopeful that we will be able to meet the ODF plus criteria. The other important thing we have undertaken is an effective waste management plan under ‘Mission Clean Cities’, wherein we plan to make all our cities zero-landfill zone just like our model city Ambikapur, which has attained the tag of ‘India’s Best City In Innovation And Best Practices In Waste Management’,” said Niranjan Das, Director Swachh Bharat Urban, Chhattisgarh to NDTV.

He further said that in the state almost 50 per cent of urban areas are already no-landfill zone and in the coming one year, the plan is to transform the other half as well.

We are one of the key leaders in India today when it comes to waste management through scientific ways. We here are segregating the waste in more than 158 categories and are using wet waste for the purpose of composting, while dry waste we are sending for recycling. Moreover, we have banned open burning and incineration process and our making use of even the most basic things such as home dust or items like marbles that are otherwise not recyclable.

Moreover, we have always believed that children are our swachh ambassadors, and that’s the reason why we have always done Information, Education and Communication activities involving them and with them on the forefront. We have made Chhota Bheem our brand ambassador, one of the most favourite cartoon characters among the children and since 2016, we have been doing educative rallies every now and then including Chhota Bheem with a motive to educate the young guns of the state. From waste management lessons to reusing plastic waste, benefits of using a toilet, we have been covering it all, added Mr Niranjan.

Chhattisgarh generates six lakh metric tonnes of waste in a year, out of which the state is processing 84 per cent of the waste effectively. Little wonder then that Chhattisgarh was awarded as the third cleanest state of India after Jharkhand and Maharashtra in the recently held Swachh Survekshan.