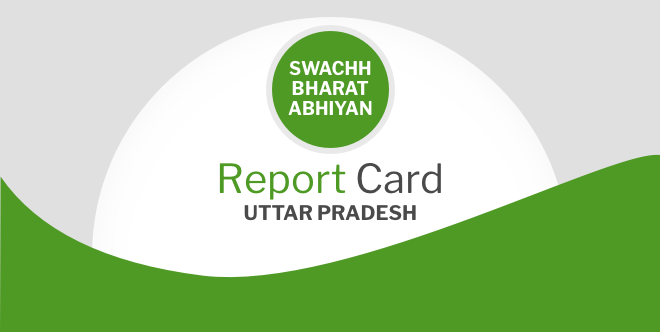 New Delhi: Uttar Pradesh, the most populous state in the country has come a long way since the inception of Swachh Bharat Abhiyan. Back in 2014, when Prime Minister Narendra Modi launched the cleanliness mission, the rural areas of Uttar Pradesh (UP) had only 35.20 per cent of sanitation coverage, but today, it stands at 97.82 per cent and Chief Minister Yogi Adityanath plans to attain the open defecation free (ODF) tag this Rashtriya Swachhta Diwas – October 2, 2018. But until March 2018, UP was no where near its Swachh Bharat Abhiyan goals. In fact, the state was touted as one of the worst performers in the county in terms of sanitation. The state was such that Prime Minister Modi had to intervene and urge the state government to make Swachh Bharat mission a mass movement. PM Modi even suggested the four states i.e., Uttar Pradesh, Bihar, Odisha and Jammu and Kashmir to decentralise the process and form teams at the district level to monitor progress. He also asked the collectors of the four states to take a lesson or two from other states who are doing well in terms of sanitation and create a clean and green India.

Since today the numbers show a massive progress in the toilet construction, the question that pops up is how did UP do it? What is the current status of toilet construction in the state and can it achieve the ODF status this Rashtriya Swachhta Diwas?

According to the data available on government portal – Swachh Bharat Mission (Gramin), till today, 1.7 crore (1,67,96,324) Individual Household Toilets (IHHL) have been constructed in the rural areas of the state. With this, till today, 58,982 villages, 29,295 gram panchayats, 116 blocks and 10 districts have been declared ODF.

Also Read: How Geotagging Of Toilets Is Keeping Duplication Of Toilets And Open Defecation At Bay In This Uttar Pradesh District

Construction of toilets for ODF declaration and ODF verification is being done parallely. Of all places declared ODF, 27,400 villages, 104 blocks and 5 districts have been certified ODF. Currently, we are focusing on IHHL construction and then we will move to community toilets. Till today, 16 community toilets have been built, says Akash Deep, while speaking to NDTV.

Apart from this, district level initiatives and citizen participation too helped the rural counterpart. Like to achieve ODF status by August 15, 2018, Sonbhadra, second largest district of Uttar Pradesh initiated ‘Ab Ki Barsat Izaat Ghar Ke Saath’ (This monsoon build a house of respect) campaign. During monsoon, water logging and insects make it difficult to defecate in open and taking that in their favour government introduced the campaign with a target of 50,000 twin-pit toilets before monsoon. 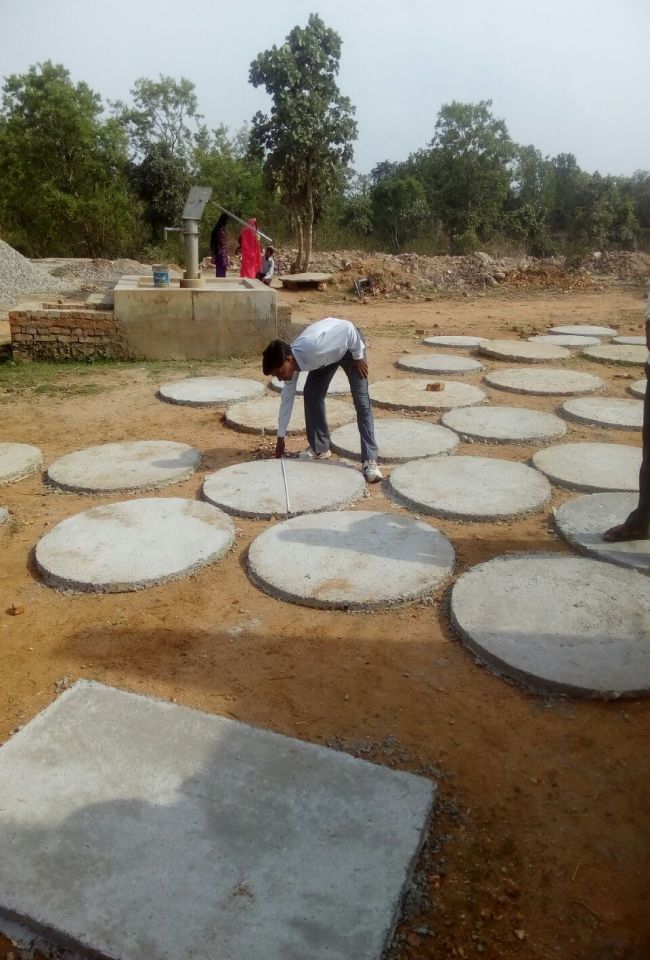 Unable to see his daughter and family going out of the home to defecate in the jungle, Jabbar Shah from Sitapur district of Uttar Pradesh decided to construct a toilet. But the problem was lack of money. To overcome that, Jabbar Shah sold his 7 goats for Rs. 15,000.

Today, toilets are being constructed for the families included in the baseline survey (a survey done in 2012 to identify how many households in India do not have access to toilets). Once that is achieved and the state is declared ODF, the focus will shift to families left in baseline survey.

We have already started the task of identifying families not included in the baseline survey. Once that is done, we will start constructing toilets for them and only then UP will be truly ODF, said Chief Minister Yogi Adityanath, while speaking to Prime Minister Narendra Modi at the launch of ‘Swachhta Hi Seva’ movement.

According to Chief Minister Yogi, cleanliness and health of individuals go hand in hand and results of the Swachh Bharat Mission are clearly visible in the eastern parts of the state.

In eastern Uttar Pradesh, vector borne diseases like encephalitis and diarrhoea were the major reasons behind high number of deaths. But after the cleanliness drive the number of deaths has fallen. This year only six people died due to encephalitis which earlier used to be over 100, the Chief Minister said at the launch of ‘Swachhta Hi Seva’ movement. 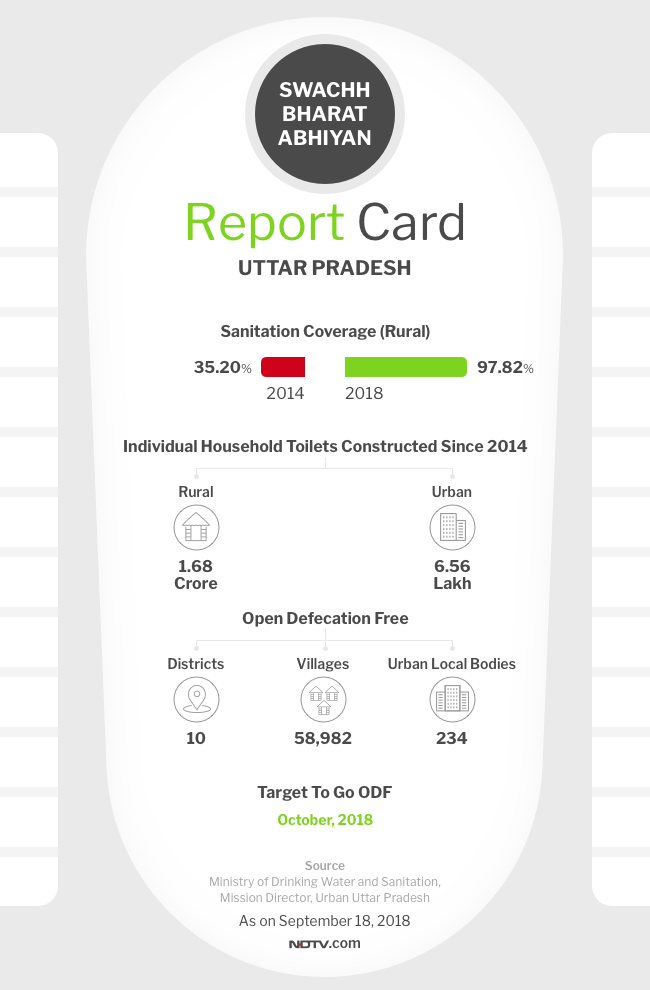 Urban Uttar Pradesh Too On The Road To ODF

“Our target is to declare the state ODF by October 2, 2018 and for the same, we are doing all we can. Of 653 urban local bodies (ULBs) in the state, 234 have been declared ODF of which 83 have been certified ODF by Quality Council of India (QCI). In the process of declaring 633 municipalities ODF, objection has been invited in the newspapers. Also, of 12,007 wards, 11,735 wards have been declared ODF and we are confident of declaring other wards ODF before October 2, 2018”, tells Anurag Yadav, Mission Director (Swachh Bharat Mission), Urban Uttar Pradesh.

Though the state has yet not achieved the ODF status, it has already started working towards ODF+ and ODF++ which includes sustaining the usage of public and community toilets by ensuring cleanliness, achieving sanitation sustainability through solid and liquid waste management.

Under solid waste management, the work of door-to-door garbage collection has been initiated in 7,413 wards of 515 ULBs out of total of 12,007 wards in 653 ULBs in the state. A total of 12 composting plants of capacity 4,615 tonnes per day are operational in different ULBs of the state. We are able to produce 499 tonnes of manure everyday, tells Mr. Anurag Yadav.

The major problem in UP was attitude of people, but to change that, officials undertook IEC activities, instigated city level awareness progammes, took out rath yatras with swachhta messages and slogans written on it. For instance, Bareilly Municipal Corporation (BMC) introduced ‘Roko-Toko’ campaign with an aim to sensitise people on the evils of open defecation. Under the campaign, civic body officials patrolled different areas of the city, caught and warned people found defecating in the open and repetitive offenders were be fined.

Ever since Chief Minister Yogi Adityanath came into power, he has laid emphasis on improving the state’s swachh performance. He urged everyone to do shramdaan for 100 hours in a year. Also, to ensure state performs well in terms of sanitation and cleanliness, he even appointed actor Akshay Kumar as the brand ambassador.

During the launch of Swachhta Hi Seva movement on September 15, Chief Minister asserted, that after coming to power, toilet construction has speeded up. He said,

When we came to power in March 2017, we took the cleanliness campaign as a mission and within 17 months we have been able to construct 1.36 crore toilets in the state.

Since UP has always been referred as one of the worst performing states, what remains to be seen is whether the state will manage to achieve the ODF status or not. If yes, then for how long will it sustain.