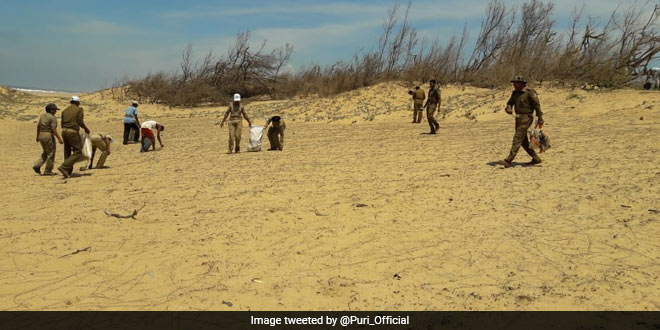 New Delhi: Ahead of the 9-day ‘Ratha Yatra’ also known as the chariot festival, that began in Puri on July 4 the Puri district administration took up various beach clean-up drives, as part of their ‘Mo Beach’ clean-up campaign. The word ‘Mo’ in Oriya means ‘my’, and the campaign started a month prior to the Rath Yatra, aimed at keeping the shoreline of the city clean and beautiful. The first day of the Rath Yatra saw over 10 lakh devotees joining in from various parts of the country, according to the Puri authorities and the number only increased over the eight remaining days. The mo beach clean-up drives are being undertaken in addition to the regular sanitation and cleanliness work carried out by the Puri municipality on the beaches to maintain them during the heavy tourist footfall.

The district administration has received support from the international sand artist and Padma Shri Awardee, Sudarsan Patnaik who is the brand ambassador of the ‘Mo Beach’ campaign. Lauding the campaign as he told NDTV,

It is a nice initiative by the administration to help maintain all the beaches of the district as part of the drive. I have been trying my best to sensitise people by creating sand art about environmental concerns for years. I will not give up until everyone understands the importance of clean beaches and under the Mo Beach initiative; I will create more sculptures to make people aware.

The administration has also received tremendous support from the local communities, civil society organisations, volunteers and gram panchayats to participate in the Mo Beach campaign, a brainchild of Mr Balwant Singh, the District Magistrate of Puri. Mr. Singh, while launching the campaign, tweeted,

We have taken up all beaches of Puri District where the footfall is good, under the initiative of Mo Beach, all 19 Gram Panchayats, Konark NAC (twice a month) and Puri Municipality (all Tuesday) with the help of Volunteer organisations. Please Join,

We have taken up all beaches points of Puri District whr footfall is good under the initiative of "Mo Beach".All 19 GPs, Konark NAC( twice a month) and Puri Municipality ( all Tuesday) with the help of Volunteer org ll drive this on .. Pl Join ????

Support for the campaign also came from the Forest Department which also joined in the beach cleanup activities.

Staff of Forest Department and Nagapatana EDC members have joined in #MoBeach cleanliness campaign. Glimpses of the drive carried out by them at beach near Nuanai, Puri. #BeachCleanUp #CleanPuri pic.twitter.com/IRw1piX1J2

According to the Puri District Administration, thanks to the #MoBeach cleanliness campaign, the staff cleared more than 660 kg of garbage near the city’s golden beach.

The beach cleanliness drive under #MoBeach cleanliness campaign continues.
The staff cleared more than 660 kg of garbages near golden beach, Puri.
Citizens are requested not to throw waste here & there & help in keeping our beaches clean. #SaveOurBeaches #CleanPuri pic.twitter.com/JZXh63oIbX

Puri’s pristine beaches attract over 60 lakh tourists every year, according to Sudarshan Pattnaik. Owing to the heavy tourism, cleanliness is a cause for concern as heaps of garbage can be spotted at most of the beaches.

Mr. Pattnaik hopes that other coastal states and their authorities adapt from Odisha’s initiative and implement similar campaigns in their respective states as keeping our oceans clean and blue should be the need of the hour.