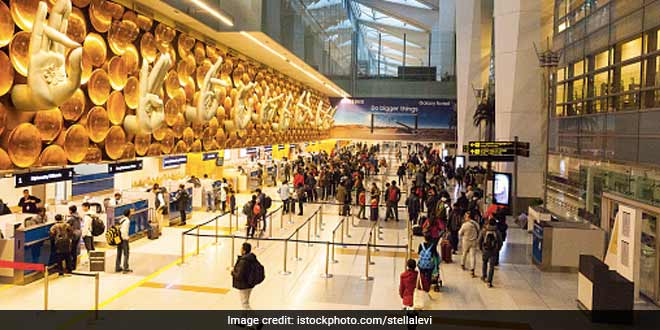 According to passengers, the airport feels like a hotspot with no social distancing norms being followed

New Delhi: As photos of crowds and chaos at Delhi airport surfaced after the government imposed travel rules, in the wake of the emerging Omicron COVID-19 variant, there are concerns about airports becoming a hotspot. NDTV speaks with experts about why even after two years of the pandemic, there is still panic and weak response for curbing the spread and how can airports be prevented from becoming hotspots.

According to the Union Health Ministry’s guidelines issued last week, all passengers coming from “at-risk” countries have to compulsorily take the RT-PCR test and five per cent of passengers arriving from other countries would also have to take the test on a random basis. However, according to passengers, there are no social distancing norms being followed at the airport and the place itself feels like a hotspot. A passenger said,

It takes around five hours to get out of the airport. There are long queues for testing with one to two hours of waiting time. I had to pay Rs 3,500 for the rapid test and then had to wait for 90 minutes for the report. There is a 7-day home quarantine stamp on boarding pass but no one follows-up.

While the World Health Organisation (WHO) has advised that people above 60 years of age and those who have comorbidities such as heart diseases, diabetes among others to postpone travel plans, many other people continue to travel.

While talking about the best ways to deploy to contain the spread of the Omicron in India, Dr Shashank Joshi, a member of the COVID-19 task force in Maharashtra said,

In India, although we have opened up, we have tried our best under the circumstances which are there. In Maharashtra, initially, we were thinking of imposing seven-day institutional quarantine for the people returning from high-risk countries, followed by vigilance on them after that and for non-high-risk countries, a home quarantine. However, it is not easy and practical for the administration to follow it. Airports have become testing labs and these tests need to be done with such efficiency that it can ensure that minimum time is spent in an airport. But the real challenge begins once the person has left the airport and how well they are tracked. The current experience across India has been that tracking and tracing have happened appropriately but there is a possibility and some cases must have missed out. So, it is still work in progress and a lot of things need to be streamlined.

He stressed that there has to be a proper air ventilation strategy, appropriate masking, social distancing at the airport. However, he pointed out that some airports do not have appropriate space. He suggests that if there is a lack of space in the airport, some passengers could be taken to another place where the screening could be done in a staggered, systematic and appropriate way.

We need to recognize that airports are the point of filter where the entry of the variant needs to be tackled. But not just that, tracking them after they exit the airport is equally important. That is why in Mumbai, people who are in home quarantine are contacted five times a day by the administration and subsequently, RT PCR tests are done for them. In these efforts, we need voluntary participation of the travellers and their family members also. They should follow the system voluntarily. In India, the travellers who are coming in the borders try to break the system which should not happen, said Dr Joshi.

According to Subhash Goel, President of the Confederation of the Tourism Professionals of India, keeping people in the holding area for five to six hours is dangerous because if even one person is positive, they can spread the disease while waiting for the report. He said,

After completing immigration and customs, people should be taken outside the airport on the lawn. Hundreds of booths can be set up there for testing. There is no point in keeping people inside the airport for five to six hours. Better to send them home and keep tracking them. There should be strict penalties on people who do not follow home quarantine.

Dr Sumit Ray, Head of the Department, Critical Care, Holy Family Hospital also highlighted the importance of good ventilation. He stressed that the number of cycles of air exchanges should be increased.

Along with improving ventilation, we have to ensure that people have their Covid appropriate behaviour back. People are tired of these measures but we cannot afford to be complacent, said Dr Ray.

Dr Ray also stressed that people should avoid or postpone travelling as much as they can.

Responding to the concerns around the logistical and infrastructure at the airport and the measureS taken to curb transmission, the authority of the Delhi Airport said,

Delhi airport is enhancing infrastructure to manage screening norms. RT-PCR test is mandatory for travellers from ‘at risk’ countries. The number of passengers pre-booking tests on arrival is going up each day. More passengers are opting for Rapid PCR over regular RT-PCR tests. 120 Rapid PCR test machines have been installed; 20 of these counters have been assigned for passengers who pre-booked tests. The seating arrangements for those awaiting test results has been expanded.

Explained: How Quickly Does Omicron Spread & What Is The Severity Of The Disease?