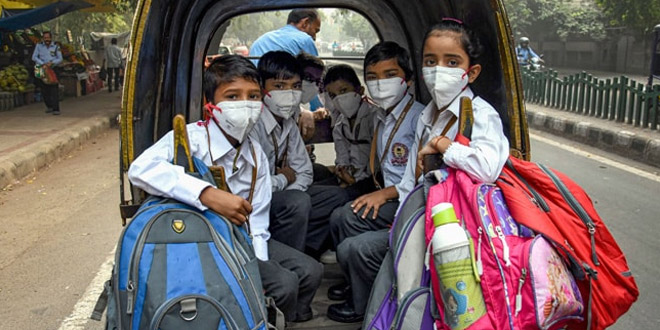 New Delhi: As India celebrates Children’s Day, schools in Delhi and other parts of National Capital Region remain shut, due to the ‘severe’ air pollution in these regions. While Delhi is currently witnessing an Air Quality Index (AQI) of 460, in Noida, Ghaziabad and Gurgaon, the AQI stands at 484, 486 and 420 respectively. According to the Central Pollution Control Board guidelines, an AQI between 0 and 50 is considered ‘good’, 51 and 100 ‘satisfactory’, 101 and 200 ‘moderate’, 201 and 300 ‘poor’, 301 and 400 ‘very poor’, and 401 and 500 ‘severe’. Children living in Delhi and North India are particularly the most vulnerable group facing the impact of the air pollution crisis on their health, as a new report published in Lancet Journal titled, ‘The Lancet Countdown on Health and Climate Change’ points out,

As temperatures rise in a changing climate scenario, children born in India will be particularly vulnerable to a greater health burden of malnutrition, air pollution and deadly heatwaves.

Residents of NCR can’t help but express their frustration over the public health emergency and health risks being posed by the pathetic air quality, which seems to have become an annual issue for North India. A user, among many others, simply pointed out the irony of schools remaining shut on Children’s Day on Twitter,

#ChildrensDay2019 today and sadly our children cant go to school to celebrate it. Instead we have given them SEVERE #AirPollution so that they are cooped inside homes and wonder ask what have they done wrong. #DelhiNCRPollution

What kind of footprints are we leaving for our future generations? questioned a user.

What a way to celebrate Children’s Day! Schools being asked to shut down due to air pollution, said another user as she urged everyone to plant trees.

What a way to celebrate Children's Day!Schools being asked to shutdown due to air pollution.Can we do our small bit for the future generations? Plant a tree with @Envirer_IN. Download the app today .@moefcc @narendramodi @PrakashJavdekar #DelhiAirPollution #ChildrensDay2019

Air is a basic right, this post asserted as the user compared the pollution images from Delhi with the Chernobyl disaster images.

This #ChildrensDay is not #HappyChildrensDay when they're breathing in 3 packs of cigarette air every day.#WakeUpIndia

Delhi, is it really a Happy Children’s Day? asks another one.

Future of our #children in #Delhi .
Today on #ChildrensDay2019 , all the school kids in Delhi NCR have been advised to be in HOUSE ARREST on account of #AirPollution .

What is more shameful than this that all schools in our capital city are closed on #ChildrensDay due to #Pollution, points out an IFS officer.

What is more shameful than this that all schools in our capital city are closed on #ChildrensDay due to #Pollution. We messed things about leaving better #future for our #kids. Now time to leave better kids for the future. Teach them about civic sense & care for #environment.

I remember this was the day I looked forward to as a child.

It's really sad that it has come to this. But it's better for them to stay inside. I remember this was the day I looked forward to as a child. Nevertheless,the #AirPollution levels have not left any option than to keep them away from outside. #ChildrensDay2019