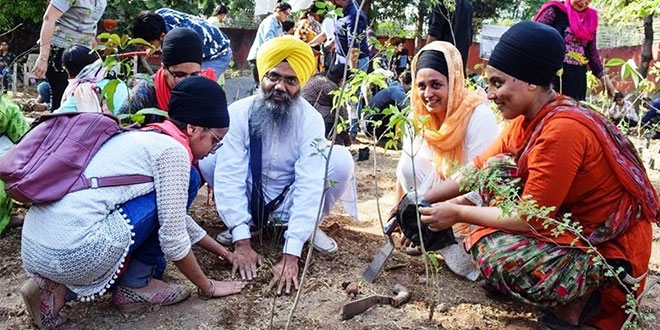 New Delhi: ‘Pavan guru paani pita mata dharat mahat, divas raat dui daee daya kheylai sakal jagat’, says a section (Shabad) in the holy book Sri Guru Granth Sahib in which Guru Nanak Dev ji emphasises on the importance of the environment which translates to ‘Air is our Guru, water is our father and the earth is our mother. They give us life, we sleep in their laps night and day, so we should not spoil them’. Following the message of Guru Nanak Dev, the founder of Sikhism, of protecting the air, water and land, two years ago Sikh communities across the world decided to undertake a massive tree plantation drive to commemorate the 550th Guru Nanak Jayanti (November 12). Gurdwaras, schools, universities, hospitals, and residential complexes under Shiromani Gurudwara Prabandhak Committee (SGPC) and Sikhs in India and in other countries under the leadership of UNDP’s Eco Sikh have planted more than a million trees since the past two years. 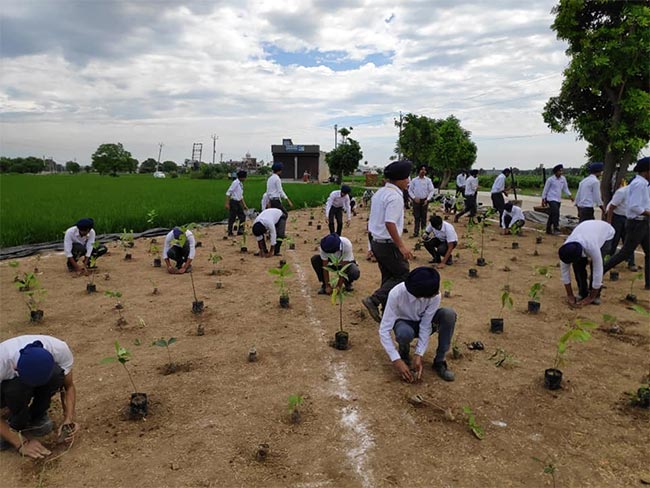 Talking to NDTV about the unique tribute to Guru Naka Dev planned by the Sikhs on the occasion on of 550th Guru Nanak Jayanti, Jaswinder Singh Jassi, Information Officer of SGPC said,

On this day 550 years back, one of the earliest advocates of environment and cleanliness was born. He travelled to distant lands, trying to make us realize that we are all equal and worthy of love and respect. He highlighted the need of keeping our rivers, air and land clean as these are life source of people and animals. He said that the environment is equivalent to our parents and it is our duty to protect it from any harm. But what IS really happening is that we are mindlessly cutting trees for their selfish purposes or in the name of development, the rivers and natural water reservoirs are being reduced to dirty drains and land is becoming toxic too. Plastic can be seen everywhere. So we decided to encourage our brothers and sisters in India and abroad to follow this message of Guru Nanak Dev. Planting trees, it not only helps in fighting air pollution but also helps in keeping the rivers and land healthy as trees contribute in bringing rains.

SGPC is an elected body responsible for the management of approximately 200 Gurdwaras and historical Sikh places of worship in three states – Punjab, Haryana, and Himachal Pradesh and the union territory of Chandigarh. SGPC also has 60 schools, around 20 dental and engineering colleges and two universities in these states. According to Mr. Singh, 550 trees were planted in and around each academic institution, gurdwara campuses and other residential colonies. Mr. Singh added,

The young generation must come forward to protect the planet for the generations to follow. They must be taught to be mindful about the impact of their actions on the environment.

SGPC also received support from the Government of Punjab in the form of manpower and finance with the help of which the committee planted 550 trees in more than 12,000 villages of the state. The State Department of Forest has taken up the task of maintaining the trees. As a part of the initiative, SGPC has created various medicinal gardens by planting medicinal plants and has also encouraging people to grow vertical gardens.

Apart from planting trees, SGPC has been promoting anti-plastic measures to reduce single-use plastic waste. It is due to the efforts of SGPC in collaboration with Punjab Pollution Control Board (PPCB) that The Golden Temple, also known as Sri Harmandir Sahib has become completely free of single-use plastic by banning plastic carry bags and replacing these by bio-degradable carry bags for keeping ‘prasads’, flowers and other prayer offerings. Unlike plastic bags, which take years to decompose, the biodegradable bags can be used to enrich soil post use. Mr. Singh said that similar efforts to stop the use of single-use plastic are being undertaken at various other gurdwaras in India.

‘Eco Sikh’, an initiative started in 2009 by the United Nations Development Programme (UNDP) and the Alliance of Religions and Conservation, UK (ARC), to work globally on environmental issues, also launched a worldwide campaign ‘GuruNanak550’ in August 2018 to invite followers of Guru Nanak to plant 1 million trees in the memory of the Guru to commemorate his 550th birth anniversary. For the same, EcoSikh also launched an Android mobile app called GuruNanak550 to compile the ground report and spread the technical know-how regarding plantation. The App also has the facility to geo-tag the sites of plantation and forests created under the campaign. 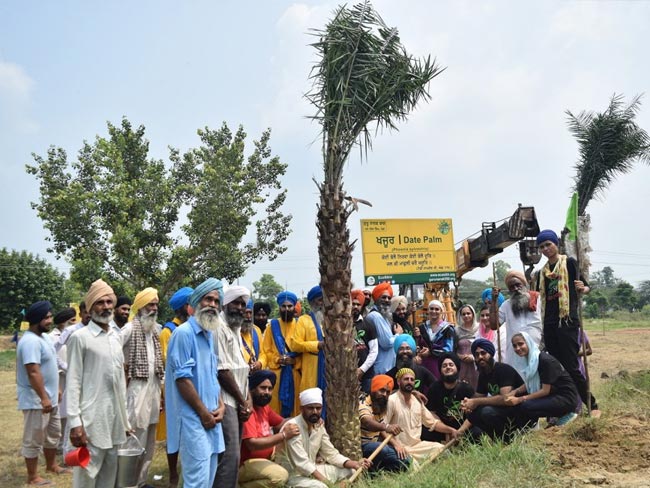 According to Ravneet Singh, Executive member of EcoSikh from India,

Betterment of humanity and environment protection are integral to Sikhism. This campaign has provided us an opportunity to show our commitment to follow Guru Nanak Dev ji’s teachings. So far communities from 12 countries have participated including India, United States of America, Canada, Mississauga, Australia, United Kingdom, Thailand, Malaysia, Myanmar, Mongolia, Pakistan, and Hong Kong by planting 550 trees per community at over 152 spots adding up to a total of 83,600 surviving trees.

As one of the results of their massive tree plantation drives, people from Sikh communities have been able to create over 61 forests in India within only past eight months. These forests having 33,550 trees are spread in Punjab, Haryana, Rajasthan, Gujrat, Jammu and Kashmir, Ladakh and Maharashtra. According to Ravneet, the forests created by communities have also been maintained by them. He said that some of these places have already started attracting various animals.

Along with EcoSikh and gurdwaras under SGPC, other gurdwaras are also undertaking various green initiatives like employing solar power to meet energy needs, reducing the use of single-use plastic, water conservation, and planting trees. These eco-friendly efforts of the Sikh community as whole highlight their compassion towards the environment and the humanity and their principle of ‘Sarbat da bhala’ which means “blessings for everyone” or literally “may everyone prosper”.

Also Read: Heroes Of Swachh lndia: Meet Peepal Baba, The Man Who Has Been Planting Trees For Last 42 Years To Make India Clean And Green