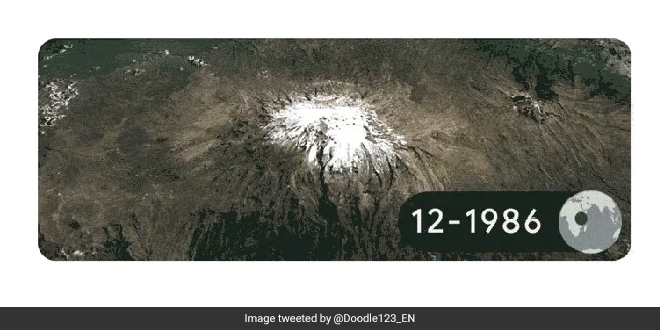 New Delhi: As the world marks Earth Day 2022 today (April 22), Google dedicates the artwork of Google Doodle to one of the most pressing topics of the time: climate change. According to United Nations, Climate change has an ability to affect our health, ability to grow food, housing, safety, and work. It further adds, greenhouse gas concentrations are at their highest levels in 2 million years and emissions continue to rise. As a result, the Earth is now about 1.1°C warmer than it was in the late 1800s, the last decade (2011-2020) was the warmest on record.

Highlighting how climate change has been impacting different parts of the world over the years, Google Doodles artwork showcases real time-lapse imagery from Google Earth and other sources. The 2022 Earth Day Google doodle includes four GIFs that will be rotated throughout the day today, according to the company’s statement.

Also Read: Earth Day 2022: It’s Time To ‘Invest In Our Planet’ And Build A Prosperous And Equitable Future

Stating the consequences of climate change, the Google page reads,

Warmer temperatures over time are changing weather patterns and disrupting the usual balance of nature. This poses many risks to human beings and all other forms of life on Earth.

The first Doodle includes real imagery of a glacier retreat at the summit of Mt. Kilimanjaro in Tanzania. The images used in the time-lapse have each been taken in December from 1986 to 2020.

Another imagery shows a glacier retreat in Sermersooq, Greenland using the images taken every December from 2000 to 2020.

The third imagery that will appear on the Google homepage will be of the Great Barrier Reef in Australia, showing the coral bleaching on Lizard Island. The images used in the Doodle have been taken every month from March to May 2016.

The fourth and the last Doodle shows the Harz forests in Elend, Germany, destroyed by bark beetle infestation due to the rising temperatures and severe drought. The images have been taken every December from 1995 to 2020.

Greenland lost more than a million tonnes of ice per minute in 2019. This #GoogleDoodle of the coastlines of Semersooq shows us what this loss looks like ..

Greenland lost more than a million tonnes of ice per minute in 2019. This #GoogleDoodle of the coastlines of Semersooq shows us what this loss looks like: https://t.co/QAyOmEjRR1 #EarthDay pic.twitter.com/XsekZL8rC5

Africa’s tallest peak, Mt. Kilimanjaro has lost nearly 80% of its snow caps since 1912.

Africa’s tallest peak, Mt. Kilimanjaro has lost nearly 80% of its snow caps since 1912 and here’s why: https://t.co/QAyOmEjk1t

Keep a lookout on the homepage for a new #GoogleDoodle, every few hours. #EarthDay pic.twitter.com/VCP5XeJG4q

Urging people to live more sustainably and help save planet earth from the ill effects of climate change, Google said,

Acting now and together to live more sustainably is necessary to avoid the worst effects of climate change.

Earth Day is observed every year on April 22. This year, the theme for Earth Day 2022 is “Invest In our Planet”. Stressing on the ‘time is now’ and calling for urgent climate action, Earth Day 2022 calls people to, “Act (boldly), innovate (broadly), and implement (equitably). It’s going to take all of us. All in. Businesses, governments, and citizens — everyone accounted for, and everyone accountable. A partnership for the planet.”

This is the 52nd anniversary of Earth Day. The first Earth Day was celebrated in 1970 that demonstrated against the impacts of 150 years of industrial development which had left a growing legacy of serious human health impacts. Since then according to Earth Day Organisation, the day has helped mobilise one billion people and engaged over 190 countries.