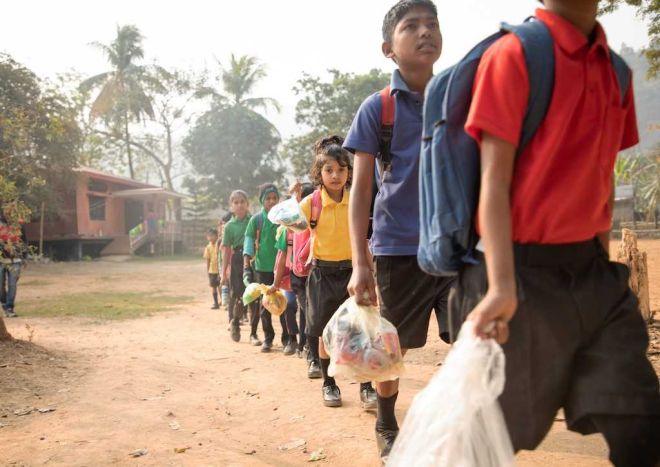 New Delhi: Picture this traditional school scene – a morning bell, hustle and bustle of school kids rushing to their respective classes with school bags tucked in their shoulders. That’s a typical early morning scene of any school, but at Assam’s unusual school— Akshar that is situated in the pristine woods of Pamohi, around 100 underprivileged students come daily with polythene bags full of plastic waste in their hand along with their school bags. The reason for carrying plastic waste is that the school authorities have made it a rule here that the children can access education for free and the only fee that will be collected from them will be segregated plastic waste from their home, on a daily basis. As a result of this practice, today the school has managed to collect more than 4,000 plastic bottles and some 700 plastic packets. Not just that, the school children have also made a beautiful structure inside the school premises, all made with plastic. 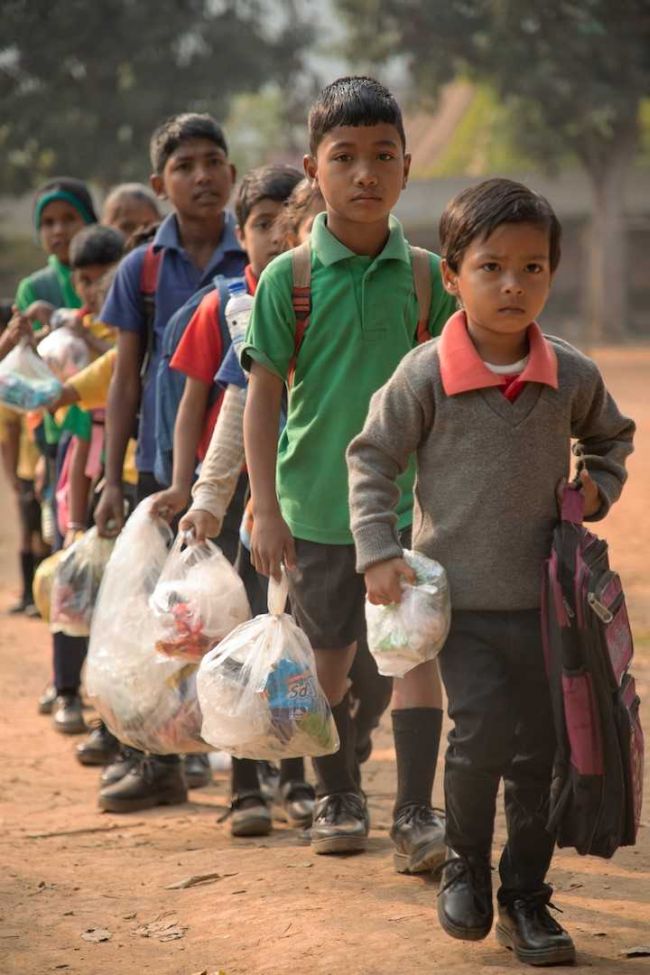 The everyday routine at Akshar school includes children lining up near the entrance gate with their school bags and a plastic bag, full of other plastic items

This is not like any other typical school in India, here we accept different age group students who have the will to learn something. Unlike the traditional class system that is from Class 1 to Class 12, we have levels, where the students of various age groups according to their aptitude and knowledge get admitted. And the curriculum of the school has been designed in such a way that the child does not only get the formal education but also learns about the issues prevailing in the society.

The school curriculum includes an array of vocational courses such as recycling, upcycling, singing, dancing, solar paneling, embroidery, to name a few. Three times a day, in a week, students are also introduced to environmental studies for an hour, where all these students help in managing plastic waste all by themselves thereby understanding the many harmful effects of plastic and waste.

We want each and every student to learn about the challenges that are prevailing in the society and come up with the solutions to fix it. We want them to be the leaders of the change and not just any other people who add to the problem, adds Mr Thakur as he explains the role of the students in plastic waste management at school.

The authorities have asked the students to get segregated plastic to school – bottles and wrappers. Then the plastic collected is further converted into simple eco-bricks, which are basically plastic bottles filled with different kinds of plastic wrappers. Thrice a week, students make eco-bricks and for making one eco-brick, school authorities give them Rs 17 that is deposited in their school bank, which these children can further use for their future needs.

This model was introduced by us for a few simple reasons – First, it will not only make children aware of the importance of waste segregation but will also pass on a few lessons to their parents. Secondly, by converting waste into something useful, these children will know the importance of recycling and upcycling. Moreover, the money given to them for making these bricks will help them in the future, as a result, they will always stay motivated about bringing the green change, adds Mr Thakur. 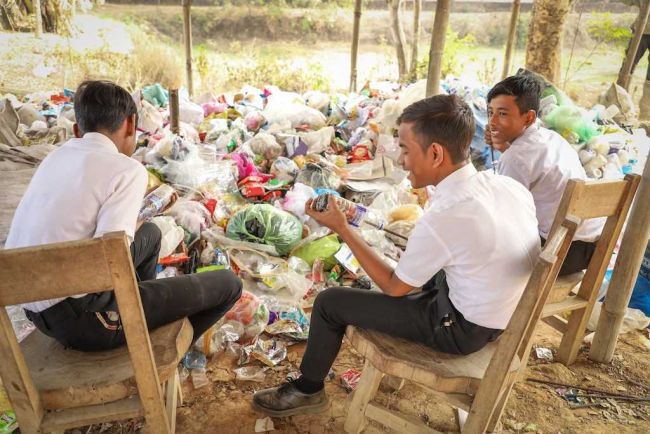 For now, the school has 1000 eco-bricks, out of which 500 have been used to make a beautification structure in the school premises, and another half the authorities have saved with an aim to construct toilets.

Apart from collecting plastic waste from home, these students on a weekly basis, go and collect plastic waste from the nearby community or restaurants as well. The students are also a part of various awareness campaigns within their society so that more people can understand the importance of their work and contribute in some or the other way. 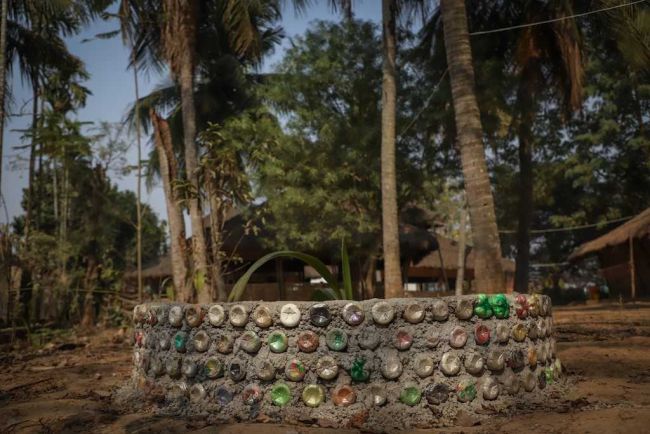 Akshar school has utilised more than 4,000 plastic bags full of other plastic items and have recently installed a decorative installation within the school premise using eco-bricks made out of plastic bottles and plastic wrappers

The Story Of Akshar School

In 2013, Mazin Mukhtar came to India from New York on a different school project and met Parmita Sharma, a Masters student in Social Work at the Tata Institute of Social Sciences (TISS). The common interest of working in an education sector brought them together and in 2016, both of them founded Akshar in Assam with the aim to provide the children with more than just education and prepare them on how to save the world.
Today, Akshar school is helping to bridge the gap between conventional academics and vocational training in India and is working with different government schools to help educate underprivileged children for free.

The model in which the school is running is with a target to transform 100 different government schools in India in five years time. The school helps trains and employs older students or society people as teachers for younger students, thereby helping both of them earn something.

IPL 2019: In Bengaluru, Flags Get A New Lease Of Life, Get Upcycled Into Bags, Street Vendors Get It For Free