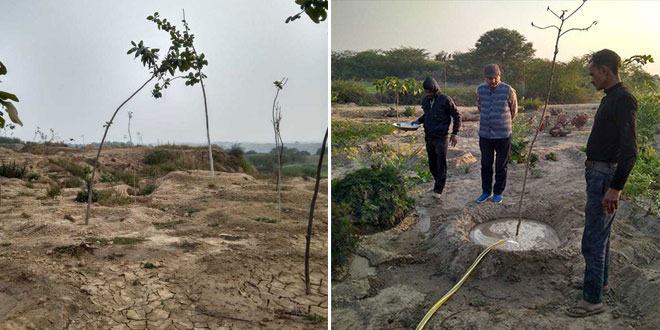 New Delhi: A green cover of less than 2 per cent was what drove people of Firozabad to make a change, says Neha Sharma, District Magistrate (DM) who is leading the massive tree-plantation initiative in the district along with the District Forest Department. The administration and people of the district have been on a tree-plantation spree since last two years to increase the present forest cover of 1.99 per cent which is abysmally low in comparison to the recommended limit of 33 per cent of the total area of a district by the Ministry of Environment, Forest, And Climate Change. Currently, the district has planted over 21 lakh trees till now and has even managed to make its ravine areas which have dry and unproductive soil, to go green. Achieving green cover in ravine areas appeared impossible to the Forest Department at first but the determination and will of the local villagers made the feat possible.  Ms. Sharma says,

Near the Yamuna River in Firozabad, on both sides of the highway towards Lucknow, we have over 15 hectares of ravine land. It was considered as a bad land as it suffers extreme soil erosion. I am glad to share that on one side of the highway, in over 7 hectares of land, we have planted more than 3000 trees. With care and support of the local villagers, we have been able to achieve a survival rate of 98 per cent of the trees planted. We will replicate the same on the other side of the highway this year before the monsoons.

Further elaborating on the need for afforestation drive in Firozabad, Ms. Sharma said that the administration also received an impetus from the state government of Uttar Pradesh as Firozabad, which is almost 40 km away from the iconic Taj Mahal in Agra falls under the Taj Trapezium Zone (TTZ). TTZ is a defined area of 10,400 km around the Taj Mahal to protect the monument from pollution. Areas falling under TTZ are supposed to increase their green cover by encouraging afforestation and other activities to protect the environment. Block development Officer Prabhat Mishra said,

Green Ravines: How Was It Made Possible?

Converting ravines into green areas was a challenging task for the administration of Firozabad. Mr. Mishra said,

When we started tree-plantation while marking the land for afforestation, we consulted the district office of the Department of Forest for using the barren ravine land as well. The forest officials were apprehensive about this move as the soil is considered unhealthy in these areas.

According to Mr. Mishra, the forest officials felt, planting trees in the ravine areas was a waste of time and resource. However, when the officials of the Firozabad Municipal Corporation went to the site along with the officials of the Forest Department and met the local people in the nearby villages, they felt motivated as the village headmen came forward to take up the responsibility of making the ravine land green with the support of the district administration.

As per Ms. Sharma, the designated land was first ploughed in the month of June and July, just before the rainy season, and a number of pits were dug. These pits were then left to be exposed to the rainfall. In the meantime, a system for irrigation was developed by laying a pipeline from the nearby stretch of Yamuna. After a few showers of rain, when the soil became softer, more than 3000 herbal and fruit trees including neem, mango, and rosewood were planted. A person was employed full-time under the Mahatma Gandhi National Rural Employment Guarantee Act 2005 (MGNREGA) to take care of the plants. The people of the nearby villages in the guidance of the village heads and block development officials also took care of the trees. Now, after almost one and a half years, when the forest department visited the site for an assessment, it was found that about 98 per cent of the trees were able to survive and are in a healthy state.

The District Forest Department will measure the forest cover of the district after three years, in 2021, as per a statement from the department. The statement further informs that the Forest Survey of India (FSI) defines ‘forests’ as all lands, more than one hectare in area, with a tree canopy density of more than 10 per cent. Ms. Sharma says,

We will definitely see a great improvement in the forest cover of the district in the next forest assessment considering the regular tree-plantations being done in the district. There is a sense of ownership for this movement among the people living around the tree-plantation sites and this will show.

She further informed that the preparation for the next tree-plantation in the coming monsoons has been started already. Special nurseries have been created and the required pieces of equipment have been sanctioned for this purpose. Almost 3 Lakh trees will be planted by the Forest Department in this year’s monsoon season to cover the rest of the ravine area.

To intensify the mission of growing more trees and instilling the feeling of environment protection among the young generation, the DM along with Mr. Mishra started ‘Green Oath Monday’ in Schools. Ms. Sharma said,

In the time to come, it is the children who will sustain the idea of a green and clean environment. With this movement, the sense of belonging towards the environment should be inculcated in school children. This will also instil a sense of ownership towards the tree planted by them and they will take care of the trees. We will continue practising afforestation and other measures to promote a clean and green environment.

800 National Cadets Corps Champion The Cause Of Menstrual Hygiene