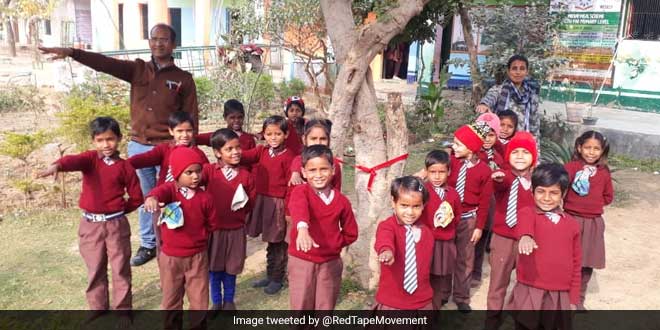 New Delhi: Monday (January 7) morning wasn’t a usual one for the school students of Firozabad district in Uttar Pradesh. The morning assembly happened as per routine and after the prayers what followed was something students were briefed about. As part of ‘red tape’ movement, the youngsters were asked to tie a red ribbon around a tree and take an oath to save trees for clean air and environment. Following the footprints of Mahatma Gandhi, the father of the nation, who has rightly said, “The world has enough for everyone’s needs, but not everyone’s greed”, students pledged for mindful utilisation of natural resources.

So much impressive green grassroot work in India!
This is the red tape movement, out of Firozabad, Uttar Pradesh.
Every monday students in every village will tie a red tape on a tree and and take an oath to save trees.
Inspiring! pic.twitter.com/XmHSL7Dau6

We have initiated the concept of ‘Green Oath Monday’ where every Monday, students will tie a red ribbon on a tree and take the pledge to not only protect trees, but also biodiversity, water bodies and making their village free from plastic. The first oath was taken on January 1, which was a Tuesday, but from now onwards, it will happen on every Monday. Also, it is not only limited to school students, but everyone.

‘Green Oath Monday’ has been introduced as part of the Red tape movement which is to raise awareness about the dangers of deforestation. In 2008, when Mr Misra was posted in Etawah, he started the Red tape movement and on June 5, 2008, he formed the world’s first student parliament on environment. Talking about his green initiatives, Mr Misra says,

To take tree plantation a step higher, Mr Misra started seed dispersal also, under which he would carry variety of seeds with him and disperse them whenever or wherever he found an empty land. During his tenure in Etawah, Mr Misra managed to plant 10,000 fruit and flower bearing trees with a survival rate of minimum 60 per cent.

If I have donated a sapling to someone then ideally it is his/her duty to nurture and maintain it. Some people supported the movement and some didn’t, but despite this, we managed a decent survival rate, says Mr Misra.

In the year 2018, when Mr Misra was transferred to Uttar Pradesh’s Firozabad district, he was given the task to eliminate the practice of open defecation by making villagers construct and use toilets. For the same, he introduced ‘Toilet Parliament’ under which the onus of clean toilets was put on the villagers. As part of toilet parliament, a toilet is for the people, by the people and of the people. The first toilet parliament was formed in Mohammadpur Nadayi village on an experimental basis.

In Firozabad, my focus shifted to sanitation and hygiene and I recently realised, how I left my baby ‘red tape’ movement. So to bring it back, we introduced ‘Green Oath Monday’, says Mr Misra.

Firozabad, which is some 40 kms away from the iconic Taj Mahal in Agra falls under the Taj Trapezium Zone (TTZ). TTZ is a defined area of 10,400 km around the Taj Mahal to protect the monument from pollution. Areas falling under TTZ are supposed to encourage afforestation and activities to protect the environment.

The idea of ‘Green Oath Monday’ cropped up to instill the idea of environment protection among children. In time to come, it is the children who will sustain the idea of green and clean environment. With this red tape movement, this sense of belonging should be inculcated in school children so that everyone has that sense of ownership, says Neha Sharma, District Magistrate, Firozabad.

Further elaborating on the afforestation in Firozabad, Ms Sharma says,

I am glad to share that near Yamuna, we have ravine area which is basically called bad land as it suffers soil erosion, there we have planted numerous trees that too with a survival rate of 90-95 per cent.

After all this, Firozabad district plans to continue practising afforestation and activities to promote a clean and green environment.

Air Pollution: Washington University To Be Part Of A Study On Air Quality Evaluation In Delhi