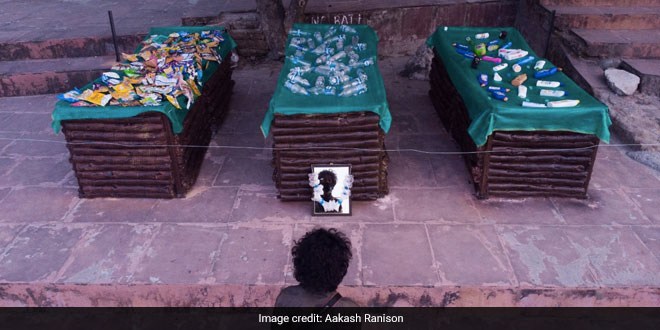 New Delhi: At Freedom Ghat, situated right below the Laxman Jhula in Rishikesh, Uttarakhand, visitors are welcomed by one-of-its-kind pyre. The three deathbeds positioned at Freedom Ghat are made out of single-use plastic waste giving out the message that ‘plastic is killing humanity’. Single-use plastic deathbeds, the brainchild of climate activist Aakash Ranison, have been built using over 3,000 single-use plastic bottles, wrappers, and containers that is equivalent to 26 kilos of plastic. The art installation, created by a team of climate warriors, aims to make plastic, an invisible killer, visible. While talking to NDTV, about the initiative, 25-year-old Aakash Ranison said,

We are not only using plastic but also consuming it. A human being generates an average of 26 kgs of plastic wate every year. Microplastics have entered our ecosystem, and food cycle and in some or the other way, it’s contributing to our death. A recent study revealed microplastics in the placentas of unborn babies. Through our art installation, we are trying to show people the result of generating plastic waste and consuming microplastics.

The three deathbeds, each of size 8 feet x 3 feet x 3 feet are dedicated to a particular kind of single-use plastic. While the first one is fashioned out of plastic wrappers including empty packets of chips, chocolates, and biscuits, the second deathbed is made using single-use plastic bottles and the third pyre is created with plastic containers like discarded shampoo bottles.

Single-use plastic deathbeds are made out of 26 kg of discarded plastic bottles, containers and wrappers

The deathbeds are accompanied by a mirror, placed right in front of the central funeral bed. The mirror reflects the harsh reality that the plastic human beings use recklessly has the power to kill them and everyone around them, explained Aakash. Plastic waste has entered our food and environment. A recent study conducted by researchers from the Hull York Medical School and the University of Hull found microplastic content of 0-10.5 microplastics per gram (MPs/g) in molluscs, 0.1-8.6 MPs/g in crustaceans, 0-2.9 MPs/g in fish. According to another study commissioned by the environmental charity WWF (World Wide Fund) International and conducted by University of Newcastle, Australia in 2019, humans may be ingesting five grams of plastic a week.

Talking to NDTV about the impact of consuming microplastics, Meena Sehgal, Senior Fellow at The Energy and Resources Institute (TERI), said,

Some of the plastic products contain phthalates, chemical compound, that has the potential to disrupt hormones and affect kidneys in the long run.

Dr Lata Ghanshamnani, Ophthalmologist and co-founder of NGO RNisarg Foundation, which looks in education and awareness and management of all kinds of waste, also suggested that plastics contain chemicals and ingesting microplastics can impact the immune system, reproductive organs and also lead to cancer.

Aakash believes that when someone stands in front of the pyre and looks into the mirror, they will be reminded of the plastic waste they have generated. 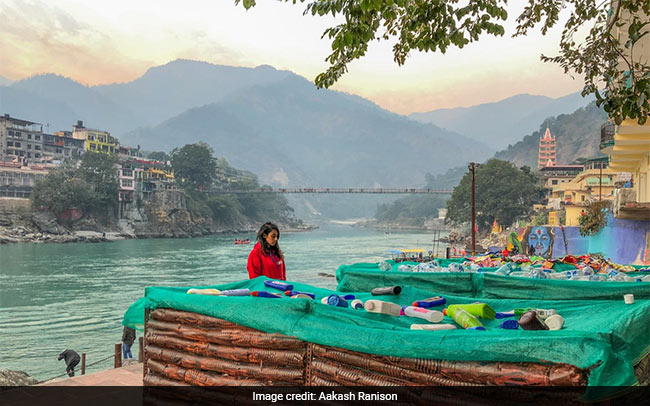 The installation is a war cry to wake people up to see how ignorantly they could be killing themselves and their progenies, said Aakash.

The art installation was created with support from the Municipal Corporation, and the locals over a period of six days.

Talking more about the installation and the feedback from the tourists, Aakash said,

We installed deathbeds around the holiday season so it has witnessed a huge footfall of around 36,000 people so far. People who stopped by the installation were shocked and left with a thought of their plastic consumption. After the exhibition is over, the plastic waste will be sent for recycling.

The project promotes sustainable living and includes creating awareness, mobilising people to segregate their waste, and conducting clean-up drives in Rishikesh. In the last four months, Aakash and his team of volunteers have conducted six clean-up drives and collected 230 kgs of plastic, glass and other kinds of waste.

Aakash who has been vocal about climate change and has been advocating United Nations’ Sustainable Development Goal 13 Climate Action called to live in harmony with nature. While signing off, he said,

It’s just one bottle, said 7.8 billion people and look at how much plastic waste we have today.

Cutting COVID-19 Infectious Period Even By One Day Could Prevent Millions Of Cases, Study Says