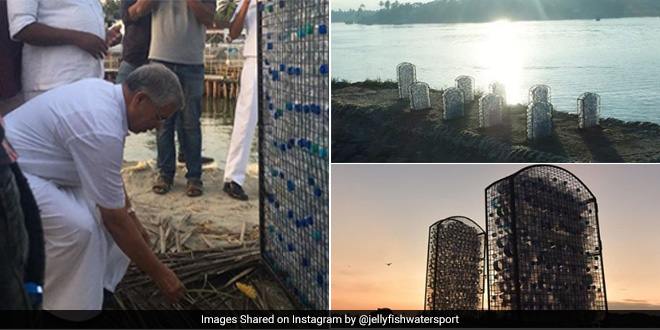 New Delhi: Prompted by the rising plastic pollution in the oceans, Jellyfish Watersports, an eco-friendly water sports and activities organising group, in Kozhikode district of Kerala has built the Marine Cemetery entirely from single-use plastic. Part of Kozhikode District Administration’s Clean Beach Mission, the aim of the plastic Marine Cemetery is to raise awareness on the exploitation of marine life caused by erratic human actions. While talking to NDTV about the initiative, Kaushiq Kodithodi, founder Jellyfish Watersports said,

Post floods, while we were kayaking in the Chaliyar river, it was horrifying to see the volume of plastic in the surrounding areas. We, humans, are digging the graves for these marine species, literally. We have used and abused single-use plastic, creating havoc in our water bodies and rapidly pushing marine life towards mass extinction. So we thought let’s show people exactly what they are doing, by creating an installation that acts as a constant reminder.

According to a member of the watersports organisation, earlier in November, a team of about 80 volunteers cleaned up Beypore beach and collected over 800 kilograms of plastic waste which they handed over to Kozhikode Municipal Corporation for recycling. 2,000 plastic bottles were left behind which were later used for building the monument.

Kerala:A 'Marine Cemetery' at Beypore Beach has been built using plastic bottles. Captain Aswini Pratap, Port Officer, Kozhikode says,“It's a symbolic reminder & an awareness initiative to make people aware that as we continue to dump plastic,species of fish are being eradicated” pic.twitter.com/ahTZL4wzPl

Jellyfish Watersports took to social media to urge people to visit the cemetery, and take a pledge to eliminate single-use plastic from their lives and thus help in eliminating plastic from water bodies. The Marine Cemetery was opened on December 4, to commemorate the World Wildlife Conservation Day. The watersports company is now planning to take the initiative to various cities across the country.

Aakash Ranison, climate activist who has been associated with the building of the cemetery from the initial stages said,

This Marine Cemetery is built to jolt mankind, to make them realize the blunder they have done. And, parallelly educate them about the fact that flora and fauna in and around our rivers and oceans are on red alert. It’s time to take steps towards course-correction.

Why The Use Of Single-Serve Plastic Is A Threat To Marine Life?

According to Plastic Pollution Coalition, a global network working towards a world free of plastic pollution, it is estimated that by 2050, the oceans will contain more plastic than fish, by weight. This is because every day around eight million pieces of plastic pollution find their way into our oceans. Experts say that 100,000 marine mammals and turtles and 1 million sea birds are killed by marine plastic pollution annually.