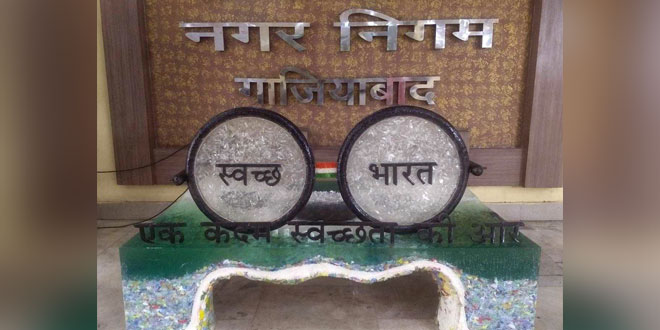 New Delhi: Ghaziabad Municipal Corporation just got an innovative ‘Swachh Bharat’ art piece in its campus made out of 200 kilos of seized polythene and has decided to get many more such sculptures made in the next few months. The sculpture weighs 380kgs and is 6ft length X 4ft breadth X 4ft height. The Municipal Corporation conducted a drive in June this year as an attempt to make Ghaziabad polythene free by seizing polythene in various markets in Ghaziabad and by July, they collected about 50,000 kilos of polythene. After this, the question of disposing of the polythene started to hover. It was then, in August that a duo of young artists approached the Additional Municipal Commissioner Promod Kumar with their idea of creating sculptures made from seized polythene.

Using around 200 kgs of polythene which was provided by Ghaziabad Nagar Nigam, this innovative #SwachhBharat themed art piece was created.
With such innovative practices, we will achieve a cleaner and greener Bharat.#MyCleanIndia #SwachhBharat pic.twitter.com/lsX7GpjIyP

Additional Municipal Commissioner Promod Kumar said, We are very impressed by the sculpture that Sarfraz and Sakshi have created out of seized polythene. We have decided to use their skills in utilising all the seized polythene and get similar sculptures made which can be kept at the roundabouts, roadsides, parks and other public places. I think this is a great way of utilising polythene and other plastic waste.

Sakshi Jha, one of the artists said, “My co-artist Sarfraz Ali and I knew that the local government of Ghaziabad is working hard to ban polythene and tonnes of polythene have been seized by the municipal corporations which are of no use. So we decided to use this massive amount of toxic polythene and plastic waste and convert them into art. We have been working with plastic since last two years.”

The idea was welcomed by Ms. Ritu Maheshwari, District Magistrate, Ghaziabad and she directed the Municipal Corporation to donate 200 kilos of polythene to the duo to create a sculpture. “We took a model of India made with polythene when we met to pitch the idea of using the seized polythene. She gave us a very encouraging response and with the motto of making our city clean and beautiful, we started working on creating Swachh Bharat sculpture”.

Effective Recycling of waste-200 kg waste polythene provided by nagar Nigam used to build this sculpture; more shall be installed at various places across city pic.twitter.com/Kpr0a9T8dz

Talking about the sculpture, Ms. Jha said that they used liquid acrylic for building sculptures from plastic waste and it took them about two months to complete the Swachh Bharat Logo sculpture that is kept at Municipal Corporation office, which will be inaugurated soon. The artist duo belongs to a group called ‘Luxuary Reloaded’ that work on creating new art forms, sculptures, furniture (tables, benches, chairs, etc.), tiles, fountains, vase, and many more utility products using plastic waste. They are now in talks with the Municipal Corporation about installing sculptures at various places in Ghaziabad utilising all the seized polythene.