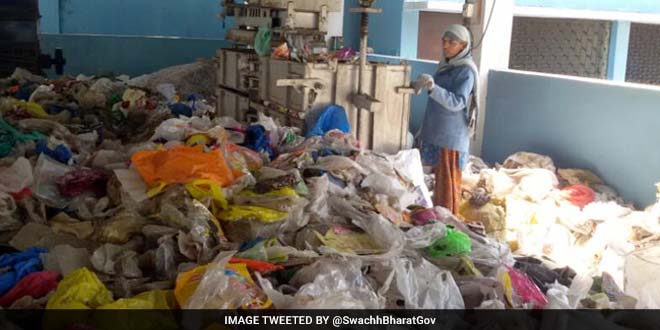 New Delhi: From being one of the biggest littering items, stagnating water bodies to choking drains during monsoons, plastic waste has turned into a crisis that needs to be addressed immediately. Plastic or polythene bags, these non-biodegradable toxic items have been playing a major role in degrading our environment, especially our oceans. But now there might be a solution to tackle this mounting problem, using plastics to build roads.

In 2015, the Indian government made it mandatory for all road developers in the country to use plastic waste for road construction after Rajagopalan Vasudevan, a professor from Madurai’s Thiagarajar College of Engineering, laid out a process of building roads by recycling plastic waste. While trial and error experiments are on across the country, cities like Chennai and Indore are already using this technique.

On June 20 Chennai municipal administration minister SP Velumani had stated in the state assembly that so far a nearly of 1,600 tonnes of plastic waste has been used in constructing 1,035.23 kilometres length of roads. The N.S.C Bose road, Halls road, Ethiraj Silai street and Sardar Patel street in Chennai are layered with plastic components. While the plastic roads may be a new concept in many parts of India, Chennai has been experimenting with it since 2011. “The plastic tar roads have not developed any potholes, rutting, raveling or edge flaw, even though these roads are more than four years of age,” read a performance report by India’s Central Pollution Control Board (CPCB).

The Pune Municipal Corporation (PMC) tied up with the Rudra Environmental Solution (India) Ltd and gave them a contract of building 12 trail plastic roads across the city. These roads were constructed in housing societies which suffered from broken roads due to water clogging during monsoons.

Plastic helps in increasing the durability and flow of roads. It will take atleast 2 years for the plastic roads to get more durable and the cost is expected to come down to Rs 30,000-40, 000, says Shirish Phadtre, Director, Rudra Foundation.

Similarly in India’s cleanest city Indore, which is presently recycling half of its plastic waste daily, utilising elements of plastic in road making is slowly gaining a momentum. Of the 13 tonnes of plastic waste that the city generates daily, nearly 30 per cent of it is being used for road construction. Roads using shredded plastic were introduced in the state by Madhya Pradesh Rural Road Development Authority and so far it has constructed more than 500 kilometres of roads which are 7 metres wide. After these roads were tested for its durability and quality, similar experiments were carried out in urban roads. A total of 30 kilometres of roads are layered with plastic in Indore.

The Not-So-Difficult Technology Behind Plastic Roads

While layering roads with plastic waste may seem like a complicated, costly and time consuming affair, the reality is quite the opposite. The plastic waste collected from all over the city is sent to plastic collecting centres where all the waste goes through the process of shredding, a technique where all the dust particles are eliminated  and plastic items are shredded into fine pieces, explains Asad Warsi, a Swachh Bharat Mission Consultant with the Indore Municipal Corporation.

The shredded plastic is then mixed with a mixture of bituminous concrete or tar as it is commonly known as. Depending on the quality of tar, a 10-30 per cent of it is replaced with the waste plastic, “The shredded plastic and tar are separately heated at a very high temperature, once these melt they are mixed together and the resulting mix is used for road construction. Since both, tar and plastic are petroleum products they gel well together,” adds Mr Warsi.

In terms of monetary benefits, using waste plastic instead of tar is definitely a cost effective option says Mr Warsi, “A mere 10-20 paise is spent per kilo of shredded plastic, whereas Rs 20 is spent on one kilo of tar.” Hence, if plastic waste is channelised in road construction across India, the civic bodies can save upto Rs. 2500 per tonne. In addition to this, no new machinery is required for producing this mixture and the maintenance cost of the road is almost nil. The process of shredding takes place at a bare minimum cost.

The roads made out of plastic-tar combination have proved to be eco-friendly. Tar is fossil fuel and hence by reducing the usage of tar, we are indirectly reducing carbon footprints, says Mr Warsi. Besides, there is no leaching of plastics and no effect of radiation like UV on roads. There are no liquid industrial effluents and no floor washings as it is a dry process. There are no organised stack and process emissions, read the CPCB report.

When asked about the quality of roads, Mr Warsi says, “the strength and finishing of roads when waste plastic is used is much better than tar.” These roads have a better resistance to water and water stagnation as well. The huge problem of water clogging on roads during monsoons is likely to decrease as the plastic roads have lesser chances of being striped or developing potholes. In other words, the life span of the road is substantially increased.

Of the total waste generated by every city of India, 20-30 per cent is plastic waste. If all the civic bodies make it a point to recycle plastic waste and use it for road construction then a few years from now the volume of plastic waste can come down, says Srigopal Jagtap, Head of Solid Waste Management and Sanitation at BASIX, a non-profit organisation.

Given the current plastic crisis, the aim of all the countries should be to make sure that plastic waste does not reach the landfills or water bodies. And to ensure that, the 3 R’s – Reduce, Reuse and Recycle are implemented effectively. If plastic waste can be used to build roads then it will be a huge load off the planet that is currently choking on plastic.

Also Read: Save The Planet, Make A Green Switch: This Woman Is Fighting The Plastic Menace And Has Made Cutlery From Sugarcane