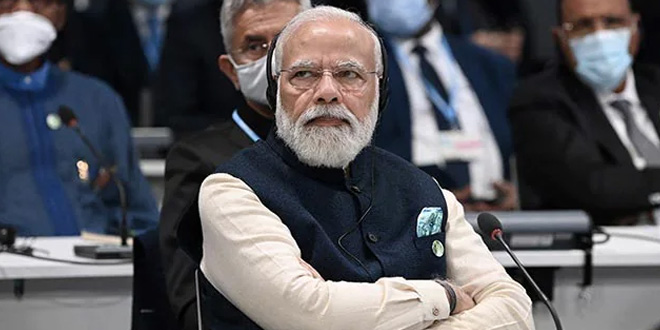 New Delhi: Prime Minister Narendra Modi on Thursday said that the World Health Organisation (WHO) must be reformed to build a more resilient global health security architecture and especially pitched for streamlining its approval process for vaccines and therapeutics to keep the supply chains stable and predictable.

In his address at the second global Covid virtual summit, PM Modi, highlighting India’s role in combating the coronavirus pandemic, said New Delhi would extend its genomic sequencing network to the neighbouring countries.

The prime minister, who participated at the summit following an invitation by US President Joe Biden, said India adopted a “people-centric” strategy to combat the pandemic and that it was running the largest vaccination campaign in the world, adding close to 90 per cent of the adult population and more than 50 million children were already vaccinated in the country.

The prime minister noted that India laid the foundation of a WHO Centre for Traditional Medicine in the country last month to “make this age-old knowledge available to the world”.

Noting that the pandemic continued to disrupt lives, supply chains and to test the resilience of open societies, the prime minister said a coordinated global response is required to combat future health emergencies.

It is clear that a coordinated global response is required to combat future health emergencies. We must build a resilient global supply chain and enable equitable access to vaccines and medicines, PM Modi said.

The WTO rules, particularly TRIPS need to be more flexible. WHO must be reformed and strengthened to build a more resilient global health security architecture, he said in the opening session of the summit.

India has been pressing for the TRIPS waiver to ensure scaling up of the vaccine production for equitable and global access.

We also call for streamlining WHO’s approval process for vaccines and therapeutics to keep supply chains stable and predictable. As a responsible member of the global community, India is ready to play a key role in these efforts, PM Modi said.

In his address, the prime minister highlighted that India’s Genomics Consortium has contributed significantly to the global database on the virus and added that New Delhi will extend this network to countries in its neighbourhood.

In India, we extensively used our traditional medicines to supplement our fight against COVID and to boost immunity, saving countless lives. Last month, we laid the foundation of ‘WHO Centre for Traditional Medicine’ in India, with an aim to make this age-old knowledge available to the world, he said.

Referring to India’s handling of the pandemic, PM Modi said the country has fully vaccinated almost 90 per cent of the adult population and more than 50 million children.

Our vaccination programme is the largest in the world. We have fully vaccinated almost 90 per cent of the adult population, and more than 50 million children. India manufactures four WHO approved vaccines and has the capacity to produce five billion doses this year. We supplied over 200 million doses to 98 countries, bilaterally and through COVAX. India has developed low-cost Covid mitigation technologies for testing, treating and data management. We have offered these capabilities to other countries, PM Modi said.

The prime minister said the Covid pandemic continues to disrupt “lives, supply chains, and tests the resilience of open societies.”

In India, we adopted a people-centric strategy against the pandemic. We have made the highest ever allocation to our annual healthcare budget, he said.

PM Modi participated in the first global virtual summit on Covid-19 hosted by Biden on September 22 last year as well.

The second summit intends to galvanize new actions to address the continued challenges of the Covid pandemic and build a stronger global health security architecture.

A White House fact-sheet on commitments from the governments and other partners at the summit said India will continue to extend booster coverage to eligible populations and expand vaccinations to those under age 18.

It said the country will continue working towards complete vaccination coverage for its adult population. With the increased funding allocated for the 2022-2023 domestic health budget, the country will provide insurance coverage for healthcare workers, and increase the number of health and wellness centres, it said.

According to the fact sheet, India will also increase the number of integrated public health and regional disease control laboratories, as well as bio-safety labs.

It said the country is increasing “zoonotic surveillance and will continue to supply vaccines and work on extending a SARS -CoV2 genomic consortium to neighbouring countries.”