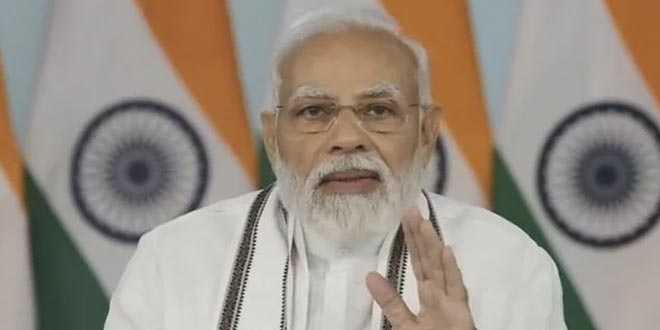 New Delhi: Prime Minister Narendra Modi on Wednesday said the challenge of the Covid pandemic is not fully over yet, with the increase in coronavirus cases in the last two weeks manifesting the need to stay alert, and underlined that vaccination remains the biggest protective shield against the virus. Speaking at an interaction with chief ministers on the emerging COVID-19 situation in the country, the prime minister also said the government’s priority is to vaccinate all eligible children at the earliest with special campaigns needed in schools.

At the interaction, Union Health Secretary Rajesh Bhushan gave a presentation where he discussed the rise of cases across several countries in the world and in some Indian states, a Prime Minister’s Office (PMO) statement said. Asserting that India has fought a long battle against Covid in the spirit of cooperative federalism enshrined in the Constitution, Prime Minister Modi lauded the chief ministers, officers and all corona warriors for their efforts.

Modi asserted it was clear that the coronavirus challenge is not fully over yet. Omicron and its subvariants can create problems as is evident in case of many countries of Europe, he noted, adding that these sublineages are causing a surge in many countries.

He said India has been able to deal with the situation better than many countries. Still, in last two weeks, increasing cases in some of the states show that we need to stay alert, Modi said.

The Omicron wave was handled with determination and without panic, and in the last two years, all aspects of the coronavirus fight whether related to health infrastructure, oxygen supply or vaccination, have been strengthened, he asserted.

In the third wave, none of the states saw situation going out of control, PM Modi asserted. This, the prime minister added, should be seen in the context of the massive vaccination drive.

He said vaccination has reached each and every person and it is a matter of pride that 96 per cent of the adult population is vaccinated with at least one dose and about 84 per cent people above 15 years of age having received both the doses.

Vaccine, according to experts, is the biggest safety shield against the coronavirus, he said. Noting that schools have opened after long time and some parents are worried over the increased number of cases in some places, Modi expressed satisfaction that more and more children are getting vaccinated.

He pointed out that in March the campaign to vaccinate children in the 12-14 years age-group was started, and on Tuesday, emergency use authorisation has been granted to Covaxin shots for children in the age bracket of 6-12 years.

Our priority is to vaccinate all eligible children at the earliest. For this, as before, special campaigns will also be needed in schools. Teachers and parents should also remain aware on this front, Mr Modi said.

He also said precaution doses are available for all adults in the country to strengthen the vaccine “protective shield”.

Teachers, parents, and other eligible people can take the precaution dose, he added. The prime minister said during the third wave of Covid, India witnessed up to three lakh cases per day and all states handled the situation while also allowing social and economic activity to continue.

This balance should be maintained in our future strategy also, he said.

Our scientists and experts are continuously monitoring the national and global situation. We have to work on their suggestions with a pre-emptive, proactive and collective approach, he said.

Stopping the infection at the very beginning has been our priority and it should remain the same even today.

We have to implement our strategy of test, track and treat equally effectively, he said.

He also stressed on the need for continued upgradation of health infrastructure and medical manpower.

Union Home Minister Amit Shah spoke about the recent increase in Covid cases in some states, and underscored the need to follow the ‘test, track, treat, vaccinate’ strategy and ensure Covid-appropriate behaviour, the PMO statement said.

The chief ministers thanked Modi for the timely guidance and support since the start of the pandemic and noted that this review meeting has been called by the prime minister at the right time, the statement said.

They gave an overview of the status of Covid cases and vaccination in their states, it added.

Uttar Pradesh Chief Minister Yogi Adityanath said Prime Minister Modi’s mantra of life and livelihood is being followed by the state. He also mentioned that a high number of cases are being seen in the state’s cities in the National Capital Region (NCR).

Delhi Chief Minister Arvind Kejriwal noted that in the recent days the national capital has witnessed a high positivity rate. He also spoke about masks having been made mandatory again, according to the statement.

Mizoram Chief Minister Zoramthanga said the prime minister’s strong support and guidance has helped the state tide over the previous waves. He also thanked the central government for support in other health matters and development issues.

Haryana Chief Minister Manohar Lal Khattar pointed out that a high number of cases in the state are mainly being seen around Delhi, in the cities of Gurugram and Faridabad, according to the PMO statement.