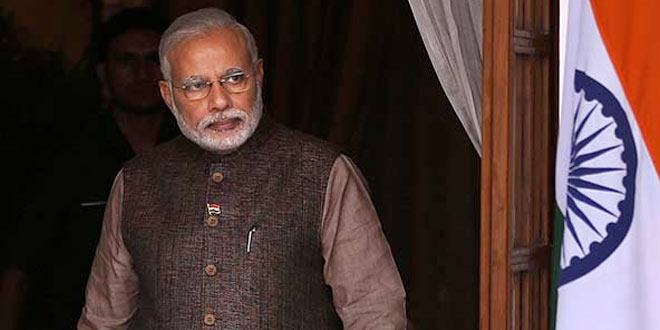 New Delhi: Prime Minister Narendra Modi will inaugurate tomorrow an exhibition to mark the 100 years of Mahatma Gandhi’s Champaran Satyagrah. The exhibition to be held in the national capital will be titled ‘Swachhagraha – Bapu Ko Karyanjali – Ek Abhiyan, Ek Pradarshani’. He will also launch an ‘Online Interactive Quiz’ at the event which is being organised by the National Archives of India. The quiz will continue for 30 months till October, 2019.

In a series of tweets today, PM Modi said the Champaran Satyagraha was a historic mass movement which had a phenomenal impact and urged the countrymen to become ‘Swachhagrahis’ and create a Swachh Bharat.

Tomorrow I will join a very special program, ‘Swachhagraha – Bapu Ko Karyanjali’ to mark 100 years of the historic Champaran Satyagraha, he posted on Twitter.

There will be an exhibition showcasing Champaran Satyagraha and it will connect essential principles of Satyagraha with Swachhagraha, he said.

The exhibition will also showcase the ground covered by the Swachh Bharat Mission in creating a mass movement towards a clean India.

The exhibition will also showcase the ground covered by the Swachh Bharat Mission in creating a mass movement towards a clean India.

A century ago, Indians became Satyagrahis and fought colonialism. Today, let us become Swachhagrahis and create a Swachh Bharat.

Champaran Satyagraha was a historic mass movement led by Bapu. Its impact was phenomenal, the Prime Minister said.

Champaran Satyagraha was a historic mass movement led by Bapu. Its impact was phenomenal. https://t.co/8lj84DYVsy

The exhibition will be available for public for a month from Tuesday after inauguration by PM Modi tomorrow at National Archives of India (NAI) here, NAI Director General Raghvendra Singh told a press conference here.

The exhibition is a tribute to Mahatma Gandhi on hundred years of his first experiment of Satyagraha in India, in Champaran and is an attempt to sensitise future generations to fulfill his dream of ‘Swachh Bharat’, Singh said.

Home Minister Rajnath Singh and Culture Minister Mahesh Sharma are expected to attend the event. The exhibition will also be showcased in other cities of the country after a month.

Mahatma Gandhi had arrived in Champaran, a district in Bihar, in 1917 to take up the cause of the farmers who were forced to grow indigo, instead of food crops, by the British.

Champaran Satyagraha was the first non-violence action initiated by Mahatma Gandhi, who during his stay in Bihar, also delved in detail with the social problems like scavenging, illiteracy, and issues related to women and health.